Black Christmas Director Sophia Takal on Her Story of ‘Misogyny, Lurking in the Shadows’ 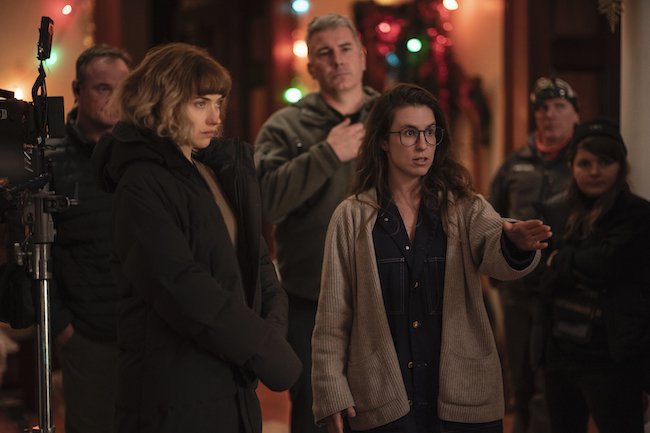 Bob Clark’s Black Christmas, released days before Christmas 1974, largely invented the slasher genre. But what struck director Sophia Takal about the film—in which a madman preys on sorority women around the holidays—is the intelligence and complexity of those women.

“I saw the original like a decade ago with a group of dudes who were my friends at the time,” says Takal, whose new interpretation of Black Christmas is in theaters Friday. “I was so struck by how well-drawn the female characters were. They all had different points of view but they weren’t catty or stupid, or depicted how I’d always seen sorority sisters portrayed.”

To call her new film a remake misrepresents the mission of this Black Christmas, and lowballs its ambitions. Takal and her co-writer, film critic April Wolfe, have plunged their fists into the toxic viscera of misogyny pulsing in the heart of Clark’s original. Their film, a Blumhouse release, contains a purer extraction of the original Black Christmas’ alarm call to women. The original film starred Olivia Hussey, as well as a young Margot Kidder. The new film stars Imogen Poots.

Sophia Takal, an actress and writer as well as director, talked with MovieMaker about her past films, including Green and New Year, New You, her dynamic with Wolfe, and making a horror film with a nuanced look at gender.

MovieMaker: In a way Black Christmas isn’t unfamiliar territory for you. You’re working with Blumhouse again, it’s horror, and it’s largely focused on a group of women. But in other ways I imagine it’s a big expansion for you, in terms of budget, crew size, and production schedule, at least.

Sophia Takal: Yeah! It has been a big expansion experience. My last feature New Year, New You, which was for Blumhouse, was only a 15-day shoot, where this was 27 days. Blumhouse approached me earlier this year, in February or March of this year and said we have the rights to Black Christmas, we don’t have a script but we want it to come out in December, can you write and shoot a movie in nine months? There was an exhilarating energy to making this movie. When I said yes I had no idea whether I could pull it off. But this is something that myself, Jason [Blum] and April Wolfe, my cowriter, have all talked about, that the movie itself really tapped into something. That energy, that rage, that vitality that reflects how a lot of women feel right now— might have gotten tamped down if we had more time to second guess ourselves.

MM: I’ve read that you didn’t realize going into your first feature, Green, that you were going to make a thriller. You had anticipated it being something of a mumblecore character study. How does it feel now to find yourself at the helm of such a beloved horror property?

ST: My husband and I joke about this. In reality I am a goofy person who is not particularly dark, so it’s funny that I’ve found this niche and been able to explore a lot of darkness within it. It’s not what I would have expected of myself when I started making movies. I certainly could not have foreseen this trajectory when I started acting in movies. I love horror. I love being able to dive into social issues using the horror format, but keep an audience thrilled and entertained. That said, I’m very interested in expanding beyond horror into other genres. For me it’s always about characters. For Always Shine, I had these crazy feelings of rage toward another woman in my life. I wanted to kill her somewhat, honestly. That lent itself to a horror movie. I focus first on the feelings I’m having and the characters I want to explore before I settle on what genre they’re best for. Next it could be a romantic comedy.

MM: On the subject of your evolving interests, moving from Always Shine to New Year, New You now to Black Christmas, you seem to be shifting from a focus on the dynamics between women in relationships to the dynamics of relations between men and women.

ST: When they offered me the movie, one of the first things I said was that I don’t want to make another movie about women who hate each other. Probably because I was not feeling those feelings toward the women in my life. I was feeling uplifted by not only the women in my life, but by the community of marginalized voices speaking out against the terrible things going on in the world. The fact that those voices are all deriving strength from one another was really inspiring me. There’s a book called Good and Mad by Rebecca Traister that is all about women’s rage being a driving force of social change. I was interested in telling a story where women, even though they had different points of view on what was wrong with the world and how to address those problems, respected each other’s differences and drew strength from one another. That’s what I was seeing in the world around me, not women tearing each other down.

MovieMaker: There is a scene toward the end of the film that I’ll talk around, because I don’t want to spoil anything, that complicates that vision of female solidarity. So I’ll just ask—why did it feel necessary to communicate that women will not always unite in harmony against the patriarchy, that some will voluntarily reinforce it regardless of the consequences?

Sophia Takal: I could not get my mind off the 53% of white women who voted for Trump. I’m fascinated by these women who vote against their interests. I didn’t want to make a movie that said all women agree and all men are bad. The reality is much more complicated, and I think we can all acknowledge that by now. I wanted to include male and female characters that spoke to these nuances and complications. The film is set against a backdrop of an old, white, male entitlement that is obviously feeling very threatened in our world right now, but that power doesn’t extend to or protect all men. I wanted to reflect that. It’s the same with the women in my film—not all women agree with what feminists want. Many feel comfortable and safe in the world the way as it is now. I also wanted to acknowledge as a white woman our complicity in the status quo in the way that we keep down other marginalized communities. That was really important for April and myself to show.

MM: I’d be curious to hear about your relationship with the original Black Christmas, Bob Clark’s beloved 1974 slasher.

ST: When Blumhouse approached me with a remake, I rewatched the original, and something else struck me. It was when Olivia Hussey finally kills her boyfriend, who we’ve come to believe is the bad guy. Once she falls asleep, you find out he wasn’t actually the bad guy, there’s someone still lurking in the shadows. You never see his face, never find out who he is. What that represented to me was misogyny, lurking in the shadows. You can’t ever fall asleep, you can’t stop fighting, because toxic masculinity is always waiting in the shadows trying to destroy you.

I was feeling that strongly when we had started to work on the movie. Brett Kavanaugh had just been confirmed to the Supreme Court, Louis C.K. was doing stand-up comedy again. These predatory men were getting book deals, re-entering public life without any real act of public contrition. I started to feel that perhaps all this progress is cyclical. This Kavanaugh thing was just like Clarence Thomas. There was a feeling of camaraderie with other women when the #MeToo movement and #TimesUp started. We thought, we’re going to make a difference, we’re going to make a change, and it so quickly turned into something different. We’re still obviously working, trying to make progress, but I felt a darkness creeping back in earlier this year. I felt like the original Black Christmas tapped into that anxiety. We can never be asleep. We’re always going to have to fight, even when we think we’ve made progress, they’re still waiting in the wings.

MM: The thing that strikes me about the original Black Christmas is the way misogyny is depicted. It’s so primal, its practically pre-verbal, with the phone calls the killer makes to the sorority. It’s like Bob Clark tapped into a raw, prehistoric force of misogyny, that’s actually kept quite implicit in the film. In your film, however, it’s like you’ve made explicit that force, you can see its structure and organization.

Sophia Takal: Yeah, oh man. I’ve been thinking about this a lot. My movie does go for a more explicit articulation of ideas than the original. But we’re not living in subtle times. The misogyny is so explicit. The way we receive it is in our faces. It made sense to me to be in dialogue with that in an overt way. The other part came from April, who is an incredible writer and very much a part of the horror community. We talked a lot about how Black Christmas was one of the first, if not the first, slasher movie. It created an entire subgenre. We felt we wanted to honor the innovation of the original Black Christmas by moving the slasher forward. From the original Black Christmas all the way through to Scream you see a full arc, landing on a meta narrative of the subgenre itself. At this point, to make a straight-ahead slasher without this extra flourish, if you will, there was no point. For me and April, it was important not to redo the original but do what the original did for the genre—to move it ahead.

Black Christmas, co-written and directed by Sophia Takal, is in theaters now.