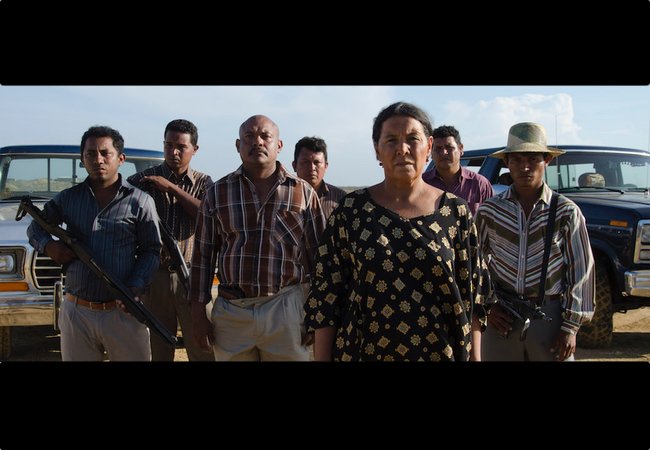 Depicting the ancestral culture of the Wayuu—a Native American group indigenous to northern Colombia—and shedding light on their complex relationship with death and dreams, directors Cristina Gallego and Ciro Guerra intended for Birds Of Passage to be, above all, a tale of the human spirit.

Our film begins its journey with the roots of the Wayuu’s intrinsic values of respect and innocence and eventually moves toward their complete transformation, when those values are tragically engulfed by the world of drug trafficking.

As the cinematographer, one of my primary focuses was to allow for Birds of Passage’s dream sequences to exist as experiences that wouldn’t be too distanced in visual terms from the rest of the story. In these sequences, the veils that cover characters’ faces depict Wayuu traditions carried out during periods of mourning. Such visual motifs establish a realistic depiction of the Wayuu’s shared states of connectedness and ancestral and cultural expression. Our imagery in Birds of Passage explores pain and wakefulness as visual metaphors as well—turning them into surrealist pictures, much like the paintings of René Magritte from which we drew heavy inspiration.

The use of spherical lenses and a 2.35:1 aspect ratio allowed us to capture the immense geographical landscapes of the Colombian Guajira. We chose to juxtapose our characters against this natural backdrop in a way that would shrink them within the frame, to accentuate the feeling of estrangement and loneliness instilled within them by their environment. (This trick, often found in gangster movies, is something we wanted to appropriate.)

Taking advantage of the color palette found in the locations in which our story is set, we made use of warm colors like red, yellow, gold, and earth tones. These colors became the basis of a chromatic structure that we modified throughout our shoot. Each of Birds of Passage’s five acts has a specific color range and, accordingly, a subtle color cast that defines the interiority of the characters.

Our first act, “Wild Grass,” concentrates on the idea of innocence, which is presented in the vivid colors commonly associated with the Wayuu. The second act, “The Tombs,” adopts a monochromatic scheme, with gray tones that convey states of grief and anguish. Our third act, “The Bonanza,” is shot with warm golds and yellows—signifiers of actual gold, an element that alludes to power and wealth. To accentuate the presence of blood in the film’s fourth act, “The War,” which is driven by the theme of vengeance, we enhanced our use of the color red by adding strong contrasts with lighting and pronounced shadows. Birds of Passage’s final act, “The Limbo,” winds down the film’s chain of events with the use of colors that are cooler within the chromatic spectrum, signaling a kind of fading of the characters’ souls.

To ensure that our on-screen action establishes a strong rhythm of its own, we decided to be extremely sparing in our use of camera movement. Birds of Passage was mostly shot using natural light, to remain faithful to the rich, unfiltered sources provided by our locations. Artificial light sources were used only during night sequences, if and when we needed to add density to an image. Initially, Ciro and Cristina wanted to shoot the movie in digital high-definition. During development, however, they realized that 35mm would be a better match, bringing the story closer to a 1960s, ’70s, and early ’80s feel. This approach brought us closer to the visual referents we found in gangster movies, and further grounded the film’s historical context.

All of our cinematographic elements helped us understand that Birds of Passage is more than a gangster movie—it’s a story in which humanity is compromised when people betray their own traditions. That underlying message presents a dark ending to an otherwise colorful culture.

Flash Forward: Jorge Lendeborg Jr. is Building a Promising Career With Good Instincts and His Family’s Steadfast Support
Indie Law: How to Secure and Hold the Rights to Your Project