A Bird in the Hand: The Journey of Birdboy: The Forgotten Children From Personal Graphic Novel to Hand-Drawn Feature

Adorably macabre and philosophically stimulating, Alberto Vazquez and Pedro Rivero’s Birdboy: The Forgotten Children (known in Spanish as Psiconautas, los niños olvidados) exists in an artistic realm far away from what most animated features dare to portray. It’s an extraordinary reminder that ingenuity and risk-taking are still alive in a medium often solely exploited for its marketability.

Described by its creators as “a dark realist fable,” this Spanish hand-drawn marvel, which won a Goya Award is finally ready to unleash its ghastly magic on American audiences by independent animation’s biggest ally in the country: GKIDS.

Two years ago, as the finished film pushed its way into the international festival scene, I had the privilege of seeing it for the first time, and was instantly infatuated by the sheer boldness of its graphic aesthetic and the perceptive quality of its ideas. Being so absolutely distinct has created both interest and resistance for Birdboy along the way, and as the directors noted at the inaugural Animation Is Film Festival, the pilgrimage from under-the-radar festival favorite to current Oscar contender has been extensive.

Concentrated vices torment a post-apocalyptic island in which a myriad of anthropomorphic animals are either scraping by or desperately searching for a way out. It’s in this inherently harsh setting that Vazquez and Rivero further develop the characters and complications that were part of the material’s two previous iterations. First as Vazquez’s own graphic novel and then as a short film director by him and Rivero, “Birdboy” (2012), that helped them move forward towards the bigger goal. “We decided to make a short film that served as a test. We were very lucky because the short turned out great and allowed us to convince the necessary producers to finance the feature,” says Rivero. “The short works as a prequel to the feature-length work,” adds Vazquez. 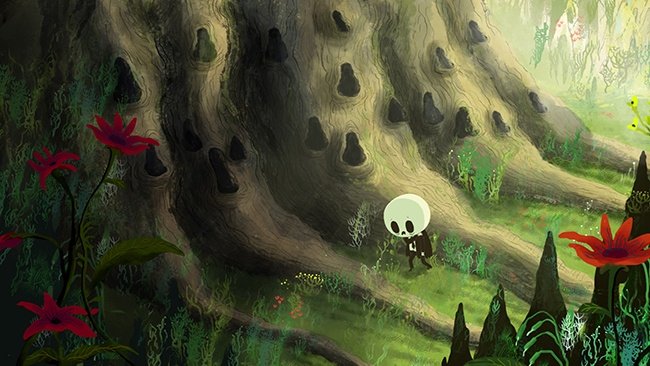 But before they joined forces, a young Vazquez, without previous experience in the format, employed his drawing abilities and acerbic wit to birth Psiconautas, the graphic novel that’s at the root of it all. “I started working on the graphic novel when I was 22-year-old, and I finished it when I was 23. I had never done a comic book before. How do you learn to do things? Doing them. Nobody teaches you to create a comic book. You make those things the best you can.” From that self-assured foundational approach, his technique evolved into a personal brand that embraces its flaws.

“The positive part is that if you delve into your limitations you eventually end up creating your own style. If instead of fighting against those limitations you pull in their favor, you obtain something of your own. The story is a mix of many things, things that have really happened, things you’ve heard, things based on friends, and things that you invent. At the end you make an amalgamation of all these things, and you have Birdboy,” Vazquez candidly explains.

The world of Birdboy was influenced by Vazquez’s recollections of the heroin crisis in Galicia, Spain during the 1980s. He recalls going to the park and finding syringes scattered around or being robbed by roaming users as a kid. “There was a lot decadence in those years. It was a much more industrial time, a bit like the movie.” The forgotten children in the film’s title mirror the lost generation of Spanish youth stripped of their lives and futures by addiction.

Wearing a suit and tie, the diabolically cute eponymous protagonist is a drug-addicted bird whose empty eyes carry the weight of his ravaged world. Birdboy is torn between his heartfelt desire to do good and the physical manifestation of his internal demons. He is a silent character whose moral compass comes from his father’s teachings, and though he wishes to uphold them, those around him focused on his most frightful facet. Vazquez admits the troubled anti-hero comes from an intimate place molded through his imagination.

“He is based on a friend of mine. But that’s just a starting point. Evidently my friend doesn’t have wings and doesn’t fly, well, he flies in other ways. It’s about transforming those references. A character that flies because of drugs in the story becomes a bird. It’s a character that doesn’t speak, that doesn’t show his feelings, and his eyes are empty, all of these are little metaphors that construct the character.” Regarding Birdboy’s professional attire he added, “It’s about creating contrast, if the character is a drug addict then he should wear a suit and a tie. It’s the contrary of what you’d expect.”

Populated by an ensemble cast of unforgettable creatures, the irreverent fantasy also peers into the lives of Dinki, a young female mouse who detests her family but is affectionate with Birdboy; Sandra, a determined bunny with a conflicted conscience; Zorrito, a little fox that’s too naïve for his own good; an underground rat society with an archaic justice system; and Señor Reloggio, Dinki’s sentient and highly memorable alarm clock.

Produced entirely in Spain by a team of 15 people over a year and half, Bidboy: The Forgotten Children is independent cinema in a state of pure fearlessness. Gruesome violence is present, but always with a narrative purpose, as is the case with the other subjects that some may consider confrontational. “I work in a completely free manner. I think about the spectator on a narrative level so that what you want to tell is understandable and has a good rhythm. That’s how I think about them, but I don’t censor myself. I don’t say, ‘This is a very dark and difficult subject’ or ‘This is too luminous.’ You have to do what you want to do creatively and forget about fears,” asserts Vazquez.

Rivero, who remembers the first feature he worked on as an unpleasant endeavor, has actually already tried his luck in multimillion productions and wasn’t enticed by the absence of autonomy in that arena. “I worked in the studio system as a screenwriter many years ago, and I left terrified, because productions are extremely marketed for many different circumstances. There is a moment when you don’t feel okay because you are contributing to a work in which you have no control and that you don’t know how it’s going to turn out. If financial compensation was very high, maybe you could think, ‘Well, maybe I’ll do this for a while,’ but sometimes is not that high,” states Rivero.