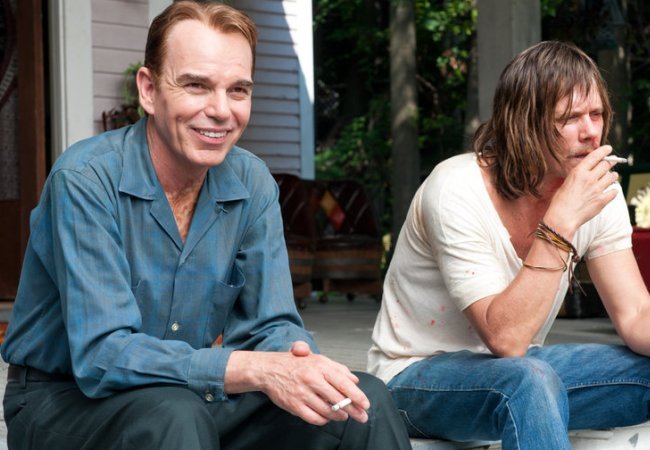 Billy Bob Thornton is a man who has lived many lives throughout his long, consistently intriguing career.

The star of A Simple Plan, Monster’s Ball, The Man Who Wasn’t There and Bad Santa, Thornton has won an Academy Award for Best Adapted Screenplay (on 1996’s Sling Blade), released four albums with his blues band Tres Hombres, and boasts impressive, though sporadic, directing credits. His latest is this week’s Anchor Bay Films release Jayne Mansfield’s Car, set in 1969 Alabama and featuring such legendary names as Robert Duvall and Tippi Hedren. We can’t imagine there’s any actor who’d turn down the chance to work with Thornton – if only, at the very least, to hear some of the stories he must have to tell. MovieMaker was lucky enough to spend some time with Billy this week and hear about his famous friends, the great Southern novelists, rabbits and water buffaloes, and being in “dinosaur land.” – MM Editors. (As told to Timothy Rhys.)

1. Don’t do the popular thing. Don’t be derivative. Do what you’re strongest at. Do what’s in your core.

2. Know your history. For a lot of young filmmakers, they only know what goes back a few years. Know the foundation of the world you’re working in.

3. No matter how old you get, how many movies you do, never stop being a fan. Because that’s what excites you. It’s what drives you.

4. Read the great novelists. When I was growing up I read the great southern novelists— Faulkner, Caldwell, O’Connor. Also Steinbeck and Dickens. They really inspired me, man.

5. Independent film has a singular vision, a real point of view. That’s what I like about it.

6. Don’t bitch and moan that you don’t have the money to make your movie. If you’re going to make an independent film now, you have to look at yourself as a new filmmaker and do what’s necessary. Things have changed, so that goes for all of us. I just look at it like I looked at it when I made Sling Blade.

7. Work with people you love. This movie I just did (Jayne Mansfield’s Car) we were in Georgia in the summer and it was hot and we didn’t particularly have enough time. It was hard, but my family was there, and I was able to work with people I love, like John Hurt, Robert Duvall, Ron White, Robert Patrick, Kevin Bacon. That was key.

8. You have to be willing to walk away. If they say “We understand that you’re making a rabbit but we really wanted a water buffalo,” just walk. But you have to mean it. If you tell somebody to kiss your ass, don’t do it as a bluff because you might get your heart broken.

9. Don’t take what you do for granted. It’s a privilege to make movies. From “Action” the first day to the last take on the last day, between those two bookends, it’s an amazing and beautiful experience.

10. Stay grounded. I don’t do the red carpet thing that much, I don’t party much. I’m not part of that society. I have an eight-year-old daughter and when I’m home I’m in dinosaur land. That makes it a lot easier.

11. The most essential thing is having life experience. If you don’t, you’ll have nothing to write about, nothing to say. Experience life and you’ll discover the stories you want to tell. An eclectic life experience is the most valuable thing you can have as a filmmaker.

12. Don’t do it for the money. That’s not to say I don’t appreciate the money. I never in a billion years thought I’d make the kind of money I’ve made in this business. But you need to have a balance. Make a living but do what you love and the money will come.

13. Make movies that you’d want to see. My business IQ is probably about a 22, but that’s okay because I make these movies for the people who do want to see them. And I hope they get the chance to see them in the theater, too.

15. Maintain the wonder of a child. And dream. I wasn’t a good student, I always had my head in the clouds, but I’ve always had dreams. And I still do. When you stop dreaming, that’s when you die. MM