Between SXSW, AFF, ATX and a slew of other acronyms (for the uninitiated, that’s South by Southwest, Austin Film Festival and, uh… ATX Television Festival), there’s no shortage of reasons to come to Austin on the festival circuit. The city itself is why you want to stay. The live music capital of the world, Austin hosts the famous Austin City Limits music fest every year. Add to that great bookstores, beer bars and (of course) barbeque, and it makes sense why the love gushes forth.

While Texas’s tax incentive budget took a bit of a hit recently, Austin’s vast support system, in the form of a strong cinema culture and an abundance of resources, hasn’t gone anywhere. The famous community spirit is alive and well in film organizations such as Austin Film Meet, Austin. Women. Film, and Dames in Film, not to mention the granddaddy of it all, Richard Linklater’s Austin Film Society, which hands out—amongst much other support—a yearly moviemaker grant.

Brandon Reich, a camera operator, editor and director of the short film “Prophecy of the Quill,” loves Austin’s “small-town vibe. Many small businesses are willing to let you use their establishment for little or no cost. That’s huge for indie moviemakers and their production value.” Reich, who works as an afterschool film teacher at Austin Film Society, points to a tapped-in feeling through the city: “Artists care about telling stories that are reflective of our time and the people here.”

A unicycle football scene Louisiana Kreutz’s romantic comedy Quaker Oaths, which both shot and had its world premiere in Austin. Photograph by E.J. Enriquez

Brian Gannon, director of the Austin Film Commission, adds that “the community is open, with filmmakers trading duties on each other’s works to make sure everyone can get their project off the ground.” Gannon cites indie video stores like Vulcan and I Luv Video for continuing to inspire and connect cinephiles around the city—as does the Austin-headquartered Alamo Drafthouse theater chain.

Seeing that the approximately $175 million-budgeted Alita: Battle Angel, produced by James Cameron and Jon Landau, and directed by Robert Rodriguez, came to town in 2016, you might assume that that production cornered the 22.5 percent cash grant offered. Yet the city found room for a number of indie projects, such as Louisiana Kreutz’s feature Quaker Oaths, and a bunch of movies involving Master of None star and native Texan Noël Wells: F*cking People, directed by Theresa Bennett, Infinity Baby by Bob Byington and Mr. Roosevelt, which Wells wrote and directed herself.

“Ego and negative competition feel far less present in Toronto,” says moviemaker Gavin Michael Booth (The Scarehouse). “Everyone who’s moved here to pursue filmmaking wants to collaborate and understands that working together is going to help everyone, themselves included.”

Perhaps, then, if you’re looking to set up your own studio in Canada, Toronto is the place to be. Famously multicultural, it’s also clean and safe, with a foodie culture rarely rivaled. Like Vancouver, Toronto doubles as New York in so many movies that you’ll feel like you’re living in the Big Apple in many of its 140-plus neighborhoods.

Downsides? It gets cold in the winter, and the public transit system leaves much to be desired in the face of this level of urban sprawl. Even so, the city was a hub for moviemaking in 2016, boasting productions like Suicide Squad, Downsizing (starring Kristen Wiig and Matt Damon), Guillermo del Toro’s The Shape of Water, and TV series like Orphan Black and the upcoming Star Trek: Discovery. Besides del Toro, who settled in the city years ago, Toronto is home to directors Ivan Reitman, Sarah Polley and David Cronenberg—pretty decent company.

Top among the dozens of festivals here is the affair that the city is synonymous with in the biz: Toronto International Film Festival, 42 years old and going strong. Also noteworthy is Hot Docs, the largest documentary film festival in North America. Head to one of the nearly 2 million square feet of sound stages at your disposal, including Pinewood Toronto Studios (with its 46,000-square-foot Mega Stage), the six retrofitted stages at Cinespace, Revival 629, TRiBRO Studios and Showline Studios. Toronto is sure to provide the resources and support you need for years of moviemaking to come—eh?

“The versatility of the landscape, the endless textured locations, the gorgeous light—you can shoot year-round and save a lot of money,” says Hannah Macpherson, creator of the AwesomenessTV series [email protected] and the 2016 feature Sickhouse, of Albuquerque.

Chris Boone, writer/director of the feature Cents, says, “Albuquerque is well-known for its crew base and studios, but filmmakers outside of the city are unaware of how strong our [acting] talent is. Albuquerque-based actors continue to appear in key roles in Hollywood studio films, Sundance breakouts and critically acclaimed television series every year.”

This talent pool is fed by New Mexico’s Film Crew Advancement Program, training crew on the job and encouraging their advancement. Indeed, moviemakers can count on strong and compassionate official support: The film office was a finalist for the Location Managers Guild International’s Best Film Commission honor in 2016. 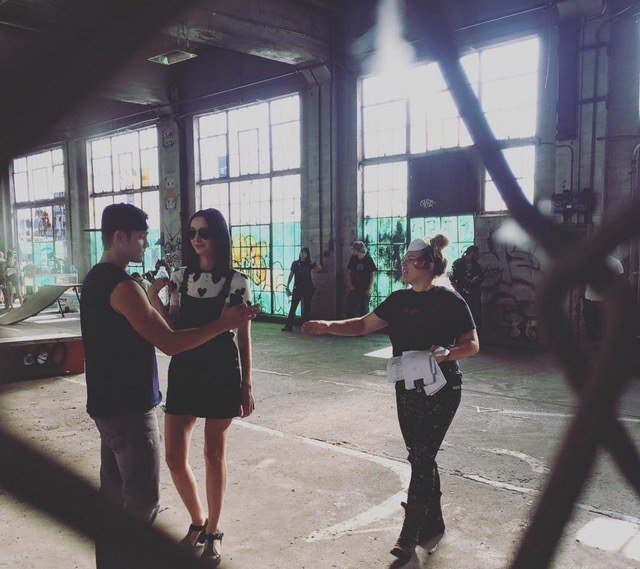 Hannah Macpherson’s [email protected] shot its second season in summer 2016, at locations such as this old repair shop for steam engine locomotives in downtown Albuquerque

An exciting new addition to the scene was the inaugural Indigenous ComicCon in 2016, featuring indigenous creators of all art forms. That event adds more diversity to a lineup that already includes the Pueblo Film Fest, the New Mexico Italian Film & Culture Festival and the Southwest Gay & Lesbian Film Festival. The Albuquerque Film and Music Experience counts Robert Redford on its board. And nontraditional festival Movies and Meaning aims for a less violent world through storytelling.

In sum: “There are definitely careers to be had in New Mexico,” says Macpherson. “As long as you can still get to L.A. when you need to—which is less than a two-hour flight.”

You can take Affleck and Damon out of Boston, but can you ever take Boston out of Affleck and Damon? The Beantown natives’ love doesn’t stop when they drop anchor elsewhere—they continue repping Massachusetts in recent projects, like Affleck’s directorial venture Live by Night, set in Prohibition-era Boston, and Manchester by the Sea, shot throughout the state and produced, in part, by Damon.

With its celebrated museums and cultural institutions, historic sites, university culture, delectable seafood and infectious accent, the city of Boston has much to recommend it. The city is walkable, with fast and efficient public transit, so as fun as it is to say, there’s no need to “pahk the cah in Hahvahd Yahd.” In fact, “within a 15-mile radius, you can shoot a modern city, suburbs, farms, woods, ocean, rivers, lakes, historic buildings and sites, and buildings of all types ranging in age from one to 400 years old,” says Ed Gaffney, screenwriter for the 2016 thriller Russian Doll. “As a storyteller, that’s a huge amount of flexibility.”

Massachusetts offers a robust 25 percent tax credit with a $50,000 minimum spend and no annual or per production cap. 2016 saw a couple of titles about the 2013 Boston Marathon bombing: Peter Berg’s Patriot’s Day and David Gordon Green’s Stronger, as well as Mike White’s Brad’s Status, Netflix’s Wheelman, Bridgewater starring Jason Clarke and Super Troopers 2. With art-house venues like the Brattle Theatre in Cambridge, Coolidge Corner Theatre in Brookline and the Somerville Theatre in Somerville, there’s no shortage of viewing opportunities nearby. Come for the clam chowdah, stay for the long haul. Boston is sure to do big things at the movies in 2017.

2016 was a big year for Memphis. The city was home to Oscar-nominated Roland Joffé’s Sun Records series—a title that receives a $4.3 million cash refund on its $17 million in-state spend. In fact, the local commission’s film and TV clients generated a direct spend of $8,523,345 in 2016—a record-breaking figure and approximately eight times 2015’s direct spend.

The reason? “Memphis has become a hotbed for faith-based, independent, music-themed and African American-oriented films,” says Linn Sitler, commissioner of Memphis and Shelby County. “It is also now a magnet for reality-based television and network episodic TV.”

Speaking of record-breaking, the Indie Memphis Film Festival welcomed more attendees than ever last November: more than 11,000. In other festival news, a nice addition to Memphis’ scene was the WLOK Black Film Festival, sponsored by WLOK AM Radio and hosted by the Brooks Museum of Art—a platform to showcase movies that blend music, cinema and art, with a focus on black culture.

Not enough change for you? Well, the ever-diligent Film/TV Commission introduced a revamped online production directory in winter 2016, powered by Reel-Crew, to make hiring easier. And, to top it all off, the Harahan Bridge Big River Crossing—the longest public pedestrian bridge across the Mississippi—opened in fall, allowing pedestrians and cyclists to cross the river to West Memphis, Arkansas. You get all of this in one of the consistently cheapest cities in America—proving that you need not sacrifice culture and vibrancy when living on a budget.