Robert Pattinson says his Batman, who we see pounding his way through Gotham in the brand-new trailer for The Batman, is having a bit of an identity crisis.

“The delineation between when he’s Batman and when he’s Bruce is not so clear,” Pattinson said before the unveiling of the trailer at DC FanDome on Saturday. “In other iterations… he really knows what he’s doing when he’s putting on the cowl. I kind of really like this idea that he’s a little bit out of control. He hasn’t completely defined what Batman is. He gets lost in it. … He’s not sleeping, and he’s becoming this quite sort of odd creature.”

Pattinson’s Batman is shown fighting quite a few people in The Batman trailer: a gang dressed like clowns, The Penguin (an unrecognizable Colin Farrell), and a masked serial killer livestreaming a message to a crowd of Gothamites on the local news. He catches bullets on his chest-plate, appears to tase a member of the clown gang, and speeds his Batmobile through flames and carnage.

Zoë Kravitz as Selina Kyle, aka Catwoman, in The Batman, courtesy of Warner Bros.

What is The Batman about? Who knows? He seems to be locked in a game of cat-and-bat-and-mouse with Paul Dano’s version of The Riddler. Selina Kyle (Zoë Kravitz), aka Catwoman, may be an enemy, love interest, or both. The ominous, effective music (including a moody use of Nirvana’s “Something in the Way,” which also played in a trailer released last year) suggests an unusually gloomy Bat-story. The plot hints suggest a complex mystery.

Director Matt Reeves said in the introduction to the Batman trailer that the film would be an especially grounded Batman story, set early in his crimefighting career. He likened Bruce Wayne to a reclusive rock star. Pattinson said the film will feature the young Caped Crusader in a state of desperation.

If nothing else, the first extended look at Robert Pattinson as Batman should assure fans who wondered if the Twilight star could be sufficiently dark and intimidating as the Dark Knight. (Yes!) And it gives us all plenty to watch, frame-by-frame, as we grasp at hints about what will happen in the film, which is due in March 2022.

Batman (Robert Pattinson) surveys the skyline in the Matt Reeves film The Batman, from Warner Bros.

Among the things likely to spur discussion:

—Who is that masked serial killer, speaking via livestream? Is that Dano’s Riddler? Or someone else?

—At the 1:15 mark, who is that standing at the center of the floor, above a question mark, with lines pointing to the phrases “No More Lies” and “Colson” and “Mitchell” and “Savage” and “Renewal is a Lie” and, most interestingly, “The Sins of My Father??” (The question mark is a Riddler trademark. But Bruce Wayne is haunted by memories of his father, Thomas Wayne, whose murder, along with that of his mother, Martha Wayne, spurred him to don the cape and cowl. And Colson and Mitchell happen to be the names of key figures in the real-life Watergate scandal, whatever that means, if anything: Both Charles Colson and John Mitchell did prison time for breaking the law in their defense of President Nixon.) 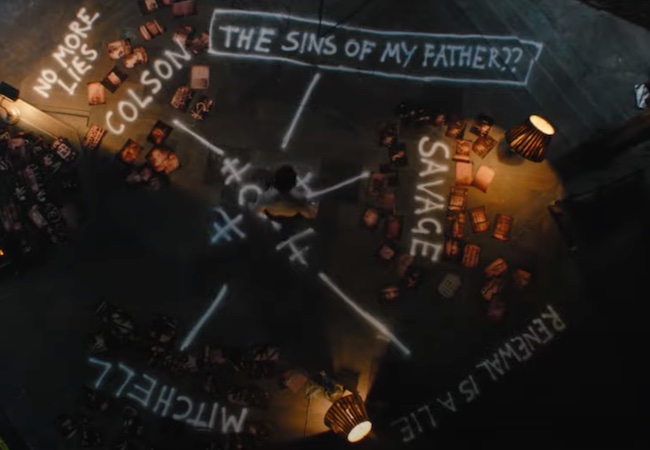 We have no idea what’s happening in the above scene in The Batman, but think it’s funny and weird that the names “Colson” and “Mitchell” are the names of Nixon loyalists locked up in the Watergate scandal.

DC Fandome also fueled hype for a slew of other DC Comics-related projects, including two other Warner Bros. films due next year: Black Adam, starring Dwayne Johnson as the DC supervillain, and The Flash, starring Ezra Miller as a superpower speedster who can jump across realities. The teaser trailer shows The Flash, aka Barry Allen, arriving in the universe inhabited by the Michael Keaton Batman of the Tim Burton films.

Here is The Flash trailer. The film, directed by Andy Muschietti, is scheduled for a Nov. 4, 2022 release.

He is ruthless.
He is unstoppable.
He is the reason the hierarchy of power in the DC UNIVERSE is about to change.

Here is the Black Adam trailer:

The Batman, directed by Matt Reeves, arrives in theaters on March 4, 2022, from Warner Bros.

Main image: Robert Pattinson as Batman in The Batman.