Scene Stealer: Barry Keoghan on Learning from Yorgos Lanthimos in The Killing of a Sacred Deer 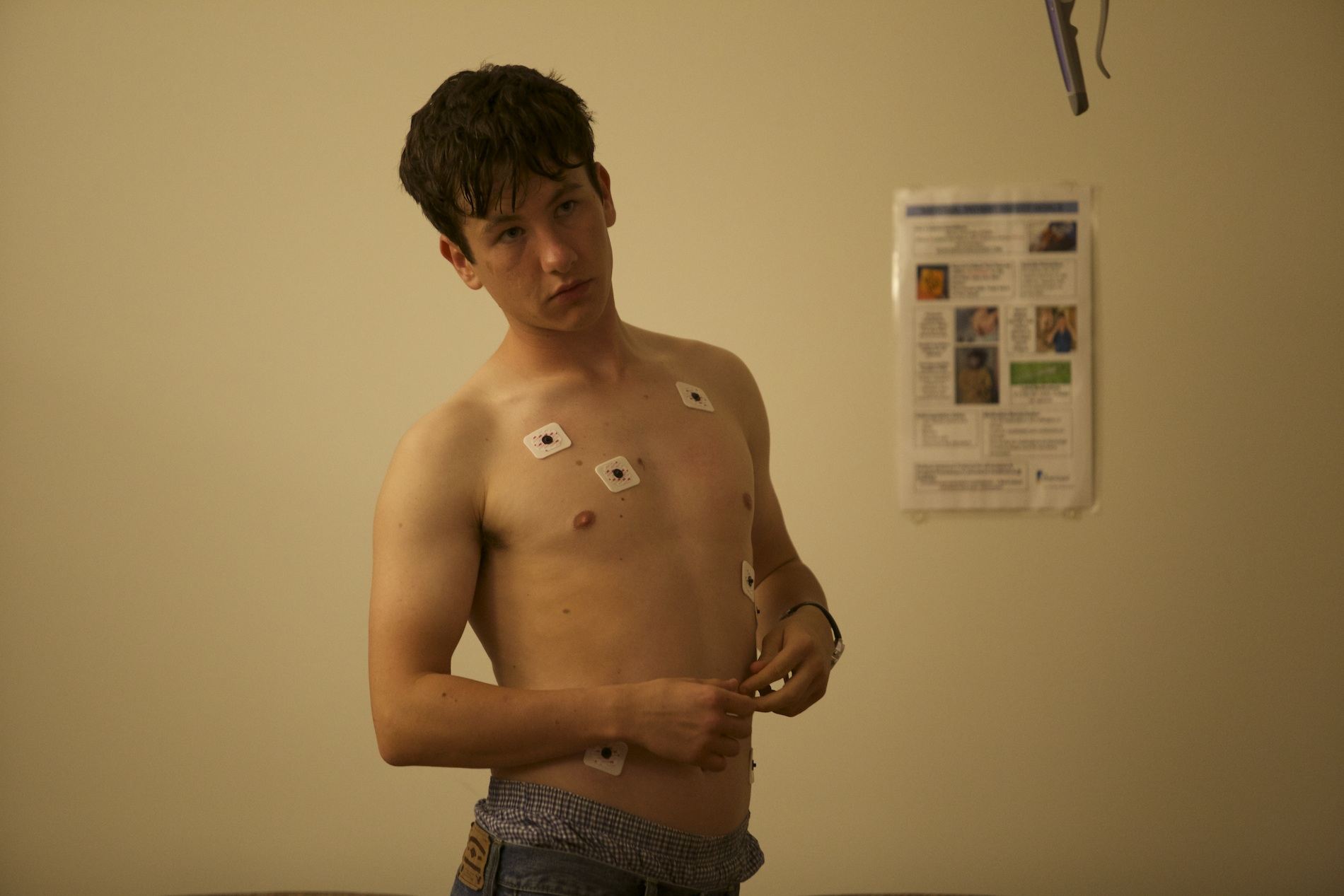 A quaint demeanor conceals his raging and unwavering yearning for retribution. His twisted take on the “an eye for an eye” concept of vengeance in Yorgos Lanthimos’ The Killing of a Sacred Deer allows young Irish actor Barry Keoghan as Martin to tap into an unsettling mindset.

Measured and polite even as the ambiguous plot veers towards sadistic brilliance, Keoghan is at home in Lanthimos’ uncanny universe—which grows its eccentric mythology with every film. If The Lobster was buttered with dark comedy, the humor in Sacred Deer is of a pitch-black quality. The director’s brand of offbeat storytelling is an acquired taste that satisfies the most perverse of cinematic palates.

Keoghan plays opposite Colin Farrell and Nicole Kidman, from whom he says he learned a lot just by being in their presence. As Martin, the fresh-faced thespian haunts Steven Murphy (Farrell), a surgeon and recovering alcoholic who hasn’t been held accountable for his past mistakes. When the safety of his wife and children becomes compromised, Steven is confronted with the unexplainable circumstances and the realization that Martin’s innocent appearance might be just a façade. Keoghan consistently steals the show.

In a single a year the Dublin-based actor has appeared in Lanthimos’ Cannes title, as well as Christopher Nolan’s massive war drama, Dunkirk, expanding his career well beyond local productions. Keoghan, who notes he’d like to work with the Safdie Brothers in the future, is a sharp-eyed artist able to impress award-winning directors, and perhaps become one someday. Holding a camera given to him by Yorgos Lathimos himself, Keoghan shared his newly ignited passion for below-the-line craftsmanship and the difficulty of doing an American accent with a curious rhythm.

Carlos Aguilar, MovieMaker Magazine (MM): How familiar were you with the unique brand of offbeat storytelling that characterizes Yorgos Lanthimos’ work?

Barry Keogha: I had seen The Lobster and Dogtooth. Every actor that steps into his world kind of knows you’re in for something other than your typical moviemaking, what you’re used to, which is nice. It’s experimental, and it’s unique, so I was aware of that, and I was totally up for it.

MM: What was your initial perception of Martin when you read the screenplay for The Killing of a Sacred Deer?

BK: He’s a young lad seeking revenge and a father figure and all sorts of things. He’s weird. He’s definitely weird. I wouldn’t read him and think, “Yeah, this is right.” He was definitely weird to me on the page.

MM: What’s the key to develop a character in Yorgos’ universe? There is a singular cadence in the way lines are delivered in his film, is that something you discuss with him?

BK: I think that’s just putting your own twist on it, with Yorgos’ unique language and rhythms and style of acting, which he never does ask you to perform that way, but you take it in going in. With those things, you could have any character in that world and he’d be a little bit messed up. Even Steven Murphy, who Colin plays, even Ana, who Nicole Kidman plays, everyone has a certain thing to them, this weird element, because they’re in this world. No one’s what we think of as “normal” The way characters talk is not something we really chat about. We don’t focus on that. I know it’s very unique and very put together, or constructed. As I said, you take that going in. That’s something I took from watching his previous film, learning to talk like that.

MM: There are plenty of intense moments in the film, but what was actually the most difficult one?

BK: The spaghetti scene, just because of the amount of spaghetti I had to eat. [Laughs].

MM: It seems that accents is something you do incredibly well as a performer, in this film no one would guess you are not originally from suburban American.

BK: That’s a good thing to hear! We worked hard on the accent. I have a very thick Irish accent, as you can hear. I’m softening it up right now so you can understand, but I do have a very thick Irish accent. That was definitely a no go on this movie, as the character of Martin is American. It was nice to tackle that, but again, doing an American accent in a Yorgos rhythm and tone, it’s slightly harder, because you can’t do the rhythms that Americans do normally.

Keoghan keeping his head about water in the film

MM: Although you continue to work in Ireland, both Dunkirk and The Killing of a Sacred Deer have taken your career into the international stage. Where do you go from here in terms of finding the balance between the two?

BK: I’m taking over this whole town! International is what I want to be doing, but home turf is also great. I look at the filmmakers and the scripts, whether it’s a good story or a good filmmaker or if it’s a good character. Those are my three elements. Then, if it’s international, that’s nice. I always want to tackle American and British accents. I always want to challenge myself as an actor. It’s been nice that these two, Dunkirk and The Killing of a Sacred Deer, have been international. There are a lot of home roots there, with Dunkirk being an English movie, and The Killing of a Sacred Deer being Irish Film Board-funded.

MM: As a young actor you’ve already had the opportunity to work with renowned directors like Yorgos and Christopher Nolan. How does you approach change when you know there is the added pressure of a big name?

BK: When I’m working with these people, I try to match up. I have to bring my A game. It’s not pressure or fear. It’s like, “I’m going to show you something you’ve not worked with before.” They pick you because of a certain skill or certain thing they see in you, but they never tell you what that is, so you’re constantly trying things. You should be on your A game with every director, I’m not saying that just when you’re with a top end director that you should step up. I love working with big directors and first time filmmakers, either or, I’m always looking to improve my next role. I’m looking to improve physically, or break my bad habits on screen, or totally go opposite to what I’ve done.

MM: Besides your work as an actor, have you ever considered trying your hand at moviemaking from behind the camera? If so, what have you learned from the directors you’ve worked with.

BK: I have! Yorgos got me this camera. It’s incredible, I’ve been snapping away on this, Nikon FM2. I mean, I’m getting to work with Christopher Nolan and Yorgos Lanthimos, and they’re two top directors. If you were to name 10 working today, they’d be up there. I’m getting to work with them, and I’m learning by watching them, learning new techniques and the slang. I’m being educated when I’m not even aware of it. I’m noticing shots in movies, and I’m asking questions. I’m always hanging out with the DPs. I’m very interested in those sides of things, and I respect it much more now as well, now that I get to see and work with these filmmakers. I get to see the work that they put into the end product.

MM: Interestingly enough, these two directors like to work on film, rather than digital.

BK: Yes, these two films were. Sacred Deer was shot on film and Dunkirk was also film. We’re trying to get a third one on film to make it a trilogy, whatever that happens to be. MM

The Killing of a Sacred Deer was released October 20, courtesy of A24.

Marsha Hunt at 100: The Actress Recalls the Blacklist, Film Noir and Being Cast in Gone With The Wind
Rebel on the Rise: Daniela Vega Is A Fantastic Woman Inside and Out