Away From it All in Taos: Lose Yourself, in the Best Way, at Taos Shortz Film Fest 2016

But the high desert town—famous for its off-the-grid aspirations and mystical leanings—welcomes moviemakers from all around the world every April to congregate and present work on the big screen. The 2016 edition of Taos Shortz Film Fest celebrated 170 short films from 33 countries, and stepped up its game with a state-of-the-art upgrade of its theater’s projection and sound systems—all organized by a Taos community that, actually, seemed quite interested in dealing with the world. 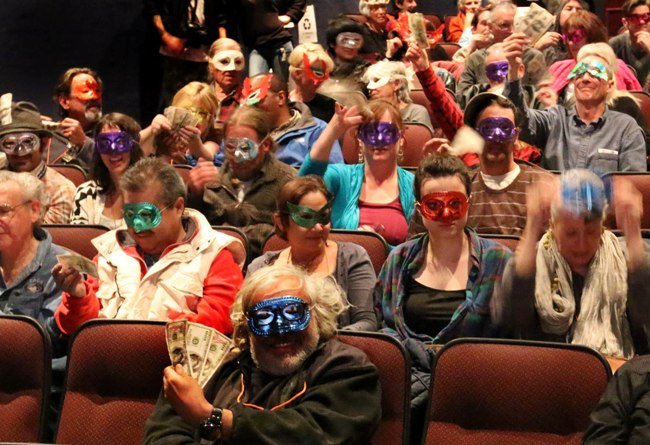 At the Taoseño Masquerade event “Far Away from Everyday,” TSFF handed out $100 bills to the audience (movie money, that is). Photograph by Anne-Sopeie Lenoir

The festival boasts around 30 hours of short films from every corner of the globe (this year a special program was dedicated to Persian shorts), but there’s also a deep commitment to New Mexican cinema. This was clear from day one, when casting auditions were organized in the lobby of the Taos Community Auditorium, with the goal of recruiting interesting New Mexican faces into the industry as paid production extras. There is also a specific program dedicated to short films by Taoseños (read: denizens of Taos), and a series featuring shorts made in New Mexico. Add to that a drones workshop in Kit Carson Park and a lot of networking events, and the fest turned Taos into a five-day cinematic working retreat for artists and professionals.

TSFF’s founders, Anna Cosentine and Duprelon “Tizzz” Tizdale, have fostered an atmosphere where Southwestern U.S. and Taoseño creative communities can view one another’s work, share ideas and talk production strategies with filmmakers from around the globe. The Native American community, not forgotten as the original inhabitants of Taos—and an ever-growing cinematic force in the world—also plays a prominent role at the festival, with a program curated by the American Indian Institute of Art in Santa Fe. This event gave young filmmakers the opportunity to present and discuss their work, then mix it up with the likes of award-winning Russian, Australian, Brit, German, Canadian and U.S. directors and actors.

Each evening, after 12 hours of skillfully curated programs, there are the mixers. One night at the Taos Mesa Brewery—a huge hanger-like structure rising like a mirage out of the sagebrush just outside town—filmmakers and audience members swigged beer, stood around a bonfire and kept a respectful distance from a machine, part forklift, part flame-thrower, called The Subjugator. As movie plots were discussed, The Subjugator artistically ripped to shreds and incinerated a prefab wooden structure, and the intense heat of the performance art warmed the crowd in the cold desert night.

Taos, situated beneath the towering Sangre de Cristo Mountains and cut off just to the west by a deep gorge carved by the Rio Grande, has been a spiritual and cultural center for many centuries. Some locals even believe that extraterrestrials have landed nearby. It’s not really a place that you’d just be passing through, but early April is a good time to plan a trip. You can hang out in town during the festival and see some of the world’s top short films. And then, if you find you’re not yet ready to deal with the world again, you can disappear into the desert for a while. Maybe for good. You wouldn’t be the first. MM