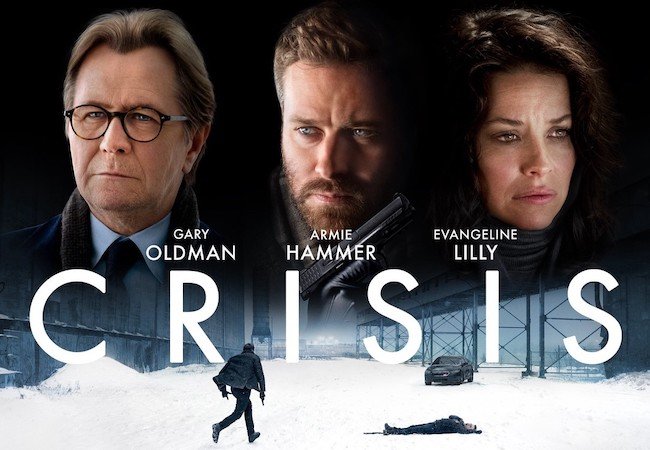 Nicholas Jarecki says he had been getting lots of good news about his latest film, Crisis, when he received a text from a friend in January: “Why is Armie trending on Twitter?”
“And I’m like, I don’t even really know what ‘trending on Twitter’ means. Like, I guess I’m an Instagram guy,” Jarecki says on the latest Bret Easton Ellis Podcast.
Armie Hammer is one of the leads on Crisis, with Gary Oldman and Evangeline Lilly. Within hours, stories about purported DMs and a cannibalism fetish threatened to overshadow Jarecki’s earnest, serious-minded film about the opioid crisis. Hammer has strongly denied accusations of assault and abuse, and has not commented on the veracity of the DMs. (The accusations against him are detailed below.)
Jarecki, who made Crisis well before the accusations came to light, says on the podcast that the Hammer stories led to cancelled press coverage and negative reviews that had nothing to do with the quality of the film.
“It was a sort of slow-motion reaction,” Jarecki says. “We had all this stuff lined up. … Little by little all these things evaporated and all this press — they didn’t want to do a feature about Armie Hammer because let’s be honest, the story was Armie Hammer, cannibal. But the subtext of the story was Armie Hammer, sexual abuser. And now the further subtext, which now has become the text, is Armie Hammer, accused rapist.”
Also Read: Bret Easton Ellis Serializes New Novel The Shards — on His Podcast
And yet Crisis still survived, he says, to win over audiences and climb to the top of the iTunes store.
Crisis faced all the same problems as most movies scheduled for 2020 — a pandemic-delayed release, questions about how to get it into theaters — but those seemed to be resolved by January. And then Hammer began trending.
Suddenly, even media appearances for actors who didn’t appear on screen with Hammer began to fall apart, Jarecki said. The director said one network was eager to have Oldman appear for an interview, but insisted, “he’s got to answer two questions about the Armie Hammer” situation.
“I think the only time they ever met each other was at a dinner I had to kick off the movie,” Jarecki says on the podcast.
The film was released on Feb. 26, with the Hammer story in full swing. There was some discussion of a delay, he said, but financial considerations came into play: “We’ve got to pay back the bank.”
Jarecki worried the Hammer situation would affect reviews for the film, but everyone assured him that wouldn’t happen.
Unfortunately, he said, it did.
“I did real tests with hundreds of people. And I knew audiences like the picture. And so, you know, the first few reviews came in and they were positive — Variety, Deadline. But then I started seeing all this wave of like, a trend — hatred, bile” because of Hammer, Jarecki says.
No one ignored the Hammer factor. The Boston Globe‘s review of Crisis, for example, advises readers: “you’re forgiven for thinking the title refers to the actor’s career.”
In his talk with Ellis, Jarecki doesn’t get into the financial specifics of Crisis, which has earned just under $1 million in theaters, according to Box Office Mojo. That doesn’t include all of its sales to Apple customers, at a price of $6.99.
Jarecki also doesn’t get into the specifics of the accusations against Hammer, given that he says his relationship with the actor was strictly professional. (Jarecki describes Hammer as a pleasant and hard-working collaborator, and adds that he “is not bad in the movie.”)
Also Read: An American Psycho Oral History, 20 Years After Its Divisive Debut
Jarecki has been on both sides of reviews. His 2012 Richard Gere financial thriller, Arbitage, was praised for tight plotting, very watchable performances and its confident handling of Wall Street corruption. It holds an 87 percent on Rotten Tomatoes.
Crisis has a 56 percent, but a 71 percent with audiences. Jarecki says he’s fine with negative ones, as long as they engage with the film, and not the circus around it.
“I was just like, this is crazy. You know, this is truly insane. Because if you wanted to come in here and say I’m a cloying manipulator who attempted to climb the prestige ladder by using the opioid crisis, okay, come at me with that attack. It’s not true, but I’ll defend myself for whatever you think my sins are.”
“But to come with the Armie of it all was really very frustrating because he’s only in a small portion of it anyway,” Jarecki says. “He’s in 40 minutes of a 120-minute movie.” 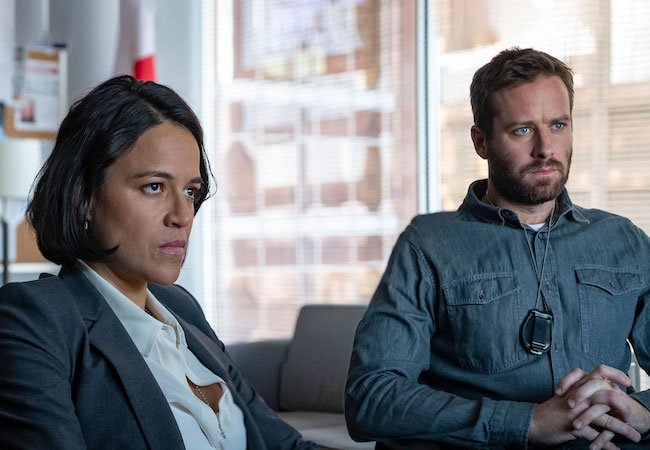 Jarecki’s openness on the podcast seems to come in part from his friendliness with Ellis. They collaborated on the 2008 adaptation of Ellis’ short story collection The Informers, though neither is pleased with the final product.

The Hammer news first broke when an Instagram account called House of Effie, which has since been made private, shared screenshots of conversations in which someone — purportedly Hammer — described fantasies about violent sexual acts including drinking blood and cannibalism.

One of Hammer’s exes, Courtney Vucekovich, later told Page Six that Hammer had been emotionally abusive, and once told her he wanted to “break my rib and barbecue and eat it.”

On March 18, The Los Angeles Times and other outlets reported that the LAPD was investigating a sexual assault accusation made by a woman identified as Effie.

Effie, a 24-year-old, said at a news conference with her attorney, Gloria Allred, that she met Hammer on Facebook in 2016 when she was 20 years old. She has not disclosed her full name, and Allred would not comment on whether her client was behind the House of Effie social media account.

Effie said in the news conference that she “fell in love with him instantly,” and that “the emotions from both sides became really intense.” She said that in retrospect she believed he had manipulated her, and that he soon began crossing boundaries, abusing her “mentally, emotionally and sexually.”

“On April 24, 2017, Armie Hammer violently raped me for over four hours in Los Angeles, during which he repeatedly slapped my head against a wall, bruising my face. He also committed other acts of violence against me to which I did not consent,” she said tearfully.
Hammer’s attorney, Andrew Brettler, said in a statement in response: “Effie’s own correspondence with Mr. Hammer undermines and refutes her outrageous allegations. As recently as July 18, 2020, [she] sent graphic texts to Mr. Hammer telling him what she wanted him to do to her. Mr. Hammer responded making it clear that he did not want to maintain that type of relationship with her.”
Since the first accusations, Hammer has left multiple projects, including the Jennifer Lopez film Shotgun Wedding, and The Offer, which is an upcoming TV show about the making of The Godfather.
You can subscribe to the Bret Easton Ellis Podcast here.

Who Is Richard Abath, Security Guard During Isabella Stewart Gardner Museum Heist?
This Is a Robbery: What to Know About Self-Professed Art Thief Myles Connor Jr.