Production Design Case Studies: Arad Sawat on Designing Norman and A Tale of Love and Darkness 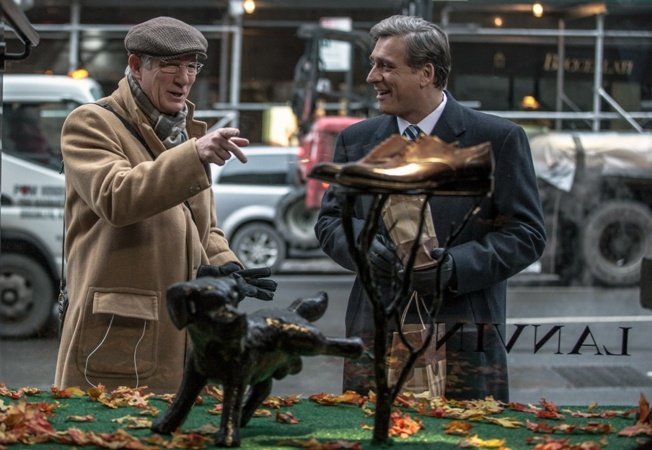 Production design is not about building a real place. It’s about designing and building an idea, a unique point of view, using set building, styling, visual effects and other tools.

Production design builds the physical reality of the story. It’s not about documenting an existing reality, but finding a look that supports the story told in the script. My work as a designer is to study the world in which the narrative takes place, and build the environment where the director will being the story to life. A successful relationship between designer and director is a constant, ongoing cooperation inside intense creative work, from conception to wrap.

I use the word “dialogue” a lot when talking about production design. The director and I talk thoroughly about the tone, color, the space where the story takes place, the way the characters move and act in that space, and every other visual component we can think of. I like to get the cinematographer involved in this creative stage, as well. My dialogue with the cinematographer is usually very architectural; it centers on composition and light sources, which can enrich the space and gives it aesthetic qualities even if it’s void of detail. The relationship between characters, space and camera is an important element in production design, and so is the dialogue and cooperation between the cinematographer and myself. I consider the camera another entity, almost an extra character, which moves and works in the physical spaces I build.

The stage for the Israel Prize ceremony in Footnote (2011), designed by Arad Sawat

The first film I designed, the 2011 Oscar-nominated Footnote, was also my first collaboration with the brilliant director Joseph Cedar. Since the film tells the story about the world of Talmud researchers, the design is woven around small details, and allows the audience to examine the actions each character makes in the set’s space: from his or her method of filing documents and cataloguing the books, to the home of protagonist Eliezer Shkolnik (Shlomo Bar Aba), to the stage of the Israel Prize ceremony.

A moment in the script which stood out to me immediately: Seven characters are sitting in an office having a long conversation, during which Uriel Shkolnik (Lior Ashkenazi), Eliezer’s son, defends his father’s honor.

Joseph and I decided that the smaller the office will be, the better the scene would work. I designed a tiny office, 240 x 240 centimeters (about 8 x 8 feet), so the actors would barely have anywhere to move, but the walls were on wheels that could move according to each camera setup. Joseph then used this set while shooting the scene so that when Uriel enters, the other actors have to all move and rearrange themselves in order to create a new seating place.

The conference room set in Footnote

When Joseph asked me to design Norman: The Moderate Rise and Tragic Fall of a New York Fixer, I immediately read the script and met with him. One of the more memorable subjects we discussed was the different ways we can present the Israeli prime minister at his home. After bouncing ideas off each other, I began working on a look with simple and minimalistic architectural lines, and presented a sketch to Joseph. I had the prime minister’s living room looking out onto the garden, in front of which is a wall. The wall is, of course, there to protect the prime minister, but is also prevents him from seeing his country and its people. The idea was a house built as a fortress, and so the wall defines the house’s detachment from the public space. Joseph liked the concept and felt that it was an elegant, visual way to show the viewers how the prime minister felt and lived his life.

For me, one of the most central scenes was the meeting between titular fixer Norman Oppenheimer (Richard Gere) and Micha Eshel, the young Israeli politician who will one day become the aforementioned prime minister (played by Lior Ashkenazi), outside the Lanvin fashion boutique in New York City. The scene begins at the store’s display window, which frames both characters, and continues into the store.

Sketch for the Lanvin store scene opening in Norman: The Moderate Rise and Tragic Fall of a New York Fixer

While the exterior was shot on location outside a New York Lanvin store, I designed and built the store interior as a studio set with fixed lighting, so the actors and camera are able to move freely. My concept was that the shape and proportions of the space should be part of the store’s prestige, and affect how the viewer experiences the scene. The items inside the store are displayed like pieces of art—each piece of clothing or accessory has its own space and specific lighting.

The architecture creates a special experience as the characters (and of course, the viewers following them) walk through the set, going up the rounded corridor as the floor and ceiling converge into a V.I.P. room, located 3.5 meters (almost 11.5 feet) off the studio ground. The entire store was designed in a way that would make it seem beyond Eshel, to show the viewers that he is a man who can appreciate good taste, but could barely afford even walking into a store where a pair of shoes cost more than the average person’s monthly salary. The set for the interior of the Lanvin store in Norman

Another recent cooperation I had, with the talented Natalie Portman on her directorial debut, A Tale of Love and Darkness, was a different kind of challenge. The film was an adaptation to what might be the most canonical piece of literature on the Israeli bookshelf, making the design process very interesting. The film, as well as the book it is based on, tells the story of famous Israeli novelist Amos Oz’s boyhood, living in the shadow of his mother Fania’s mental illness, during the final days of the British mandate in Palestine and the first days of the State of Israel.

Since I was working on a literary adaptation for the first time, it was important for me to meet Oz, who wrote the autobiographical novel. We discussed in length the way he chose to describe different locations, and his memories of his childhood home. He even drew a floorplan of the house for me. I left the meeting thinking that the film’s look should be about memory and not restoration, so my main goal was to portray reality as people experienced it at the period, and not necessarily documenting it. Most of the dialogue between Natalie, Slawomir Idziak (the astute cinematographer) and me during the early stages of work, was about how we could show the constant clash between Fania’s inner world and the hard reality of the world in which she lives­­. We decided to create a sharp visual contrast between the dramatized stories Fania tells Amos, and the closed, almost claustrophobic spaces of 1948 Israel.

Color was the main tool here, as we made the environment darken as Fania’s condition worsens. The appearance of Tel Aviv in the film is a climax of darkness. The sky is dark, gloomy and overcast, as when Fania walks through a rainy night during the final part of her life. A palette of black and dark grays creates the somber atmosphere. When constructing the sets, militant and claustrophobic construction was used to accentuate the feeling of gloom and oppression present just before the war broke out.

In the movie, Jerusalem looks derelict and impoverished, a maze of narrow, stone streets, buildings covered in tin and wooden scaffolding. The real-life Syrian Orphanage—the Schneller compound—was selected for the main street. It has an interesting historical past: After initial use as an orphanage, it then served both the British and the Israeli armies consecutively as an army base. The militant and claustrophobic construction was used to accentuate the feeling of gloom and oppression present just before the war broke out. Small businesses and stores chosen to front the street—a pharmacy, post office, grocery store, glassmaker—all represent the modest daily life of the times. At night the living room turns into the parents’ bedroom when a sofa is pulled out and opens into a bed. A narrow, long corridor connects between the living room and the kitchen. The kitchen reflects its status as well as the family’s character: ascetic, grey and austere, remarkable in its exemplary arrangement against peeling walls. The house is surrounded by a small yard and fence, which includes areas of barren earth, a pomegranate tree and a scarecrow.

Whilst Jerusalem and Tel Aviv represent the realistic aspect of Fania’s life, her stories to Amos are embedded in a world of colorful and exciting fantasy. Natalie, in focusing the work on the relationship between the young Amos and his mother, created a specific need in the film: a different world, the world of Fania’s stories told to Amos. For scenes of her stories, we chose locations with wide open spaces. In one of the stories, Fania describes a woman who burned herself in a shack in her hometown of Rovno. This scene was designed with an opening pastoral effect to contrast dramatically with the ultimate shock of the fire.

The deep bond between them sways between a realistic maturity and a world of dreams. It is a story of an inevitable and unavoidable clash between fantasy and the harsh reality of life. Designing the film as a legend—but one that really happened, spiced with interludes of dream sequences as part of a continual sequence of dramatized fantasy images—is integral to the film.

Of course, we meet the budgetary reality and everything can change. Then the work of the art department begins. As a production designer, I work constantly with art directors, set decorators and graphic designers who must work in synergy in order to deliver the look I imagined with the director and cinematographer, on budget and on time. In order to make sure this is possible, I always try to keep this part of the process in mind while working on the concept. No sense in having a vision that will be too costly, time-wise or money-wise, to create properly.

This is where our imagination is truly put to the test. At this stage, meetings with the director and cinematographer are essential, as we have to come up with creative solutions, proper planning of sets and frames, and decide what we want to see and build. To me, these constraints usually lead the film to a more organic state. MM

Norman: The Moderate Rise and Tragic Fall of a New York Fixer opens in theaters April 14, 2017, courtesy of Sony Pictures Classics. Beyond the films mentioned here, Arad Sawat has been production designer for films such as Big Bad Wolves (2013) and the upcoming High Wire Act.

All Under One Roof Raving: How Michal Marczak Made All These Sleepless Nights With 3-D-Printed Gear and ADR
Things I’ve Learned as a Moviemaker: Terry George