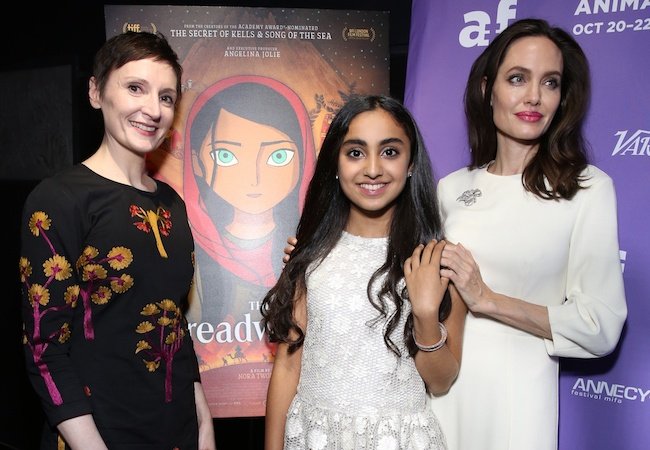 On Friday, October 20, Angelina Jolie walked the—well, blue—carpet of the Chinese Theater in Hollywood for the inaugural edition of Animation Is Film, a festival presented by GKIDS, Variety, and Annecy.

Jolie delivered an opening statement before the weekend festival’s first screening, the TIFF favorite The Breadwinner, a Canadian-Irish-Luxembourgian project on which she served as producer. In her introduction, Jolie reminded the audience that the struggles of women and girls continue to require worldwide attention, and that animation has the power to expose American audiences to stories and characters we might otherwise not have access to.

Based on the 2000 novel of the same name, The Breadwinner tells the story of Parvana, a young girl who lives with her family in Taliban-occupied Kabul, Afghanistan. In a city and time where women can’t appear in public without a male escort, Parvana cuts her hair and masquerades as a boy in order to support her family after her father is jailed for offending a cruel young man with ties to the Taliban. The beautiful and impactful film, which won the festival’s grand prize and audience awards, follows in the tradition of Irish studio Cartoon Saloon’s Oscar-winning The Secret of Kells and Oscar-nominated Song of the Sea.

A packed theater rose to its feet to give The Breadwinner a standing ovation, followed by an insightful Q&A featuring director Nora Twomey as well as newcomer Saara Chaudry, the voice of Parvana. Indeed, one of Animation is Film’s greatest strengths was its concerted focus on the filmmaker; of the 12 features in competition, nine were accompanied by post-screening interviews with directors and producers who had flown in from all over the world (or who, in the case of Masaaki Yuasa, called in for a big-screen Skype session). Expertly moderated, each conversation celebrated the auteurs and their work, as well as the medium in all its forms.

“And isn’t it wonderful just to see something that isn’t trying to be other than animation that revels in being drawn?” asked critic Charles Solomon of the audience of The Big Bad Fox and Other Tales, which won the festival’s special jury prize. Solomon’s interviewees, directors Benjamin Renner and Patrick Imbert, also worked together on the Oscar-nominated Ernest & Celestine.

Another grand success of the festival’s was its attention to the international animation industry. “I’m always very excited when we have films outside the four or five big producing countries,” said Animation Is Film founder Eric Beckman in a pre-festival interview.

“It’s really great to see this kind of filmmaking coming out of Colombia,” said Beckman of South American production Virus Tropical, which had its world premiere at the festival. “It has a very unique voice, and takes you into the world of [growing] up in South America. It gives you a window into that culture.”

Another standout was Birdboy: The Forgotten Children, which was released in Spain back in 2015 and has since been acquired for North American release by GKIDS. Co-director Alberto Vázquez explained (as translated by our own Carlos Aguilar) that the film’s original title, Psiconautas, which means “mental travelers,” is a term often used in reference to drug problems. Appropriately, the film’s protagonists are a group of anthropomorphized animal children who traverse a dark, post-apocalyptic island in hopes of escaping their drug-addled families and peers, as well as their own addictions.

Birdboy: The Forgotten Children is a dark take on addiction in a post-apocalyptic world. Image courtesy of Animation Is Film

Incredibly dark, Birdboy is exemplary of a type of animated film rarely produced stateside, where the children-oriented works of Disney, Pixar, and DreamWorks reign supreme in the industry. Far from scornful of American blockbuster animation, however, the festival also included showings of ever-popular The Incredibles and this year’s The Lego Batman Movie—both of which were complemented by filmmaker Q&As—as well as Snow White and the Seven Dwarfs, Disney’s first-ever animated feature.

For the denizens of Los Angeles, the weekend-long foray into the world of animation seemed to be sorely needed. Young fans, old fans, families, professionals, students, industry players, and more showed up in droves to pack every single showing of the weekend to the brim. If the 10 sold-out time slots were any indication, this festival shows strong promise for an expanded version next year.

Animation Is Film certainly set out to prove something. (It’s in the name, after all.) And while it’s always been clear to serious fans of the form, whoever went into this festival a nonbeliever came out preaching: animation is film. From classically beautiful anime to kid-friendly choices to experimental visuals to critical examination of society, Animation Is Film’s varied programming showcased all that animation can and should be. MM

Louisiana Film Prize: An Event Unlike Any Other, Offers $50K to Prove It
2017 AFI Fest Preview: 10 Films and Filmmakers From This Year’s Line-Up You Should Track Down