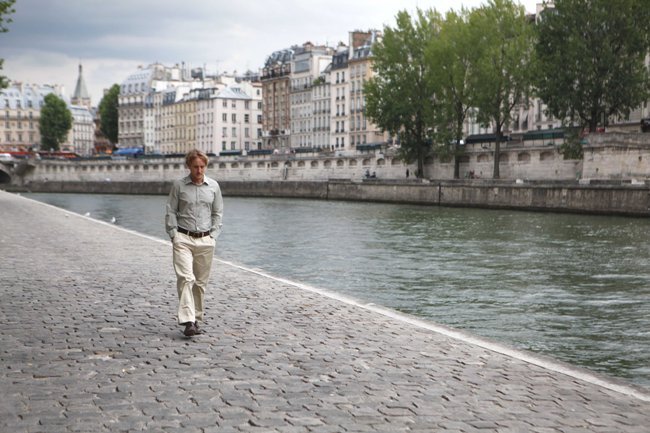 The art. The architecture. The food. It’s no wonder Paris is one of the top tourist destinations in the world.

It’s also a city that has proven to be the ideal shooting location for many American moviemakers. Fish-out-of-water stories about Americans touring the historic city and (usually) finding love have been around for quite awhile. The latest film in this unique sub-genre is Woody Allen’s new romantic comedy Midnight in Paris, which opened this year’s Cannes Film Festival. Owen Wilson and Rachel McAdams star as an engaged couple whose relationship is put to the test while traveling in the City of Light. The movie, which includes a supporting role from Carla Bruni (wife of French president, Nicolas Sarkozy), hits theaters May 20. Here are some other “Americans in Paris” movies that every Francophile should see.

An American in Paris (1951)
directed by Vincente Minnelli
This classic musical stars the irrepressible Gene Kelly as an American World War II veteran living in Paris (though the entire movie was shot on Hollywood soundstages) and trying to make it as a painter. Love blossoms when he falls in love with a French girl (Leslie Caron) he meets in a restaurant. With its toe-tapping songs by George and Ira Gershwin, An American in Paris was a huge success, winning six Academy Awards (including Best Picture and Best Musical Score) as well as an Honorary Award for Gene Kelly. Today, it’s considered one of the greatest movie musicals of all time.

Charade (1963)
directed by Stanley Donen
Unlike An American In Paris, this Hitchcockian blend of thrills, romance and comedy was actually filmed on location in Paris. The film concerns an American woman, Regina (played by Audrey Hepburn), who returns to her home in Paris from a vacation in Switzerland only to find that her husband (who, unbeknownst to her, was involved in illegal activity) has been murdered. Unfortunately for Regina, her husband’s former partners in crime (including George Kennedy and James Coburn) are convinced she knows the whereabouts of money owed to them and are willing to do anything to retrieve it. She turns to a man of mystery (Cary Grant) for help. With its masterful tone of suspense and romance, beautiful Parisian cinematography and witty banter between Grant and Hepburn, Charade still holds up as a fun-filled cinematic adventure. In 2002, the movie was remade into the misbegotten The Truth About Charlie, directed by Jonathan Demme, with Mark Wahlberg and Thandie Newton attempting to fill the formidable shoes of Grant and Hepburn.

Last Tango in Paris (1972)
directed by Bernardo Bertolucci
Unlike the many other light romances on this list, Last Tango in Paris is a bleak, despairing film whose raw sexual content lead to the film receiving the dreaded X (now NC-17) rating in the US. The film centers around a middle-aged American hotel owner (played by Marlon Brando, in a searing performance) living in Paris who, while mourning the suicide of his wife, begins a passionate affair with a much younger, engaged Parisian woman (Maria Schneider). With its dark, violent sexual material, Last Tango in Paris was controversial in its time, leading columnists such as William F. Buckley to denounce the film as “pornography disguised as art,” while other critics, such as the revered Pauline Kael, praised the film for its fearlessness. Wherever you stand, Last Tango in Paris remains an unforgettable experience.

French Kiss (1995) & Forget Paris (1995)
directed by Lawrence Kasdan; Billy Crystal
The mid-1990s (specifically, May of 1995–both of these films were released within weeks of each other) seemed to experience a boom in American romantic comedies set in Paris. In Lawrence Kasdan’s French Kiss, a distraught woman (Meg Ryan) flies to Paris to confront her cheating fiancé (Timothy Hutton) and in the process becomes involved with a charming petty thief (Kevin Kline). In Forget Paris, Billy Crystal (who also co-wrote, co-produced and directed the film) stars as an NBA referee who goes to Paris to bury his father, only to fall in love with a woman (Debra Winger) he meets there. Once he returns home, he finds himself unable to “forget Paris.” While both of these films are middling, rather generic romantic comedies, they both feature lush cinematography of the historic city and reinforce the indelible image of Paris as the city of love.
An American Werewolf in Paris (1997)
directed by Anthony Waller
Okay, we admit we chose this one solely for its title, since this paltry sequel is a huge step down from the classic that inspired it, John Landis’ genre-defining horror-comedy An American Werewolf in London. The sequel concerns an American tourist (Tom Everett Scott) traveling through Paris who becomes unwittingly involved with a group of werewolves (one of whom is played by Julie Delpy, making her first of three appearances on the list). Unfortunately, the film never lives up to its great title (which references the original film as well as the aforementioned classic musical), instead devolving into a dispiriting array of cheap scares and abysmal special effects.

Before Sunset (2004)
Directed by Richard Linklater
The second sequel on the list (though this one is about as different from An American Werewolf in Paris as can be) is a follow-up to the beloved romantic drama Before Sunrise, in which a young American tourist (Ethan Hawke) and French woman (Julie Delpy) meet on a train and spend a day in Vienna, trading their thoughts on life and love. Before Sunset is a similarly stripped down film, focusing solely on the conversation between the two characters, who haven’t seen each other since their fateful encounter of the first film, nine years earlier. The film plays out in real time, as the two characters spend an afternoon together in Paris, pondering what might have happened if they’d stayed in touch over the years. With its thought-provoking dialogue about fate and chance and nuanced, naturalistic performances from Hawke and Delpy, Before Sunset is proof that a movie filled with nothing but walking and talking can still be completely enthralling.

Paris, Je T’Aime (2006)
directed by Various Moviemakers
Paris, Je T’Aime is an anthology comprised of 18 short films from moviemakers around the world, including the Coen brothers, Alfonso Cuarón, Tom Tykwer, Sylvain Chomet, Walter Salles and Gus Van Sant. Each segment is centered on the belief that Paris is a “city of love.” While several of the shorts revolve around American tourists, none is more poignant than the closing segment of the film, directed by Alexander Payne (Sideways). The story is narrated by Carol (Margo Martindale) a lonely mail carrier from Denver, Colorado who recalls, in awkward French, her first trip to Paris with her French class. Running only six and a half minutes, this bittersweet short adeptly captures Carol’s sad yet hopeful life. It also proves to be a perfect love letter to the City of Light.

2 Days in Paris (2007)
directed by Julie Delpy
Julie Delpy returns for yet another Paris-set tale, although this time she has a much larger behind-the-scenes presence, not only directing and writing the film, but also serving as co-producer, editor and composer of the film’s soundtrack. The movie is an intimate comedy-drama about a dysfunctional New York couple, Marion and Jack, (Delpy and Adam Goldberg) who make a trip to Paris to visit Marion’s parents (played by Delpy’s real-life parents). Their relationship becomes increasingly strained as Marion runs into a number of ex-boyfriends, which makes her jealous, neurotic boyfriend more and more uncomfortable. With its likable yet emotionally damaged characters (especially the hilariously quirky Jack), 2 Days in Paris is an interesting flip-side to the well-balanced relationship featured in Before Sunset. Delpy is currently in post-production on the sequel to 2 Days in Paris, entitled 2 Days in New York, in which Marion has broken up with Jack and is dating a new boyfriend, played by Chris Rock. MM