Simply Good: Alice Rohrwacher on Casting Off YouTube and Having a Wolf on Set for Happy as Lazzaro

A feature so notable, even Martin Scorsese couldn’t resist its delightful spell, Happy as Lazzaro promped him to get on board as Executive Producer. Ruggedly quaint Inviolata, a fictional and precisely named small town in the Italian countryside, is the isolated land where the fairytale that is Happy as Lazzaro unfolds. Hardworking Lazzaro (Adriano Tardiolo), a model farmer whose disposition for good is taken for granted, is part of a group of sharecroppers under the oppressive rule of landowner Marchesa Alfonsina De Luna (Nicoletta Braschi), perhaps sometime in the last century (no specific dates are ever provided).

Long days in the sun and little rest are met with diligence and zero complaints from the servile lead, whose kindness must not be mistaken with foolishness but seen as enviable grace. Upon befriending his master’s son—arrogant Tancredi (Luca Chikovani)—Lazzaro’s unending loyalty is put to the test by the brotherly pledge he thinks there is between them. Soon, an ominous wolf, a scandalous secret, and a radical change in scenery act as a time-defying turning point for a divine force to set in.

Winner of the 2018 Best Screenplay Award at Cannes and currently nominated for an Independent Spirit Award in the Best International Film category, Rohrwacher’s magical blessing of a movie exploits the title young man, a figure of immutable benevolence, to turn the stagnant waters of cynicism into a flowing river of hope for skeptic viewers to drink from.

Like most ideas with personal nuances, Happy as Lazzaro began percolating into Rohrwacher’s consciousness long before it was a concrete ambition. “All stories usually come from far away,” she told MovieMaker over the phone from Italy. “It’s been a while since I first wanted to tell this story.”

Getting closer to the tale she sought to tell meant creating distance between her and her familiar surroundings, a process expedited when in 2016 she was selected as the New York Film Festival’s Filmmaker in Residence. Five weeks in NYC with the explicit purpose of writing became fundamental to solidify her thoughts into a screenplay. “It allowed me to get detached from my country, from my environment, and to look at everything with a set of new eyes,” she said about the opportunity. “Therefore, I became a little bit like Lazzaro and I found myself in another time, and that helped me very much.” 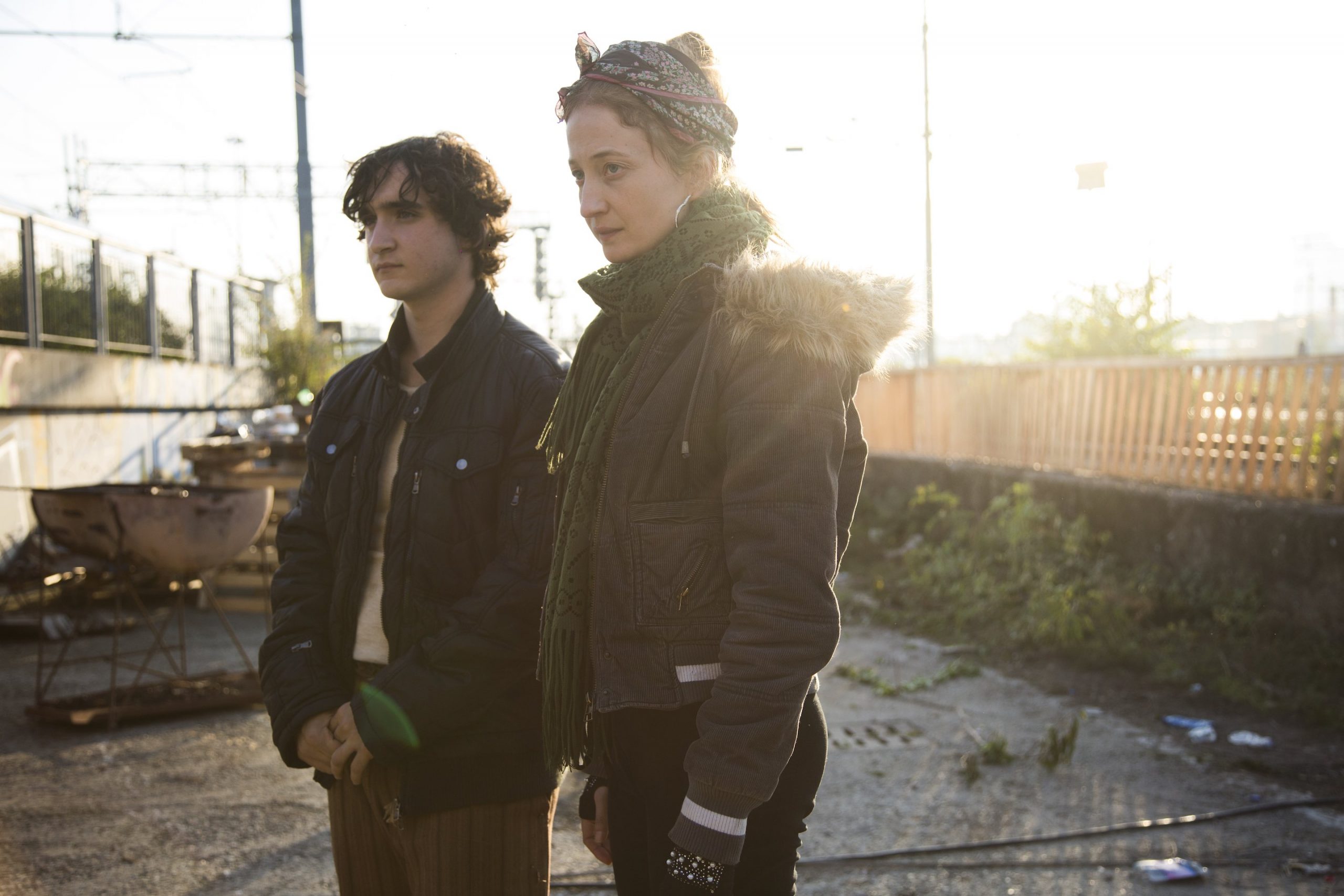 Adriano Tardiolo and Alice Rohrwacher on the set of Happy as Lazzaro.

As a child in the early 1980s, the director lived in a home that had been abandoned by farmers, not unlike the one Lazzaro comes across during a key moment in the narrative. “I lived in this house that was like an empty shell, and I’ve always wondered why those people had left,” she explained. Rohrwacher grew up trying to make sense of the events that lead to the former inhabitants’ departure, which eventually pointed her toward stories about the end of the sharecropping world.

“I collected articles from newspapers that talked about this Marchesa that had kept a number of sharecroppers on her land, without informing them that sharecropping was no longer legal in Italy, taking advantage of the fact that they were so isolated,” she said.

One day, while she watched the news on TV, Rohrwacher saw images of migrants coming into Europe through the sea. Looking in their eyes, she realized these people who left their homes are no different than all others who’ve been marginalized by history and who’s suffering is perpetuated. That epiphany helped her to make the connection between the Marchesa’s enslaved farmers and refugees fleeing in desperation.

“My country is living in a very surreal situation right now. There is, unfortunately, a lot of racism going on. I thought that maybe, if I used a fairy tale, a fairy tale that told the story of a domestic migration, then that might give people the tools to interpret the present,” explained the filmmaker.

Her intentions with Lazzaro, as she described them, were to work against the erroneous, preconceived notion that a hero’s journey must result in great change. “I wanted to portray someone who is unchangeable, somebody that remains still even as time travels around him.” He represents something that not even the end of an era can transform, a fixture that you might lose at some point and find intact again later. She wanted to convey the idea of “un-changeability.”

When casting someone to personify Lazzaro’s qualities, Rohrwacher didn’t have any requirements regarding how old the person should be or what kind of physical appearance he was supposed to have. “We were just looking for someone that would convey the idea of a good person, a generous person, a person that would be simple but not a simpleton.” It was a tall order in today’s disingenuous world, but fortunately not implausible.

Fresh-faced Adriano Tardiolo was discovered during a casting call they held at a high school that focuses on training students to pursue careers in accounting. However, he didn’t partake in the casting, “We met him just by chance walking in the hallways of the school building.” But even after having found their ideal man, he wasn’t keen on jumping into acting.

“We wanted to find someone who was able to love this character without thinking that he was a stupid guy, and when we found Adriano, it wasn’t easy to convince him, because in a way he was so similar to Lazzaro, and he didn’t want to attract attention to himself,” she said. Initially, Tardiolo thought making a movie was quite ridiculous, but his tune softened when the production noted that making a movie is far from frivolous and demands introspection.

Eclectically assembled, the remaining cast included over 50 real-life farmers, the director’s own sister, seasoned actress Alba Rohrwacher, and renowned star Nicoletta Braschi, known for her role in the Oscar-winning drama Life is Beautiful.

For teenage Tancredi—who like most other characters also has an older counterpart during the second part of the film—Rohrwacher conducted an unorthodox search. “We found him in an unusual way: looking at videos on YouTube,” she said about Luca Chikovani.

“We were looking for someone who would be a prisoner of his own imagination. We felt that perhaps all of the people who have their own channels on YouTube and produce videos there might fit that description.” They looked at hundreds of videos on the platform until they came across Chikovani, a Georgian-born influencer and musician.

Tommaso Ragno and Adriano Tardiolo in Happy as Lazzaro

Beyond the human world, the most bewitching performer was the regal wolf that materializes at pivotal instances in Lazzaro’s quest for his lost tribe. The imposing animal grew up in the wild on French territory, but at some point, strangely enough, its pack decided to chase him away. Ever since that hurtful dismissal, the wolf has been living in a farm, a place that acts as a sanctuary for wild animals. There, it spends times with other wolves in a similar situation. That’s where Rohrwacher and her team found it.

Working with such a majestic creature created a special atmosphere for everyone involved, explained the director. “The wolf commanded respect and silence from the first time he walked on set.” They attempted to shoot with it in continuity without having people leave during its scenes. “He became part of the ensemble,” added Rohrwacher. “He was not isolated from the rest of the movie.”

Prevalent across many cultures, lupine tales can be interpreted with countless variations depending on who is reading. In Happy as Lazzaro, the fable includes a beast that only the unwavering selflessness of its smiling idol can tame. “For me the wolf represents fear, but in the end, the fear turns into something different. It becomes an element that comes close to the soul of Lazzaro,” added the moviemaker.

Even if not overtly expressed on screen, Rohrwacher confirmed the wolf’s appearance is a creatively loose reference to the Wolf of Gubbio, which Saint Francis of Assisi confronted in response to violent attacks against livestock and humans. Just like in that ancient 13th century, Lazzaro also subdues evil with beatific kindness. “We need to realize that it is the presence, the smell of Lazzaro that turns the wolf into a good presence, a good character in a way,” she stated.

Rohrwacher’s philosophy when making a movie is to have all its moving parts be in conversation with everything that’s around them. No component should go unnoticed, but rather be always present, especially in a spiritual piece of cinema like the one at hand.  “When dealing with a movie following certain fairy tale rules, you need the texture of the movie to be really rooted in the earth, to be really real,” she added.

For that purpose, coveted cinematographer Hélène Louvart returned to collaborate with her after The Wonders. She ensured those grounded sensibilities were upheld as new imagery came to light. “We’re always looking to portray the things that we don’t know,” said Rohrwacher. “The beautiful part of working with someone with whom you have a lot in common, and have a history in common, is that you don’t want to repeat things that you’ve already done. You’re always looking for something new, like a challenge to explore together,” she concluded.

Happy as Lazzaro provided an unexplored playfield perfect for everyone involved to step away from commonplace storytelling. What could be more uncommonly revolutionary than the land of holy wonder Rohrwacher has molded, where offering goodness without restraint is likely the most supernatural of all powers. MM

Happy as Lazzaro is now streaming on Netflix. All images courtesy of Netflix.

Still Learning: Ben Is Back Writer-Director Peter Hedges on Depicting Addiction
The Best Places to Live and Work as a Moviemaker 2019: Big Cities