Each film is about its own challenges.

This doesn’t mean logistical hurdles but, rather, the challenge of never repeating yourself, of always staying fresh. Starting with the writing, I look for as many opportunities to try something new, step outside my comfort zone, and pivot away from my previous film in ways that I feel both excited by and afraid of. I am lucky enough to have a consistent crew of collaborators who feel the same way.

During my first conversation with Chloe Sevigny for Golden Exits, she said she had previously been hesitant about working with me because my films seems to include ad libbing and improv, which she is terrified of. I decided then and there not to rely on this in Golden Exits. This set me off on writing in a very different style—slower, calmer, more measured form of dialogue, stripped of the snappy comedy I fell back on with my earlier films. The question then became how to approach shooting this style of writing and acting in a complimentary style without being obvious. Talking about our work, my five-time cinematographer Sean Price Williams and I often bemoan the boxes people feel that we end up in. He has said many times that he doesn’t only want to be known as “the 16mm guy” or “the handheld guy,” even though his work in those two areas is peerless in the modern independent film landscape. I commiserate with this and want to challenge him as much as myself. When people respond to the slow, deliberately blocked, three-minute long two shots in Golden Exits by saying “I didn’t know Sean had this in him,” I am always eager to say, “I did.”

I wouldn’t ask anybody to meet a challenge that I am not enthused by or would attempt to do myself. I wouldn’t hand over a script very similar to the last movie and demand that the department heads find new ways to execute my dearth of originality. Golden Exits is my third collaboration with composer Keegan DeWitt, costume designer Amanda Ford, editor Robert Greene, sound designer Ryan Price and hair/makeup designer Amy Forsythe. Each of them are on my mind while writing, all while I attempt to find new territory to mine. If, for this film, the idea is to return to Brooklyn but not replicate any ideas from Listen Up Philip then the note to Keegan on the score has to be “no brass.” The Listen Up Philip score is a very traditional jazz piece and, in accordance with this, is very brass heavy. I also had the idea that, in unison with the narrative idea of conversations largely playing out in half-truths and unspoken feelings, the music must do the emotional expressing that the characters are suppressing. Those were the two ideas I presented to Keegan, along with the observation that most independent film scores seem to make use of the same instruments. You never hear anything big, lush, or melodramatic. Since the syntax and content of the film is none of those things, I thought it might be interesting to lay down a score that wouldn’t seem out of place in a 1950s melodrama over tiny, intimate conversations. 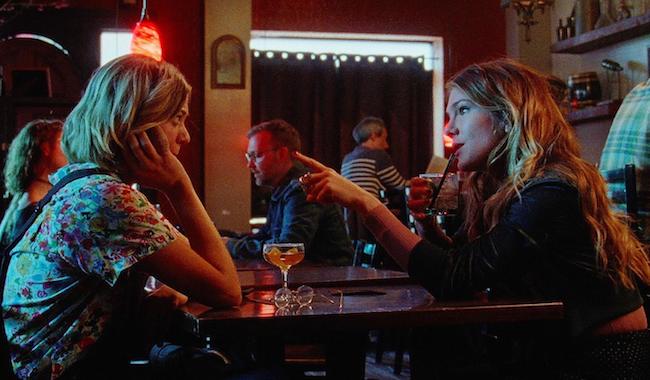 In New York, to qualify for the city’s tax credit filming incentive, you must rent and shoot at least one day on a qualifying sound stage. This is one of many boxes you have to check if you want to receive around 20 percent of your spending back. Usually, most movies will build a bathroom or closet and shoot half a day for a four-line scene in order to satisfy this. I wondered why nobody took this as an invitation to go as far as possible—to build entire sets. Much like the idea of a lush score, this points me toward working against one of my favorite observations: You never see that. You never see low-budget movies building precise, intricate sets for specifically creative purposes that have nothing to do with tax credits. I asked Scott Kuzio, production designer of Listen Up Philip who co-designed Golden Exits alongside art director Fletcher Chancey, if this would be possible. Along with prop master Stephen Phelps (another Philip veteran) they created a basement office set so densely precise yet flexible to our filming needs that a seasoned Hollywood producer whose last film cost over $100 million was shocked when I told him we built it from scratch. It was deeply satisfying and made me want to play more with set design and construction, so much so that the next film we are making will rely almost entirely on it.

That is always the way the pendulum swings. By the time one project is over, the ideas in it have either entirely satisfied me or have simply whet my appetite enough for me to seek out ways to do them again, on a grander scale and with more experience. The elements of each film that I find most exciting and rewatchable during the edit are the contributions of a crew who I respect deeply and whose work matures and develops exponentially faster than my own. Each member of the crew will go off and make five more films after we wrap while I just finish this one. To me, this is the key to learning from the experience of working with others. Sean is always discovering new technology in lighting and bringing it to our music videos as a sort of trial run. Robert makes his own movies and understands things about rhythm and pacing that a director making one movie every other year cannot possibly grasp. Amy does hair and make-up on Stranger Things. Keegan composes entire runs of television shows like HBO’s Divorce. All of these people collect experiences that I am bottomlessly eager to absorb from them when we are lucky enough to reunite for another collaboration. MM

Golden Exits opened in theaters and on VOD/Digital HD February 8, 2018, courtesy of Vertical Entertainment and Sony Pictures. The Metrograph just completed a six-day retrospective of films by Alex Ross Perry.

From Stage to Screen: How Rebekah Fortune Made the Transition From Theater to Film with Just Charlie
Fighting Words: Samuel Maoz’s Foxtrot Portrays Grief in Strictly Visual Terms