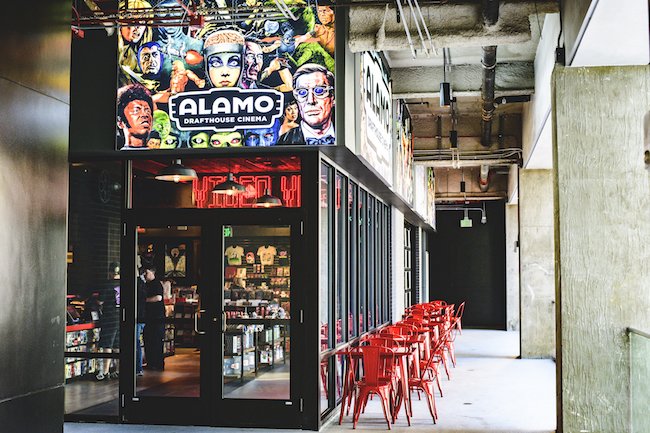 Aren’t we all still mourning the loss of Cinefamily?

The beloved, homegrown repertory theater in West Hollywood grew in its short ten-year lifespan to capture the heart of film-loving Los Angeles. It all came apart even quicker when whispers of a toxic sexual culture within the company became a resounding chorus in the local press. In late August of 2017, the organization suspended all operations. By the fall their HQ on Fairfax stood vacant.

Around the same time, a slow trickle of reports began to emerge about a similar entity, the Alamo Drafthouse Cinema chain, based out of Austin. IndieWire published a series of articles detailing various female patron and staff complaints of male patron and coworker behavior ranging from lecherous to abusive. This culminated in a report from Splinter this February chronicling the whole ordeal, stretching back as far as fall 2016 and including new testimony. The report established, as its title proclaimed, “a long history of minimizing sexual assault and harassment.”

Unlike Cinefamily, whose board of directors described the “damage caused to the organization by the conduct of some” to the L.A. Times as “irreparable,” Alamo has survived. CEO and Founder Tim League published a public mea culpa. The same day as the Splinter report, the company posted a strenuously worded, overhauled code of conduct to its website. In the midst of the fallout from this fever period of exposé and apology, the company is opening its 40th location in Los Angeles. It will be the flagship franchise in the city, which has been in talks for nearly a decade.

If the company makes good on its vow to protect women patrons and staff, downtown and the east side at large may be recouping on what was lost with Cinefamily. The L.A. Alamo is located on the second floor of The Bloc, a massive commercial development on 7th between Hope and Flower. The Bloc sits atop the 7th Street/Metro center transit junction, the city’s most interconnected metro stop (four lines, connecting the west side, south L.A., Long Beach, North Hollywood, and Koreatown).

Rachel Walker, L.A. Head of Creative and Programming, said Alamo’s situation above such a massive nexus of traffic isn’t an unexpected boon for business, it was a design feature. League, who attends the opening and preview week of each new location, spoke enthusiastically of the location’s break with local wisdom by settling away from the west side. So much industry infrastructure is concentrated on the west side and in the city center, including independent cinemas and arthouse-oriented audiences. Though the east side has the wonderful Downtown Independent, Laemmle’s Pasadena Playhouse 7, the Los Feliz 3, and Silverlake’s Vista Theatre (the latter two operated by Vintage Cinemas), the region has historically been underserved by this part of the market.

Alamo’s programming ethos will make it the only of its kind in the region, and it outsizes its competition two, five, in some cases tenfold. The L.A. Theater has 12 screens running state of the art Barco 4K Laser projection. The smallest theater seats 40 while the largest, which has also been outfitted with 35mm projection capabilities, seats 63. The programming will range from tentpole studio features like The Lion King, to arthouse fare like Fast Color, local exclusives like a scheduled 35mm run of Once Upon A Time… in Hollywood, and screenings of classic (often independent) films. First up: the new 4K restoration of Do The Right Thing.

A huge selection of home media await in Video Vortex inside the L.A. Alamo location

One of Alamo’s signature features is its food and drink service. The L.A. Drafthouse bar is stocked with 48 American craft beers on tap, in addition to ciders and kombucha. Patrons can order specialty, movie-themed cocktails like the L.A. Confidential, a spicy tequila drink with firewater bitters, off menus designed to look like ’80s VHS cases. The 95 percent from-scratch kitchen upstairs cranks out restaurant-quality entrees and spritzed up cinema classics, orderable not only in the spacious lobby but at your seat during a screening, another Alamo signature.

One of the exciting components unique to the L.A. location is Video Vortex, the conglomerate video rental, merch vendor, and tabletop game space adjacent to the bar in the lobby. In collaboration with the American Genre Film Archive and League’s own collection, Video Vortex has amassed roughly 40,000 titles across a wide variety of eras and genres for rent, for free! Also folded in is Mondo, a film poster/collectibles/apparel retailer, and a hallowed space dedicated to Vidiots, the adored, last-of-its-kind video store turned non-profit. A yearlong programming partnership with Vidiots was announced out the gates, to be titled “Tales from the Video Store.”

If Angelos have all happily been spending $18 to view first runs at Arclight, they’ll all happily spend the same amount for diverse, independent programming in one of the most exciting, full-service theaters to open in the city in years. MM

How They Did It: The Farewell Writer-Director Lulu Wang Shares Secrets to Turning Your Life Story into a Memoir Movie
Skin Writer-Director Guy Nattiv On Turning His Oscar-Winning Short Into a Feature