Musical, Flesh-Eating Mermaids in 1980s Poland: With The Lure, Agnieszka Smoczyńska Holds Nothing Back 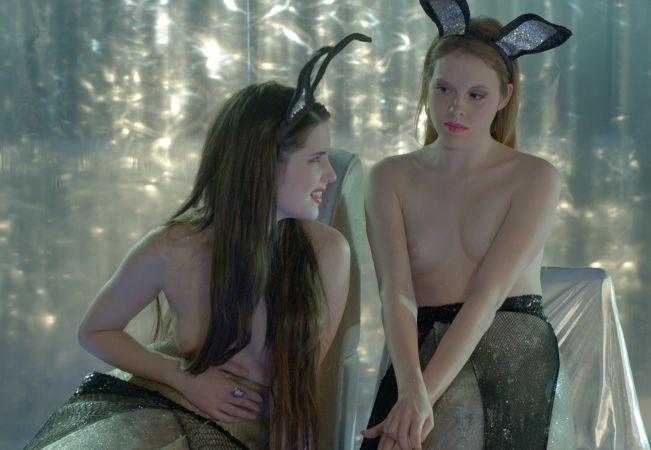 In reference to unusual releases, the phrase “unlike anything you’ve seen before” gets bandied around a little too often.

Most times, the denomination is an exaggeration, but when it comes to Agnieszka Smoczyńska’s debut feature, The Lure, a new Polish work of originality and irreverence, that description is absolutely applicable. Nothing in recent memory rivals the audacious premise behind this gem. For all the mermaid movies that have been made, never before have they been invited into a musical, set in the 1980s, that presents them as comically hypersexual beings within a horror-film setting. Hey, it works!

Deliciously bloody and lyrical, Smoczyńska’s interpretation of these fantastical sea creatures turns on their objectification via the male gaze. She uses them as centerpieces in a decadent world populated by sequins, outlandish dance numbers and a sleazy club. As Silver (Marta Mazurek) and Golden (Michalina Olszańska), two seductive sirens with beautiful voices, unveil the pleasures and dangers of life on land as nighttime performers, men and women around them begin to either fall for their charms or grow jealous of them. Once love has bitten one of the mermaids, the film leaves behind its fairy-tale origins and swims into darker territory. Yet its heart belongs to the alluring Polish-language songs of its soundtrack.

Silicon tails, flamboyant outfits, elaborate production design and an overall handcrafted spell give Smoczyńska’s almost-impossible-to-believe-it-was-made musical a tangible lusciousness that digitally rendered images can’t replicate. As far as new voices go, hers is a boisterous one. Who knows what else is in store? MovieMaker soaked in Agnieszka Smoczyńska’s imagination during her most recent visit to Los Angeles, when we discussed The Lure’s birth through musical composition and the 31-day process of shooting the film.

Carlos Aguilar, MovieMaker Magazine (MM): The Lure is one of the most insanely singular films to come out Poland, or anywhere for that matter, in a long time. Did you always knew you wanted it to be a musical with mermaids?

Agnieszka Smoczyńska (AS): No! At the beginning, I wanted to make a normal psychological drama, because a friend of mine, who’s a scriptwriter, came to me and said, “Aga, let’s make a film about the parents of a very close friend of mine, who used to play music in a dance club. I would love to make a film about them as children in such a place.” That really resonated with me, because my mother ran a restaurant when I was a kid. It was my childhood, this environment. I thought, this was a great idea. I was a little bit afraid, though, because it’s set in the 1980s, and it was my first film, and the budget is higher for a period film. After a month of working on it, one of the musicians told us she didn’t want to make that film because it was too close to her, and there was too much alcohol involved. Then Robert Bolesto, the scriptwriter, said “OK, let’s make them mermaids.” It was so absurd, but we agreed. We used mermaids as a mask so we could hide behind it. The mermaid is a metaphor for the girls growing up.

MM: At what point did you decide to incorporate the musical elements, and to also give the film horror undertones?

AS: Robert wanted the Wrońska sisters, Barbara and Zuzanna [songwriters and members of the band Ballady i Romanse], to compose songs from the very beginning. Because they were mermaids, and because the environment was a dance club with people playing live music, the mermaid protagonists impose this musical element. After maybe a year of working on it, we decided to also make the sirens devour people, and that’s why it’s a horror film. We wanted to show them eating people and singing and dancing.

MM: Tell us about the process of creating the actual songs, both musically and lyrically. Who wrote them, and how were they integrated into the screenplay?

AS: We were working together from the very beginning, from the first draft. There was a group of us: Robert, me and the Wrońska sisters, the composers; one of them writes lyrics and the other composes. There was also the sound designer. Robert, for example, would say, “Zuzanna, we need a song for Silver and a song for Golden.” We would meet once a month for a year, and we discussed the story and the music, and after the first draft of the script, Robert wrote the second draft of the script with the sound designer. Then we put all the songs into it, because I wanted to hear them and treat the script as a score.

MM: Were the songs recorded before everything else was in place? How crucial were they in the overall development of the narrative?

AS: Yes. They were recorded as demos. The Wrońskas recorded them. They would sing and play piano, but we all knew the melody, the energy and the emotion, and we put that into the script. At first [the soundtrack] was about four hours long, so it was too long, but we knew how to improve it. The impact of the composers was huge, because we were collaborating from the first draft of the treatment to the editing. And the sound design combines reality with the songs. Some people tell me the translations in the subtitles aren’t so good, but they are great poems in Polish, and you can see the irony and the bitterness, and I like [lyricist] Zuzanna’s way of writing. Robert is very brutal when he writes, and I think that’s the tone of the film, combining the brutality and the lyricism—and the irony, because there’s also ironic humor.

MM: How common is for a Polish filmmaker to make a musical? This isn’t a genre often associated with the cinematic tradition of your country.

AS: There are no musicals or horror films in Poland, save for one or two. When I went to producers or investors, they thought I was completely crazy, because there is no tradition, and there’s no audience for such films in Poland. Musicals were born in the U.S. It’s completely different in Poland. We have psychological dramas, we have big directors like Kieślowski… but now, after our film, I think there are two musicals [in the works], so I hope it’s changing. There’s a change in the new generation of Polish directors.

AS: It was very difficult, because it was my first film, but I had received some awards for my previous shorts, so that made it a little better. In Poland we have the Polish Film Institute, which gives money for films. They have a budget of 100 million złoty a year, which is about $30 million. Our budget was around 5 or 6 million złoty, which is about $1.3 million.

MM: With such limited resources and such an ambitious project, how did you and team manage to pull off some of the most complicated sequences in the film, some of which require specific effects?

AS: We had to think about how to show the things we wanted to show. Before the shooting started, everyone said to me, how are you going to do these fish tails? And I really didn’t know. I asked a very good post-production company to co-produce with us, and they agreed, but they said, “We can only have five takes with the fish tails.” We knew we there couldn’t be extra takes, which was very hard, but because of that, I had to be very prepared and very disciplined. We shot all the underwater scenes in under 10 hours, which was almost impossible, but we did it, and then there’s only one take of when they are put inside the tank. There were no extra takes, because it was in the morning, and the swimming pool was supposed to be open. You can imagine how stressful it was, but also how high-energy it was. I also have to tell you that the crew was so happy to make this. We had only 31 shooting days, and for a musical, that’s almost impossible. And we only had two weeks of preparation, because of the money.

MM: Tell me about the choreography, both in terms of the two mermaids and the numbers that involved multiple dancers. That elements must have really elevated the difficulty.

AS: I had two choreographers. One of them was Kaya Kołodziejczyk. She prepared the movements of the mermaids, how they moved and they behaved, and the small songs. Then there was the second choreographer who choreographed big songs with lots of people. There was only one rehearsal before shooting the big scene in the store. It was very economical, and the choreographer was very experienced, and he asked the dancers to come to the set and they prepared for one day. We only had one day of shooting, both inside and outside a shopping mall. The location was almost free, because after we finished shooting, they destroyed it. The problem was, a shooting day is very expensive, and we couldn’t have more than 31 days.

MM: Why did you decide to have physical or practical mermaid tails, rather than creating them digitally?

Marta has said that, wearing the tail, you feel how heavy it is and you can’t even move, so you have to use different muscles and find another way of moving. It really helped the actors very much. They were made from silicon, and they were very heavy. Inside was sponge, with a mechanism, and a guy outside would move the mechanism.

"Trial By Fire:" 25 Years Later, Quentin Tarantino Looks Back on How Reservoir Dogs Tested Him at Sundance
MovieMaker Minute: Why Luca Guadagnino’s Call Me By Your Name Was Shot Using Just One Lens