Due to its placement in late Fall and the strength of its programming team, AFI Fest has always felt like a who’s-who of the past festival season, culling the greatest hits from Cannes, Berlin, TIFF, etc. This year the fest seems to take a step further in that regard with strong efforts from auteur favorites (Michael Haneke’s Happy End), genre explorations, and American premieres (Aaron Sorkin’s Molly’s Game).

Always making a point to champion women filmmaker voices, opening night belonged to Dee Rees’ Mudbound, and new efforts from French masters Claire Denis and Agnès Varda came later in the week. If new films aren’t your thing, there was also a comprehensive retrospective of Robert Altman’s work—with many of the 12 selections projected on film—culminating in a closing night screening of his magnum opus Nashville, with Lily Tomlin and Ronee Blakely on hand for a Q and A. There was something for everyone at this year’s fest. Here are a few of our favorites.

In the late 1970s former movie queen Gloria Grahame, once known for femme fatale turns in classics such as In a Lonely Place and The Bad and the Beautiful, was down on her luck and struggling to revive her career on the stage in the U.K. There she met and began a torrid affair with Peter Turner, a working class actor nearly three decades her junior. When Grahame was diagnosed with terminal cancer, she insisted on spending her final days in the home of Turner’s family.

Based on Turner’s memoir about their passionate, but short-lived romance, Film Stars Don’t Die in Liverpool provides rich roles for Annette Bening, who bears a remarkable resemblance to the late Oscar-winning actress and nails her particular vulnerability and little girl voice, and Jamie Bell, who displays unexpected depth as a young man who realizes he will have no future with the woman he loves. As a TCM fanatic, I had high hopes for this to restore luster to the controversial reputation of Grahame. The deeply felt work of the two actors and the visual flourishes used by director Paul McGuigan to distinguish flashes back and forth in time and varying perspectives on events that affected the relationship help elevate the material beyond standard fact-based melodrama.

Before proceeding to the intimate after-party at the Roosevelt Hotel where guests including Warren Beatty were serenaded by Elvis Costello who performed the movie’s haunting theme song “You Shouldn’t Look at Me that Way,” the stars were interviewed onstage by festival director Jacqueline Lyanaga. Bening revealed that she’d been attached to the project for 20 years, while Bell confessed he hadn’t heard of Grahame before receiving the script. – Jeremy Kinser

With married duo Hélène Cattet and Bruno Forzani’s hyper-stylized Let the Corpses Tan, female-centered Marlina the Murderer in Four Acts, repertory screenings of McCabe & Mrs. Miller and The Good, the Bad and the Ugly—showcasing just a few, westerns cropped up across all countries at the fest this year creating an unofficial through line. It seems only fitting that the strongest of the new takes on the genre is simply titled Western. German filmmaker Valeska Grisebach’s return to the big screen since 2006’s Longing, follows a group of German contractors sent to rural Bulgaria to construct a power plant. A carefully constructed slow burn in which themes bubble just under the surface—only coming up for air in the most subtle and well-timed moments. “Toxic masculinity” being the operative word here, the audience is forced to grapple with ideas about nationalism, as well as the universal search to find a place to truly call home. Cast primarily with amateur actors, Grisebach finds captivating faces with a success that would make Bruno Dumont jealous; lead Meinhard Neumann exhibits a quiet strength that internalizes the best qualities of the classic John Ford loner.

Similar to Rossellini’s Paisan, the ideas of language and communication are at the forefront here as Grisebach makes the case that forging a real connection with another—as an outsider—is not entirely dependent on the sharing of a common tongue. There is a beautifully heartbreaking moment when Meinhard shares how his brother has passed, and Adrian (a well-connected Bulgarian villager) can’t understand the German but quietly comprehends, “You’re saying something sad right now.”

Meinhard’s Legionnaire backstory coupled with the ambiguous dancehall ending points directly to Claire Denis’ Beau Travail; Valeska Grisebach establishes herself as a filmmaker who is able to play with genre tropes and filmmaker references while always maintaining control over a world that is wholly unique, wholly her singular vision. As a new convert, I join the rest of the film community in praying she doesn’t wait another 11 years for her next project. – Caleb Hammond

Thoughtful, charming and at times horrifying, celebrated short moviemaker Léa Mysius’s debut feature Ava turns the classic coming-of-age tale on it’s gradually blinding face. Similar to last year’s Raw, Ava is a French film artfully portraying the terrors and tribulations of female puberty. Noteworthy similarities aside, Ava’s titular lead (Ava) is much younger than Raw’s Justine—aligning her closer to another thematically-relevant film, Diary of a Teenage Girl, in the context of 13-year-old Ava’s budding relationship with 18-year-old Juan—and although there are enough parallels to warrant an interesting double feature, Ava shines in it’s wholistic uniqueness and rebellion of traditional structure.

Early in Ava’s story she is diagnosed with gradually depleting vision, inevitably causing blindness in low light. Although shaken by the news, experiencing (terrifying) nightmares and expressing subtle affect, the news is only a catalyst for Ava (portrayed to expert vulnerably fierce effect by first-time actress Noée Abita) to kick start her anarchic teenage reign. The classic beats of youthful rebellion are hit in stride; defiance of her mother, romantic intrigue, a stick-it-to-the-man take on authority. This is only the baseline, however, as Ava, say, dognaps the scene opening jet black dog she deems Lupo, or uses neighborhood kids for sling-shot target practice. Normal kid stuff.

An especially interesting (though divisive) aspect of Ava is its refusal to stick to a singular tone. As described by Mysius in the post-screening Q&A, Lupo is ultimately the main through line of the story, guiding Ava from point A to point Q to point J. This creates a disorientation of plot, jumping genres from comedy, horror, drama and even heist frantically. The benefit of this style is the interjection of great sequences: a montage of Ava and Juan holding up a nudist beach in full body paint, a dance sequence to Amadou and Mariam’s “Sabali”, a damn great shot of Ava, Juan and Lupo riding on the back of a motorcycle. The fun had with these frantic tonal shifts more than justify them.

On my short but sweet list of movies caught at AFI Fest, I wouldn’t consider Ava the best—Foxtrot took the crown there. But it was my favorite. It’s a fun, unique little gem of a movie that resonates with the freedoms and uncertainty of youth. Due to US regulations for nudity don’t expect this cut of Ava receiving distribution in the states, unfortunately, as Abita was only 17 at the point of filming. Mysius says a cut exists that would be cleared for US distribution, but she likes the original cut better. – Grant Vance

Few films in recent memory have resonated with me as profoundly as Samuel Maoz’s Venice-winning masterpiece, Foxtrot, did. The soldier-turned-director made his debut while in his late forties with 2009’s Lebanon, directly inspired by his experiences inside a tank during the 1982 Lebanon War.

Continuing his examination of the Israeli military from a humanistic standpoint, his latest—which also won the top prize in Venice—revolves around the death of a young recruit and the ravaging effects this has on his parents’ lives. Moral simplicity has no place in a story where the weight of destiny, responsibility, and history drag the characters into an elliptical confrontation with their own guilt.

A cinematographer by trade, Maoz is an artist that employs all of cinema’s visual tools in affecting fashion. He is not concern with realistic depictions, but with sensorial storytelling. Tension creeps into every disorienting aspect of the frame as the partial protagonist, Michael Feldmann (Lior Ashkenazi) is unable to grapple with the sudden loss. All existent accolades wouldn’t be enough to recognize the caliber of nuance reflected in the sorrowful turn. Form and performance work in tandem for the cinematic blow of emotion that forces audiences to gasp in more than one instance.

Overhead shots, an oddly enchanting musical number, a revelatory hand-drawn segment, a soul-piercing score, a masterful acting showcase, unexpectedly uplifting humor, and plenty of visual poetry mingle in Foxtrot, a film that cements Maoz as one of the most audacious auteurs gracing the screen today. This is not only a frontrunner for the Best Foreign Language Film Oscar, but one of the most indispensible films of the year. – Carlos Aguilar MM

AFI Fest ran in Hollywood, California from November 9-16, 2017. Did you attend AFI Fest last week? Let us know your favorite film in the comments. 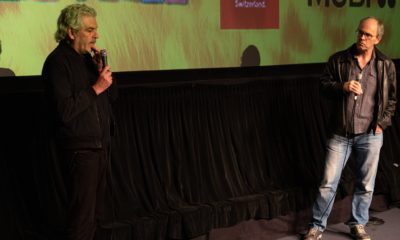