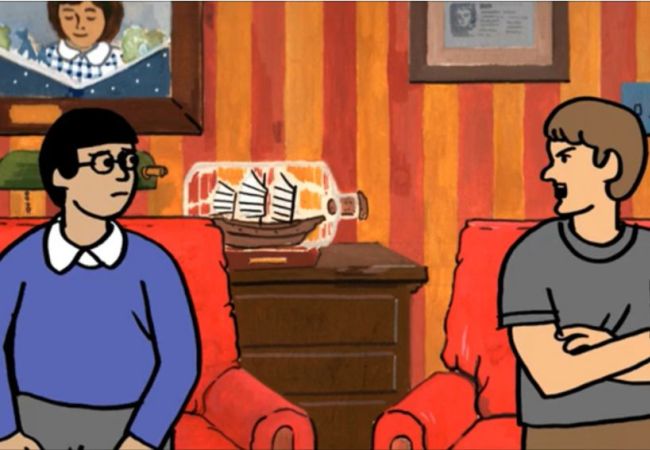 AFI Fest’s arrival in fall heralds the true beginning of the holiday season for many Los Angeles-dwellers.

With such great cinematic pickings on offer, the festival can feel like Christmas in… well, in November. Fresh off the 30th edition of the festival, which ran Nov. 10-17 this year, MovieMaker‘s editors and writers picked the screenings that made up their personal “best of the fest” experiences. If and when the following titles come to a theater near you (most of them don’t have distribution as yet), be sure to check them out.

I saw Dash Shaw’s My Entire High School Sinking into the Sea on a Monday night, which means that while the Chinese 6 complex was blessedly calm compared to the weekend, the agony of driving to Hollywood on a weeknight drove the stakes for this film up higher than usual. Luckily, it was worth it. As a newcomer to Shaw’s work (he is an acclaimed comic book writer and artist, though this is his first feature), I didn’t have a basis by which to compare his (animated) film to his comics, but one thing was nonetheless apparent: Shaw has taken his new medium’s motion capabilities and run with them. My Entire High School is a kinetic explosion, a spinning kaleidoscope of line and color and texture, from the pinwheeling names in its title credit sequence onwards. It’s an absurdist tale about a group of sophomores whose shabbily reinforced multistory school building falls into the ocean after an earthquake, forcing them to scramble their way to the top floor of the sinking structure to avoid a watery end. The film boasts top-notch vocal talents: Jason Schwartzman as protagonist Dash, Reggie Watts as best friend Assaf, Maya Rudolph as Verti, their Yoko. Lena Dunham, Alex Karpovsky, Susan Sarandon and John Cameron Mitchell add more star power to the ensemble; everyone seems to be having fun with the droll dialogue. The film mixes genres (teen comedy, disaster movie, coming-of-age story) as well as it does media—the images looked like they had been rendered in, variously, spray paint, crayon, acrylic, watercolor, paper cut-outs, pencil, marker, photography and who knows what else, and that collage made for a lively treat.

During the Q&A, Shaw mentioned both painter Peter Saul and Charlie Brown as references (there are other obvious ones, as in a bathroom brawl scene that mimics Street Fighter and other old-school fighting games). Also present at the Q&A was composer Rani Sharone, whose equally lively score Shaw described as “half the movie” (for his part, Sharone cited Goblin and Tangerine Dream as references). The 72-minute film played alongside Patrick Bresnan’s and Ivete Lucas’s short “The Send-Off,” documenting a prom night in Pahokee, Florida; Bresnan was at the screening as well, which made for an informative, if slightly unwieldy, Q&A. – Kelly Leow

The state of our union was once strong, but now fractured. So seems to be the overriding sentiment of AFI Fest’s third shorts program, which combined experimental techniques and documentary form to depict troubling and intimate corners of social, political, public and private life in contemporary America.

Laura Poitras, who, since the release of her film Citizenfour in 2014 has been synonymous with a recent revival of cinematic skepticism of government institutions, could be considered the mastermind behind the program’s tone of discord, distrust and disillusionment. Her journalism film unit, Field of Vision, co-created by AJ Schnack and Charlotte Cook, brought two short features to the program: Poitras and Henrik Moltke’s “Project X,” which delves into the chilling secrecy of NSA employees’ daily and nightly operations, and “Speaking Is Difficult,” Schnack’s gut-wrenching compilation of grainy 911 phone calls made by bystanders in the midst of mass shootings throughout the United States, and footage of the sites at which the chaos unfolded. The stoic, disembodied voice that reads from the NSA staff guidelines on the organization’s wire-tapping partnership with AT&T in “Project X” invited cynical laughter from audiences (which increased with each cold recitation of the word “redacted”). “Speaking Is Difficult,” on the other hand, stunned attendees nearly into post-screening paralysis, as its unrelenting barrage of traumatic audio and haunting imagery left most silent and only a few able to clap in a show of support and solidarity for victims of gun violence. Whereas the former film’s skyscraper-centric cinematography called to attention the menacing facade of corporate entities, and the unnerving reality that our current administration has enabled mass surveillance and data collection of private citizens, the latter used its title as a call to action to speak out against the stranglehold of the gun lobby on citizens’ right to live freely and safely in the public sphere.

Other shorts in the program—“A Thousand Midnights,” “A Stroll Down Sunflower Lane,” “Made. Not Born!,” “Ears, Nose and Throat,” “The Bloop,” and “Jáaji Approx”—used archival footage and home video to explore subject matter ranging from the threat of violence African Americans live under in the deep south and inner-city communities, to Arab-American life in the 1980s, to competitive weightlifting, to unexplained underwater phenomena and more. Each of the films’ makers displayed a clear fascination with the minutia of their subjects’ everyday lives, which provided an effective point of contrast with their documentation of extraordinary current and historical events. – Max Weinstein

Sleekly assembled to conceal an explicit political discourse, Bertrand Bonello’s Nocturama paints a picture of lost youth through a carefully calibrated allegory. Without presenting their pasts (and certainly not suggesting their futures), Bonello centers on a group of teenage terrorists as they perpetrate highly destructive acts in the heart of Paris. Guided by a seasoned extremist, these fresh minds have been transformed into individuals willing to become enemies of the state for an ambiguous ideological goal. Once the dust settles and the fires have extinguished, the ethnically diverse team hides in a department store to ponder the consequences of their actions, to be children once again, and to image the normal lives they could have had but relinquished.

Bonello’s follow-up to Saint Laurent adapts his elegant and stylized approach into a psychological puzzle to look at modern civilization and its decay. Initially edited as a heist film and subsequently arranged to reach nearly unbearable tension in its final minutes, Nocturama is not shy about using cinematic grammar to remain thematically mysterious. Asking for sympathy is not the film’s intent, but neither is entirely vilifying its characters. The lavish microcosm of capitalism and material ideals in which these teens spend the night is a prison not only for them but also for global youth today. It’s only when seen through the filter of radical reactions that the messages become clearer. Not only did Bonello write and direct the film, but, as in most of his films, he composed the score, which is singularly haunting and undeniably current. With Nocturama, Bonello burns institutions down literally and metaphorically in an ensemble piece as crucial for our time as Gus Van Sant’s Elephant was over a decade ago. – Carlos Aguilar

Philippe Lesage’s The Demons is a formal exercise whose autobiographical elements may well be exorcising its creator’s own demons. The film presents terrifying adolescence through the eyes of 10-year-old Félix (doe-eyed and pensive newcomer Édouard Tremblay-Grenier). While innumerable films chronicle the nightmarish confusion and awkwardness of pre-teen and teenage years, Lesage wisely steps back into a moment right before middle school, where Félix’s fearful naiveté fights for relevance against his budding ability to understand what is going on around him.

Slowly and with much precision, Lesage reveals how different elements shape a young person’s developing worldview. The AIDS crisis, realizing that your father might be too close to your friend’s mother—these all warp and pervert Félix perception and, understandably, lead him to act out in ways that he can’t begin to understand the implications. When Félix and his friend lock a shy boy in a tiny gym locker for perhaps a bit too long to be funny, we are uncomfortably drawn to reflect on any unnecessarily cruel acts that we might have committed in our own youths. Félix is, after all a young boy; Lesage—reflecting on the autobiographical nature of the film pre-screening—quipped that we “shouldn’t worry because I am OK now.”

Much of the post-screening Q&A conversation revolved (unsurprisingly) around the remarkable performances of the young principal actors. The casting process was long and arduous, and a turning point came when Lesage fired his friend Pier-Luc Funk from one role and convinced him (with much difficulty) instead to take the role of tortured deviant lifeguard Ben. With Pier-Luc Funk, Lesage subverts the genre trope of the older predator. A younger Ben also provides connective tissue between Félix and Ben’s respective journeys and the titular “Demons” they face.

Utilizing long shots with wide lenses (often of children playing accompanied to classical music), Lesage’s patient voyeurism signals Michael Haneke as the clearest and most accurate comparison; however, The Demons operates within a more identifiable cultural discourse. A considerable amount of dread arises via the scary “true” stories these kids pass around to each other—a dread that eventually manifests itself in a very real way in the second half of the film. This narrative shift and experimentation with structure and genre is what ultimately lifts Lesage beyond the simple Haneke comparisons and helps to confidently establish him as an important new voice, alongside his French-Canadian compatriots Denis Villeneuve and Xavier Dolan. – Caleb Hammond

Time is capricious in Things To Come. It moves as it sometimes does in life, with the stealth of a trickster. Mia Hansen-Løve’s portrait becomes a question, as Natalie Chazeaux (Isabelle Huppert) navigates her own philosophical stance in the glaring eyes of deteriorating reality.

We are thrown into the bustling city of Paris. Natalie is a philosophy professor, the wife of Heinz (André Marcon), the mother of Chloé and Johann (Sarah Picard and Solal Forte) and the daughter of Yvette (Edith Scobs, recently recognizable from Summer Hours, the film by Olivier Assayas, Hansen-Løve’s own partner in crime).

“I thought you would love me forever,” Natalie responds when her husband leaves her for a younger woman.

Freedom is the question. How does a woman d’un certain age, who has been freed from a life held together by others, live? A strength of the script is how its allows Natalie’s contemplations to be multidimensional. Facets of uncertainty are woven in clean, elegant, strands, captured by the expertise of cinematographer Denis Lenoir.

One exceptional moment is when Natalie’s cat, Pandora, escapes into the woods. Counseled by her protégé Fabien (Roman Kolinka) that the cat will return, she protests. Pandora has never left the house.

“What about instincts?” he says.

“She’s lived at my mother’s feet for 10 years,” she replies.

She’ll return, he assures her, but Natalie is not convinced.

Isabelle Huppert is a master with the finest understanding of what it means to be present. She carries the film with unparalleled grace—in her subtlety, we are lost in the nuances of Natalie’s walk, glances, smiles, and the placement of hands when she picks fruit or experiences a piece of shocking news. Things to Come is not her first or her last great film, but it is one of her greatest collaborations. – William Paul Smith MM

AFI Fest took place in Hollywood, California from November 10-17, 2016. Did you attend AFI Fest last week? Let us know your favorite film in the comments.

Festival Wrap: Questions of Identity and Legacy Meet On Screen at the Hawaii International Film Festival 2016
Festival Wrap: Washington, D.C. Proves to Be a Capitol of Hospitality at DC Shorts 2016