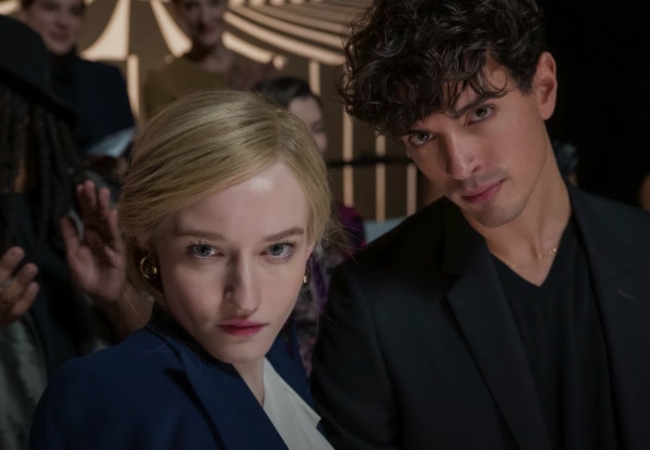 If only one person could watch Don’t Look Up, Adam McKay would want it to be this one particular politician; John Mayer and Jeff Ross remember Bob Saget; the trailer for Netflix’s Anna Sorokin series Inventing Anna is here. All in today’s Movie News Rundown.

Adam McKay’s ‘Sweaty Fever Dream’:  “My sweaty fever dream of a situation,” Don’t Look Up director Adam McKay told IndieWire, “would be Joe Manchin sitting down with his family, thinking, ‘Let’s watch this, it’s supposed to be a comedy, my kids like Leonardo DiCaprio, my grandkids like Ariana Grande.’ And then that ending comes. My dream would be that for one second, Joe Manchin feels it in his bones. For even a second!”

If It Makes You Feel Better, Adam McKay: Even if Manchin doesn’t watch Don’t Look Up, I did, and it definitely gave me anxiety about climate change. So thank you.

Evan Rachel Wood Speaks: An upcoming HBO documentary Phoenix Rising in which Evan Rachel Wood speaks out about her experience with Marilyn Manson is one of two late additions to Sundance in the special screenings section, and will make it’s world premiere on Jan. 23 ahead of its HBO debut later this year.

The Other Late Addition: Is The American Dream and Other Fairy Tales directed by Abigail E. Disney and Kathleen Hughes, in which “Abigail Disney looks at America’s dysfunctional and unequal economy and asks why the American Dream has worked for the wealthy, yet is a nightmare for people born with less,” according to Sundance.

What’s This About Ye?: Speaking of Sundance films, jeen-yuhs docuseries subject Kanye West — or just Ye, as he now prefers to be called — was named by the LAPD as a suspect in a criminal battery investigation, according to Variety. The incident, which occurred outside of the Soho Warehouse club in downtown Los Angeles early Thursday morning, is being investigated as a misdemeanor charge and would carry a maximum sentence of 6 months in jail. West has not been arrested and is, again, only a suspect at this time.

The Memory of Bob Saget Is In Good Hands: On Wednesday, John Mayer and Jeff Ross took to Instagram Live to share their fondest memories of the late Full House star, who died on Jan. 9. Mayer and Ross, both close friends of Saget, were on the honorable mission of driving Saget’s car back from LAX where he had left it parked before leaving to perform what would end up being his last-ever comedy show at Ponte Vedra Concert Hall in Ponte Vedra Beach, Florida.

“I Loved That Guy”: Said Mayer, who shed a few tears during that final ride in Saget’s Prius. “He really was love,” Ross added. “Like, he represented that.”

Zendaya Remembers Ronnie Spector: Ahead of her portrayal of the late Spector in a new biopic, Zendaya said of The Ronettes star in an Instagram tribute: “This news just breaks my heart. To speak about her as if she’s not with us feels strange as she is so incredibly full of life. There’s not a time I saw her without her iconic red lips and full teased hair, a true rockstar through and through. Ronnie, being able to know you has been one of the greatest honors of my life.”

Jenna Ortega’s Journey: We spoke with the absolutely lovely star of the new Scream film, which premieres in U.S. theaters Friday, for our next print issue — but you can read the full story right here, right now.

We’ll Leave You With This: The trailer for the highly anticipated Anna Delvey (or Sorokin, which is her real name) Netflix series Inventing Anna starring Julia Garner as the famous fake heiress.

Don’t Look Up, directed by Adam McKay, is now streaming on Netflix.