There is the authorial kind of A/D voice, and the conspiratorial voice (both for Crime and Romantic Comedy), but there’s another pillar genre with its own voice, a novelistic voice, as though someone has spent years crafting ornate sentence after ornate sentence, and you are meant to decipher each. This genre is Film Noir.

When I think of film noir classics, the ones that come to mind are those that still hold up today, such as Double Indemnity and The Maltese Falcon. As the legend goes, director of The Maltese Falcon, John Huston had only one weekend to get a draft done, and he’d already made other plans, so he asked his secretary to write it for him. She obtained a copy of the Raymond Chandler short story on which the film was to be based, and transcribed it nearly word for word.

And if you look at the script, this story doesn’t seem far fetched, at least not the final part. The plain, curt, yet longer than average action description bears great resemblance to Chandler’s narration, as well as to his meticulously crafted monologues performed by the many brooding detectives that populate the genre.

Dundy and Polhaus push past him into the passageway. CAMERA TROLLIES after them as they open the door to the living room, enter.

Brigid O’Shaughnessy is huddled in an armchair by the table, her arms over her face. Her eyes are white-circled, terrified. Joel Cairo stands in front of her, bending over her, holding in one hand the flat, black pistol. His other hand is clapped to his forehead. Blood runs through the fingers of that hand and down into his eyes.

Cairo does not heed the detectives. He is glaring at the girl huddled in front of him. His lips are working spasmodically, but no coherent sound comes from between them. Dundy, the first of the three into the living room, moves swiftly to Cairo’s side, puts a hand on his own hip under his overcoat and a hand on Cairo’s wrist.

It is a great example of the tendencies of a genre in novel form informing what would be most effective in the action description in a script. If the characters in film noir novels are given to speaking in long monologues, so should the writer in his or her action description. It creates the necessary mood, which in turn informs the characters’ actions, motivations and consequently the audience’s expectations.

This novelistic style has largely fallen out of popular favour for the crime genre, with both writers and audiences tending to prefer a faster pace. But in its place, the period drama genre has adopted it.

British screenwriter Nick Hornby utilizes this A/D voice in his award-winning screenplay for the 2009 coming-of-age drama An Education, and it fits. The film takes place in the early 1960s, and the novelistic style suits the period characters because it matches their dialogue. They are from high society and know it, which means they speak more elegantly than those around them.

This flows directly and seamlessly into Hornby’s A/D voice, which further world builds and sets the tone of the time, establishing a perspective from which the reader should interpret the rest of the events.

Jenny is at her desk in her bedroom, trying to work, but she can’t concentrate. Her hair is tied back in a pony-tail. She gets up, pulls back the curtains, looks out of the window. We see what she sees: a sleepy suburban street at night. She looks back at her desk. It looks even more boring than the street. She looks at her scrubbed seventeen-year-old face in the mirror—so much younger than the Jenny we have seen with David. She makes herself up, and she gets older and more glamorous before our eyes. In her make-up and her school uniform, she’s half-woman, half-child. We hear the noises drifting up from the kitchen: the radio, the washing-up, occasional muffled conversation. Jenny walks out of the bedroom and slips downstairs.

Jenny’s mother and father are doing the washing up and listening to the radio. They have their backs to the door. Jenny enters the room quietly and watches them for a moment. 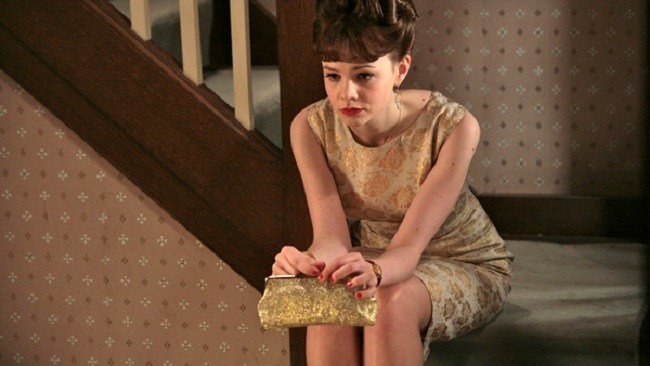 There are no absolutes when it comes to screenwriting. But you should make an informed choice when it comes to A/D voice, as, together with dialogue, it serves as your main tool for getting your story across to a reader. Ultimately, it informs the way you write scenes, and it sets the tone and atmosphere on which every story inevitably hinges. MM