After decades as one of Hollywood’s most lauded screenwriters, Aaron Sorkin makes a play for directing with the high rolling thriller Molly’s Game.

On the set of Molly’s Game, each day that was spent around a poker table ended in a half-hour free-for-all between the professional players that had been recruited to give an extra bit of authenticity to Aaron Sorkin’s adaptation of Molly Bloom’s 2014 memoir. Sorkin, who had never even directed an episode of his beloved TV shows The West Wing and Sports Night, was trying to conjure the excitement of a game that eluded him the few times he’d left ESPN on past a ball game to watch the World Series of Poker. One of his actors, Jeremy Strong, suggested that he let the camera roll after they were done shooting the day’s scripted scenes so that some real Texas Hold’em could commence. Sorkin loved the idea so much that he wrote out a check for “not a great deal of money” that he pinned to the wall for whomever would have the most chips at the end of 30 minutes, and had the crew build a dolly track around the game, using two cameras to capture the action, everything from people raking in chips to cigarettes being lit.

“A lot of the good shots that you’re seeing in those poker games came from that half-hour of free play time,” says Sorkin. “And by the way, you don’t need to incentivize poker players. Even if there’s no money involved, they just want to beat each other.”

This was the kind of inspired idea that producers Mark Gordon and Amy Pascal were counting on when they approached Sorkin with the idea to make Molly’s Game his directorial debut. Shortly after he turned in a first draft just before Christmas 2015, the two had dinner with Sorkin, each bringing a list of 20 directors, no doubt including multiple Oscar winners, to discuss as potential prospects for the film. By the time the check came, they rendered the typically verbose screenwriter speechless with who they really wanted for the job.

“I was kinda like ‘aw, shucks’ at first. I thought maybe they were just being nice, but they were clearly serious and kept at it,” said Sorkin, who was given three weeks to decide.

Behind the scenes with Idris Elba (Left) and Aaron Sorkin (Right) on the set of Molly’s Game. Image courtesy of STX Entertainment

Their overtures were compelling, but not as much as what Sorkin felt was his own moral imperative in bringing Molly’s Game to the screen. He had spent hundreds of hours with Bloom, initially meeting with her as a favor to a friend. He hadn’t expected much to come out of the conversation since adapting a tell-all about the Who’s Who of high society that played at her roving card game was hardly of interest to him. However, he was quickly bowled over by Bloom’s “wonderfully sly sense of humor” and her spine of steel, literally, from the back injury that forced her to put an Olympic-level career in downhill skiing behind her. She later reinvented herself as a poker hostess presiding over million-dollar hands, winning the trust of the many powerful figures who would play Texas Hold’em at her tableplayers who placed their trust in her after she refused to trade on their names when they were arrested by the FBI for their associations with organized crime. Believing he could create an entertaining drama from Bloom’s story without giving in to the “strong, gravitational pull towards the shiny objects: the glamour and the decadence, the money, the poker, the boldfaced Hollywood names,” Sorkin thought it might be time to take a gamble himself in order to protect her story.

Mark Gordon pushed for an answer from Sorkin, who admitedly took a bit of time before agreeing to the project. That was likely the last moment of hesitation he showed as the director of Molly’s Game, in which he displays as strong an eye for the camera as an ear for dialogue. Still, this shouldn’t come as a surprise with anyone who’s familiar with his scripts. Beyond the granular attention paid to descriptive details of any given scene and the musicality of his dialogue, he’s long built inventive structures for the histories he recounts. In this way they feel immediate and alive. He often utilized a defining moment of his subject’s life as an engine to explore the past, whether it’s court depositions in the The Social Network or Apple product launches in Steve Jobs. Molly’s Game is no exception, taking place largely after the time covered in Bloom’s book when she seeks out a lawyer to defend her from the FBI’s charges.

If these present-day scenes feel impossibly intimate, it’s in part because Sorkin virtually transferred his conversations with Bloom to the screen, putting himself in the shoes of Charlie Jaffey, the scrupulous—and skeptical—attorney who ultimately takes her case in the film, asking her about what she left out of her memoir and why she was adamant about putting the privacy of her former players above her own interests. He also quickly realized that voiceover, a first for the writer/director, would give Bloom the chance to recount her past in her own words, an opportunity not usually affforded to women whose stories are often told by men.

“I wanted [the voiceover] to feel like the best TED Talk that you’ve ever been to—that Molly’s been invited to a college auditorium and she’s got a huge screen behind her,” says Sorkin. “But her book was written before she was sentenced, so she didn’t know any of that was going to happen. That’s why the present day doesn’t have voiceover. It’s as if she gave a TED Talk, and when it was over, she walked out the door and 17 FBI agents with automatic weapons were there to arrest her. And now the story gets really good.” 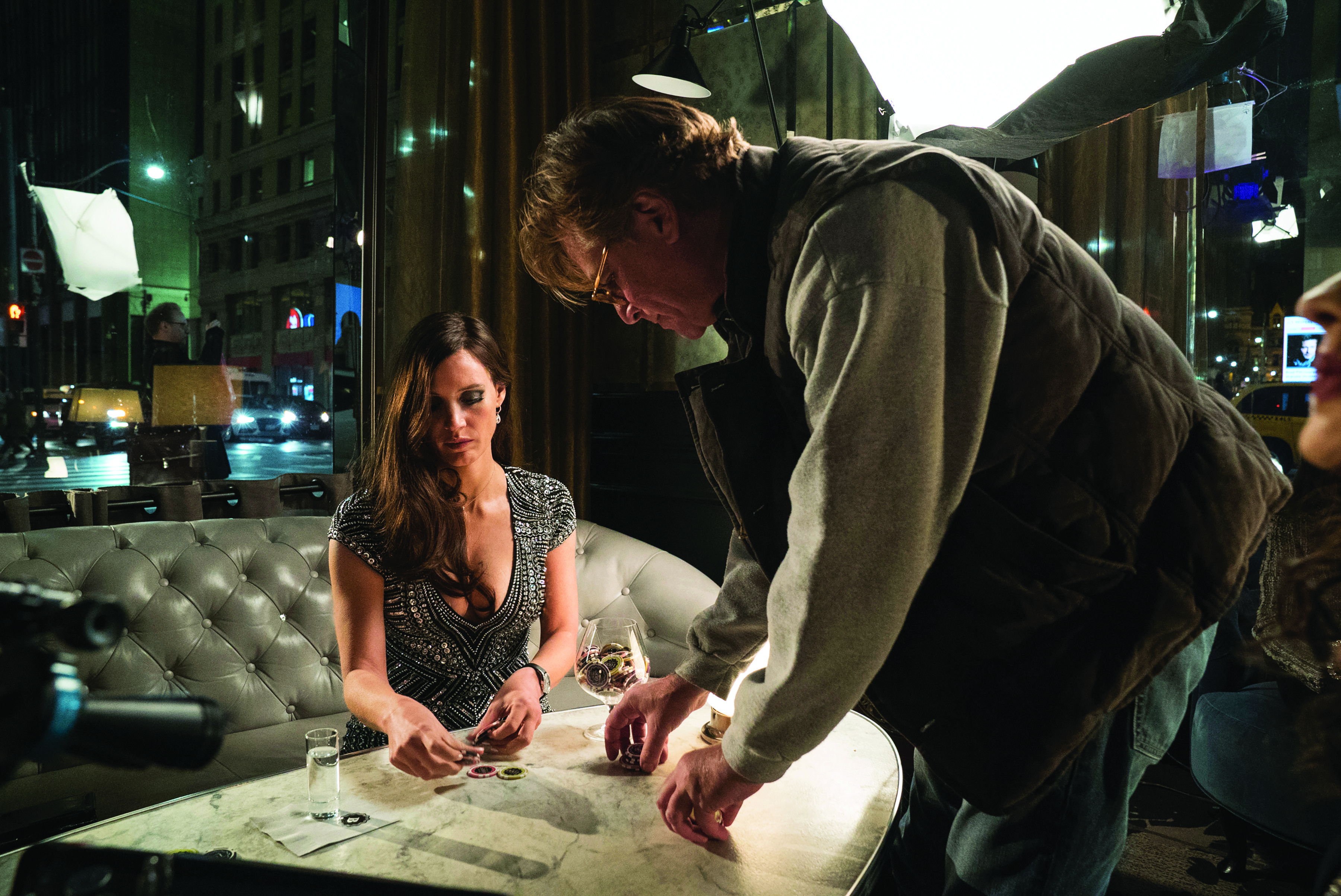 Although he was confident in his script, Sorkin was less certain that the cast and crew would take a chance on an untested first-time director. He was glad to be proven wrong almost immediately with Jessica Chastain and Idris Elba quickly coming on board to play Molly and Charlie, though his most crucial bit of casting may have been finding the right cinematographer in Charlotte Bruus Christensen, the director of photography behind The Girl on the Train. Impressed with her work on Denzel Washington’s Fences, he saw a creative partner who would be patient with his learning curve when it came to figuring out the right lenses and lighting. Despite being such a distinctive screenwriter that he’s acknowledged as a rare auteur in a director’s medium, Sorkin was adamant from the start that in taking the director’s chair he was eager for collaboration, describing his style as “saying ‘yes’ to really talented people when they have a good idea.”

“Aaron was open to suggestions though I thought he wouldn’t be,” says Elba, who literally arrived to the set in fighting shape, having spent the summer training for a kickboxing match that commenced just before shooting. “I think as a director he trusted in his actors more than he would as a writer because it’s our job to bring his words to life and it’s his job to find the truth in our performances. Both Jessica and I have worked with many directors and each brings a unique flavor. Aaron felt like he was discovering the film as it went along in a way that allowed him to be open-minded to our input.”

Along the way, Sorkin would also heed advice from Kevin Costner (who came on to play Molly’s father) to adjust a tracking shot during a late scene in the film set at an ice skating rink, and integrate Chastain’s ideas for how Molly presents herself throughout the film as a woman going through transformation—from someone who dressed to fit in to a woman able to stand on her own.

“John Lennon once said I’d rather have a band than a Rolls Royce, and the fact that John Lennon probably could’ve had both not withstanding, I know what he meant,” Sorkin says of embracing his new role, “I like team sports more than individual sports. I like bands more than solo acts and I like what happens when a group of actors, a group of designers, a group of technicians get together and everybody’s doing their best.”

That spirit brought out the best in everybody during Molly’s Game’s 47-day shoot, in spite of Sorkin’s notoriously dense, dialogue-heavy scenes that made for grueling days that would cover eight to 10 pages of script. Due to other commitments, Chastain and Elba weren’t available for proper rehearsal, leading Sorkin to set up meetings via Skype in the weeks leading up to shooting, talking through these scenes beat by beat. Sorkin wanted the two to come to the set “owning the language,” and would know almost immediately if the prep paid off. The shooting schedule dictated that the scenes in Charlie’s office between Chastain and Elba served as the through line for the film.

“Those were long days, but there was an excitement to it. It was like every day we were doing a one-act play and in the morning after I’d worked with the two of them, then I’d bring the crew in to watch the scene,” said Sorkin. “They’d always get cheers from the crew, so something that could’ve sunk us right at the beginning, which was 45 pages in six days, didn’t. It blasted us off.”

The production also received some unexpected wind at its back—beginning the shoot just a day after the presidential election in November 2016. In the wake of America’s first female major party candidate suffering a tough defeat, the story of Molly, a woman coming up against glass ceilings seemed especially pertinent and timely.

“There was some emotion there,” Sorkin says of the first day of shooting. “We couldn’t have imagined that with what’s been going on in Hollywood, in Washington, in the media with this Biblical flood of claims of sexual harassment that this movie, which is not about sexual harassment, but is very much about a woman navigating a world of powerful men, would be as relevant as it turned out to be. God knows I would trade the fortuitous timing of the movie for a world where the movie wasn’t relevant, but as it turns out, the movie has an extra meaning to it.”

As much as the film is likely to resonate with audiences, it already has for Bloom personally. Although Sorkin intended to screen the film privately for her before the film’s premiere at the Toronto Film Festival, Bloom insisted on seeing it with an audience, but her plea agreement disallowed travel to Canada. Sorkin sought the help of an immigration attorney who secured a 48-hour pass for Bloom to experience her story being celebrated on the big screen. Significantly raising the stakes for Sorkin’s directorial debut.

“It was a very emotional experience for her and for me too,” recalls Sorkin of having Molly at the premiere. “Obviously, the first thing I was grateful for was that she loved the movie. I’ve never had a movie made about me, so I have no idea what that experience is like. I don’t imagine there’s anything that can prepare you for it. And I was prepared for every possible reaction and I will never forget the reaction that I did get. She trusted me with her life.” MM