Getting Access, No Matter the Cost: How Director Mike Nicoll Infiltrated AAU Basketball to Make At All Costs 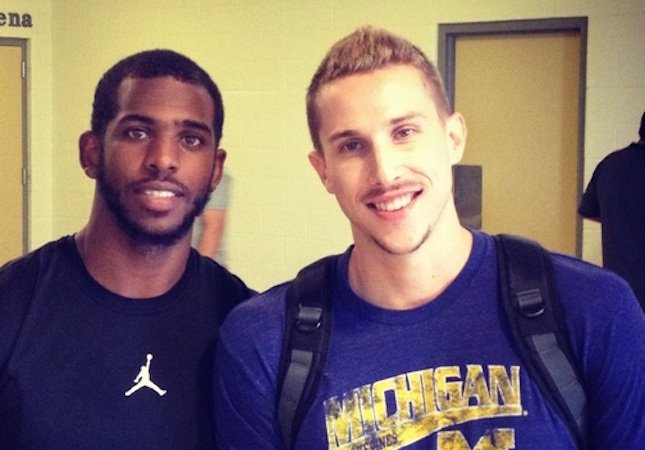 AAU basketball is an exclusive world that most people don’t know very much about.

It’s structured this way on purpose—a figurative velvet rope separates those who’ve received an invite from those who haven’t. When making my documentary At All Costs I wanted rawness and authenticity, so I knew there could be no compromising on casting the true influencers of the culture.

I started developing At All Costs during my last year at USC Film School. This project was my first major move once I graduated, and the choice was an easy one; I spent my formative years playing AAU basketball in southern California, and the culture had a huge hand in shaping the man I would become. I always had an instinct that there were larger, more complex, “adult” things happening behind the scenes that younger kids couldn’t truly comprehend. For this reason I was naturally drawn back into the world to explore its evolution and increasing sphere of influence.

To infiltrate the space, I’d have to leverage my existing relationships to gain the trust of the grassroots gatekeepers’ who could grant me the access I needed. My past experience with AAU was helpful, but it wasn’t the all-access key card I would need. For that I had to get creative and dig through the various degrees of separation within my network to find who I could get to. These are some of the more instructive pieces of advice I can offer.

At All Costs director Mike Nicoll. Courtesy of XLRator Media

You Never Know Who You Actually Know

Comb through your digital rolodex and ruminate on who you know who could connect you to someone you need to know. It turned out I was far more plugged in than I’d initially realized, so I got to work finessing those connections for all they could offer.

Casting is as important in documentary as it is in narrative cinema, if not more so. For your film to have the requisite credibility it needs, it has to feature legitimate leaders, movers and shakers in the environment you’re exploring. This is where the “degrees of separation” theory can snowball; if you get one person to say yes, the next person is more likely to agree if they know another reputable person is already committed. The dominoes begin to fall more easily after you’ve added a few key names to the featured roster.

When Casting, Be Smart About Who You Target First

The first people to come on board for At All Costs were two of the primary characters that we would be chronicling. I pitched them on my vision for the film and they enthusiastically signed on.

Their steadfast commitment would come in handy a few weeks later when I contacted their shoe company for credentials to cover an event these characters would be playing in. The shoe company dismissed my request immediately, with all the elitist condescension you’d expect from a Fortune 500 company. So I returned to my subjects and said, “Hey, I’d love to feature you guys—but I can’t do it if the shoe company won’t let me in the building.” They said, “They turned you down? Hold on, let me make a call.” The next morning I had an email in my inbox from the shoe company apologizing for declining my initial request—and now, miraculously, offering me whatever I needed.

The politics behind this story are inconsequential to this article, but I knew I had two key people on board right away that would help me land the big fish later on. If not for those two initial cast members, the process would have been infinitely more difficult.

Founder/CEO of the Compton Magic, Etop Udo-Ema, poses with his team’s trophies in At All Costs. Courtesy of XLRator Media

My producer Ian Ward compares the process of getting a film off the ground to pushing a boulder up the steepest side of a mountain: You cannot stop pushing. When it comes to gaining access, you will be told “no” countless times—especially as an unproven, first-time filmmaker. You are an unknown quantity, and as such you represent a risk for the entities you’re propositioning.

The law of self-preservation dictates skepticism on their part, which usually results in rejection. It’s safer for them to say no, but you cannot be discouraged… and trust me, your resolve will be tested. Many times. You have to keep knocking on the door, keep ringing the bell, keep sending emails and finding new angles to distinguish yourself. If you show up enough they will eventually respect your commitment. Building the necessary relationships is helpful, but there is no substitute for the will to kick in the door—at all costs.

About a year into production we were still finding our footing. We knew the story, had some great stuff in the can, but there were still holes all over the narrative. We were also running out of cash and needed more than twice what we’d already spent to finish the film.

We decided to cut a trailer that was supposed to live as the backbone of a crowdsourcing fundraising effort. The trailer was long, but compelling—almost more like a short film. We sent it around for notes before posting it live, and before we knew it, we had private investors lining up to fund our finishing costs.

So now we had the money we needed, but what to do with this dynamic video asset? We decided to post it online to give people a taste of what was coming, and in a matter of hours it was picked up and written about by NBC Sports, SLAM, Yahoo and BallisLife, among others. From there, we had pieces of media we could direct people to when they questioned the legitimacy of our project. After that, it was easy for potential interview subjects to say “yes” because they were confident they were attaching themselves to a high-quality film. Things exploded from there. Here’s the first, original trailer we cut to spark interest in the film:

Be Fluent in the Language of the Culture You’re Depicting

No matter which world you’re seeking to penetrate, you will not be granted access if you don’t live, breathe, walk, and talk the culture’s vocabulary and personality. A giant part of At All Costs‘ appeal was the inside-access we were capturing, and there’s no chance we’d have been let into those huddles, locker rooms, offices, buses, airplanes, hotel suites and exclusive gyms had we not been able to relate to those insiders on their own terms. The “gatekeepers” can smell a fake from a mile away. You should endeavor in your pre-production prep to learn as much as you can about the world before you begin contacting potential interview or feature subjects, so you’re maximally dialed into the pulse of their world beforehand. This will go a long way toward gaining the trust of these important people that can make or break your film. MM