How They Did It: DP Daniel Levin Spent a Year Embedded with the FBI For the Series Inside the FBI: New York

We circle an abandoned building in a giant field. I have a seat belt on, but the door is wide open and I cannot seem to shake the need to grasp the helicopter with my free hand, while I hold my Sony A7s and Ikan DS1 Gimbal with my other.

For the past year, I have been embedded with the FBI, as the director of photography on the new series Inside the FBI: New York.

Today we film at Quantico, the famed FBI Academy and training facility. We capture the legendary Hostage Rescue Team (HRT) as they share a couple of their most complex training maneuvers with our crew. The agents present are some of the most elite in the bureau, and because the pilots are required to log a certain amount of training hours per year, we are able to drop in and shoot this exciting action, rarely seen by outsiders. 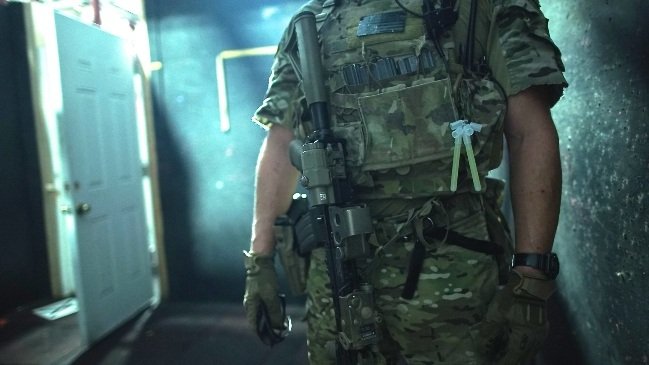 A HRT team member at the FBI Academy in Quantico. Photograph by Daniel B. Levin

They wait on me to call out “action,” as we shoot our first take of the HRT agents rappelling from an adjacent helicopter down to the rooftop of the abandoned building below. From inside the helicopter, I frame up my wide shot, enabling the helicopter carrying the HRT agents to fly into the frame as the agents rappel out both sides, cascading onto the building below. My producer, Joe Van Ek, focuses a Canon C300 upward to catch shots of the agents now rappelling downward upon him. Our sound man, Jackson Devereux, has placed his boom down and is in the helicopter carrying the agents, shooting on a C300 as well to capture their viewpoint.

I feel a bit out of place, shouting orders to these highly decorated, brave men (particularly because an hour ago we weren’t even sure that we would film this stunt). While a scripted narrative might set aside hours, often days, to set and rehearse this maneuver, we are a nimble documentary crew, granted single takes, grasping at action shots. Every crew member is versatile, and handling multiple jobs, which is the only way to survive shooting for hundreds of days, thousands of hours.

I give one last look at my exposure settings and triple check that I am rolling. “Let’s go for it,” I say. “Action!”

We hover as the second helicopter comes flying, carrying the agents. The ropes drop, the agents rappel and the helicopter flies away. It ends as quickly as it started, swift and succinct. Looked good from my vantage. I radio Joe on the ground and Jackson; both confirm that it looked good for them as well. I have an uneasy feeling, as there is but a slim chance that we got all the potential angles on our first take, so we do the run again. Feeling confident that we have the shots we want, I tell my pilot we are good. He confirms, then says, “Hold on—now let’s have some fun.”

The two helicopters get into a formation and start maneuvering side to side, rolling left to right. We are banking above a tree line and river. The pilot is giving us a ride, having some fun with us. I am on a roller coaster. I think to myself that this is a pretty amazing day at the office, one I will think back on for years to come.

An agent of FBI squad C19 during firearms training. Photograph by Daniel B. Levin

I have shot in many unique documentary situations and have spent a good amount of time covering law enforcement, but never have we, nor any other film crew, gained access to the New York FBI field office. Our goal with the series: to tell stories of the individual units that make up the New York field office, as well as to humanize the agents, to give a face to the people that protect us everyday. As the DP, my goal is to capture as much authenticity and vérité as we can. We must consistently remain highly flexible and reactive when the moment is right and we are called upon.

We shoot the majority of the show in a stripped-down, distinct run-and-gun style. The special agents we follow are accustomed to maintaining a low profile on the street, and we don’t want to stick out by following them with huge cameras and crews. We have to act nimbly, jumping in and out of cars and helicopters, and remaining mobile. Furthermore, when we are told that we were shooting a raid or hostage rescue training exercise with only an hour to prepare, we have to figure out how to maximize what we have and to get it right.

We shoot most of the series on C300 Mark Is and Mark IIs, with Canon EF L-series lenses, each rig tailored out with a mix of accessories to each shooter’s liking while all relatively small. More than halfway through our production, the Canon CN-E 18-80mm T4.4 COMPACT-SERVO Cinema Zoom Lens is announced and we are fortunate to acquire one. We become one of the first productions to put it to use in the field.

Each camera operator also has a small mirrorless digital camera, such as a Sony A7s and a Panasonic GH4, that could be used as a dashboard camera or thrown on a Ikan DS1 Beholder Gimbal for tracking shots and smooth B-roll. All these tools are catered towards our camera pperators being compact, one-man shooting teams, as well as giving the operators some flexibility and freedom to experiment with the different cameras and tools available to them. When shooting inside FBI buildings and offices, for security purposes we are not allowed to use wireless transmitters and receivers. We discover the juicedLink Little DARling Distributed Audio Recorders, which internally record to their own micro SD cards. These become invaluable when we go days without a sound man and are restricted to wireless equipment.

From training, to the office and raids, some of my most memorable shoots are the ones that embed me amongst the agents outside the office. Following agents home is something we push for; it’s a side of the FBI that no one has ever seen. For every major operation, we want to start at home with the agents before they go out on the takedowns. Capturing their morning routine before such intense action is crucial in humanizing our characters.

One such instance comes in Episode 4, titled “Gangs and Gangsters,” when C-30, the gang squad, raids a housing project in Spanish Harlem after the death of an NYPD police officer. I’m embedded with Randy, the senior team leader of the swat team. I meet him at his house at about 2 a.m. and shoot him silently making coffee and carefully slicing an avocado to eat for breakfast. Shooting on prime lenses, usually the 50mm 1.2, not only is great for available light, but also creates the shallow depth of field that compliments the peaceful focus and determination he reveals during his breakfast prep. This calm imagery is later contrasted with the huge operation, as more than 400 FBI and NYPD agents hit multiple targets throughout two different housing complexes in Harlem. Traveling alongside the swat team leader as he orchestrates the operation in conjunction with the agents of C-30 is incredibly intense. Again, I have to keep my footprint and presence light as I follow the action and night turns to day. This shoot will become one of the biggest scenes we shoot throughout the production. It would play much differently if we hadn’t caught the personal, intimate moments beforehand.

One of the most humbling and unexpected moments I find myself in is the gay pride parade following the Orlando massacre in June 2016. We film Leo, an openly gay counter terrorism special agent, who leads the agency’s participation for the first time in the pride march. During the parade, I interview an older man who details his shock and amazement to see the FBI openly participating, as he fights back tears.  When he was young, he recounts, he would have been arrested and thrown in jail for being gay, and here, after Orlando, to be marching alongside the FBI agents who are openly gay is nothing short of “spectacular.”

The most eye-opening part of this series for me is discovering an authenticity behind the FBI that neither I nor the public have known about. While shooting HRT training maneuvers is certainly exhilarating and fun, shooting at the pride parade completely shatters my preconceived notions of what the FBI is and can be. I discover a diverse mix of mission-driven men and women of all different races fighting to preserve our safety and the American way of life. Most of the characters we meet throughout the series undo the stereotypes of what I thought FBI agents would be. This gives me hope. As special agent Leo says, “diversity creates innovation.” And innovation is something this country desperately needs.

Lighting: Daylight (“God is our gaffer”) and some 1 x 1 Litepanels

Inside the FBI: New York, produced by Brick City TV and Wolf Films, airs Thursdays on the USA Network at 10 p.m. ET.