"We Still Have Something to Prove:" Amma Asante on Directing A United Kingdom 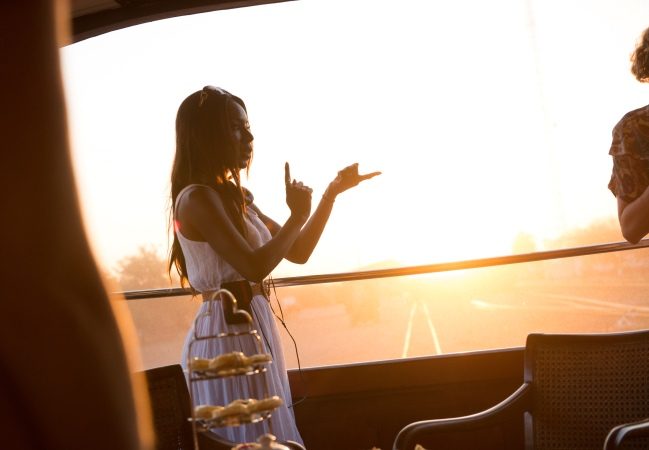 In A United Kingdom, Amma Asante’s follow-up to the critically acclaimed Belle, the British director brings to the screen another gripping real-life interracial love story threatened by political realities and institutionalized racism.

David Oyelowo stars as Seretse Khama, a future king of what is now known as Botswana, who studies in London in the late ’40s to better prepare to lead his people as king. At a dance, he meets the very ordinary but lovely middle-class woman Ruth Williams (Rosamund Pike), and the two soon fall madly in love. They were unaware (although that seems somewhat unbelievable) of the international crisis their romance set off, not only between their respective countries, but also in South Africa, which had just institutionalized the murderous policy of apartheid.

The historical sweep of Asante’s film has a wide reach, but the focus is always on the lovers, who endure betrayals, including by a famous heroic historical figure, and double-dealing by an assortment of very-polite but sneaky Brit diplomats who conspire to do everything they can to keep the couple apart. Meanwhile the British are anxious not to antagonize South Africa, which supplies them with uranium and other mineral resources.

In the screenplay by Guy Hibbert (An Eye in the Sky), Khama is a regal and honorable man, whose speeches to his countrymen about inclusion and unity are inspiring and heartfelt as he tries to persuade his entire tribe to accept this white woman as his wife and queen. At the same time their love affair sets off an international crisis and conspiracies, they remain steadfast in their commitment to each other and to Khama’s obligations to his country as king.

Oyelowo, who is one of the finest actors of his generation both of stage and screen, brought this project to Asante. He said at a junket recently, “The thing I’ve learned, and continue to learn, is that the perspective of who gets to tell the story dictates what the thing itself is—dictates what the narrative is, dictates what the potency of the film is.”

Oyelowo, best known for playing Martin Luther King in Ava DuVernay’s Selma, noted that he was determined to see a different perspective gain a large platform when it comes to storytelling. “Not just because I’m black and [DuVernay and Asante] are black and I want to see black filmmakers have a platform, but because that perspective has been marginalized. The version of A United Kingdom or Queen of Katwe [Mira Nair’s 2015 film] or Selma [by a director of color] is different to the perspective we have largely seen up until now, and that’s important.”

He added: “If [a filmmaker] comes in and goes, ‘It’s about this white woman; I cannot believe she left her family, and it was so hot. And what was she doing fetching water and digging wells? Oh my goodness, this poor girl.’ That’s what you get. That’s not Amma Asante’s version of A United Kingdom. So I want to see more Amma Asante.”

Amma Asante (AA): It’s not deliberate. It’s not something I kind of thought through. I suppose I’ve had a journey to get here. It took me a long time to get to a place where I could make the films I want to make. I just shot a film called Where Hands Touch, which stars Amandla Stenberg and is set in 1944 Berlin, and in reality that was supposed to be my second movie. That was supposed to be the movie after I made A Way of Life. But I just don’t think the industry was ready at that time for the kind of movie I’m making now. So I had to wait a long time. And then because of the script and the various writing I had done that had been passed around the industry, it became apparent I might be the right person to pull Belle together. And when you do something people deem as OK, they bring you more of it. David Oyelowo  saw what I did with Belle and thought, “She’d be a perfect person to do A United Kingdom.” And when I’d earned more stripes, the financing came in for the next film, Where Hands Touch.

In a way, I feel like now that I’ve made that movie that I wanted to make 12 years ago. I’m at ground zero and I’m ready for anything now, but I had to get these movies out my system. I had to find out what my voice was as a filmmaker. While my movies do have similarities they’re also very different, they exercise different muscles for me in many ways. I’m a black female director. There are not many of us. We still have something to prove. We have to prove that we can exercise various muscles: We can do the epic, we can do the intimate relationship piece, we can do the Ken Loach-esque documentary drama. We can do all of those things and more.

MM: What piqued your interest in this subject?

AA: So many things. Oftentimes when you’re looking at a project, it’s a couple of things that attract you, but in this here it was so many. In the first instance, yes, it was a sweeping romance—and I’ve said it with Belle, and I say it all the time: I’m an unashamed romantic and I’m OK with that. Those are the movies I love. I want to make the kind of movies that I want to see as an audience member. But to be honest with you, had this just been a movie about a black person and a white person getting together, there would be very little interest for me. What was interesting is what unfolded once the couple decided to marry.

Susan Williams’ book, Colour Bar, which I read after David approached me, is so evocative but also so intellectually brilliant. The fact that she really understood that to show the power of the couple’s love, you had to understand what that love stood up to, and therefore you had to understand the politics. Even though we had to simplify the politics in the film, you still had to understand it. So the power of that love and what it stood up to was fascinating to me. Also, the fact that the film was set in a world that involved the two continents that are most responsible for influencing who I am and raising me: Africa and Europe, specifically London. My father was a Pan-Africanist. He believed in the united states of Africa. He was raised in a colony that became independent, Ghana, which was the first sub-Saharan colony to gain its independence. He stood in Independence Square and waved that first Ghana flag. So I was really raised as a child who understood what independence meant to at least one African country. My dad believed that “united we stand, divided we fall” and taught me that idea of divide and rule and why it was important to be aware of that all the time. What I saw in the real story of Tshekedi, Seretse’s uncle and Seretse was a microcosm of the divided rule. Let’s take two chiefs, let’s have them fight together, separate them, then have them moving and taking direct rule. I understood that, but in a family context. And what better way to express that whole concept than to do it through family relationships?

MM: What kind of research did you do to understand both the historical and political aspects of the story beyond the personal?

AA: I was very, very lucky that this film was already going to be based on Susan’s book. Honesty—usually I never really say this—but if you like the film, read the book, because it’s incredible. I could only take in 18 pages a day. That was my limit because it was so dense and complex. Even Susan, who’s a brilliant historian, said she had to bring in [British politician] Tony Benn—who was 23 in the movie, though my generation knows him as this old man. A liberal, a man who stood for his ideas and his ideals—to know he had become a friend with Seretse Khama was a big deal to me because he was also a man that my father respected. So even Susan had to call the grand old man, Tony Benn, in to sit down and explain to her how some of these things could have happened in Ruth and Seretse’s life, because they seemed impossible.

Susan’s book was the key, but also it’s important to go back and look at real images. It’s history, but it’s not so long ago, so there are things I could have access to. And of course what I did with Susan was sit down with her and say, “Give me all your research. I’ve read the book and that’s great, but I need to feel that research for myself.” She had the original Life magazines that the couple appeared in when journalists went to Africa and took photos of them. I looked up one of the key journalists who followed them absolutely everywhere. One in particular decided, on their first night in Africa together, to shine a huge car light through the window to try to catch silhouettes of them going to bed together. So it was reading the book and then putting my hands on the research and understanding it through my own gaze and not just through Susan’s.

MM: How did you decide which political events to feature in the film? The ugliness about colonialism didn’t quite come through.

AA: When I came on board the film, there was a real belief that the political side was not where the balance, the weight of the film, should be. That it should absolutely be the love. And it was the love story that we were going to tell. But for me it was key from the get-go that we tell this story and balance it with the politics. For reasons I mentioned earlier, you can’t tell the power of the love unless you understood the power of what they stood up to. But I was committed always to tell that story through the prism of the love story—very rarely stepping out of the couple’s point of view. That guided therefore what you saw; you’re always seeing it as they experience it.

You’re absolutely right that the rawness of colonialism does not unfold that way in the film, but it would have meant I would have had to take you out of the couple’s point of view, which would put you on a different journey. So you are constantly making these choices. You have to decide, “What is the film I’m making?”

Keep ’Em on the Edge of Their Seats: For Lion Screenwriter Luke Davies, Movies Must be Visceral and Emotional
Breaking the Ice (Cube): How Fist Fight Director Richie Keen Survived the Most Nerve-Wracking Pitch of His Life