Children in Peril: Why A Monster Calls Director J. A. Bayona is All About Intensity 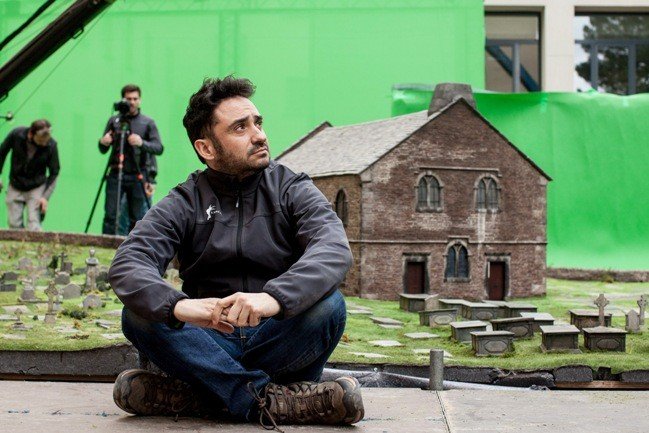 J. A. Bayona is best known for children-in-jeopardy-themed films: the Guillermo del Toro-produced horror movie The Orphanage (2007), and The Impossible (2012), about the 2004 tsunami and starring Ewan McGregor and Naomi Watts.

His new movie, A Monster Calls, is based on the acclaimed novel of the same name by Patrick Ness (who wrote the screen adaptation). The story is centered on 12-year-old Conor (Lewis MacDougall), whose mother (Felicity Jones) has been diagnosed with a terminal illness; he summons up a benevolent tree monster (voiced by Liam Neeson) who helps him to cope with these anxieties.

On the red carpet for the New York premiere of A Monster Calls last week, I asked the 41-year-old Spanish director why children in peril featured consistently into his three films.

About casting MacDougall, the director told me he did a very long audition, with hundreds of youngsters. “He was very different from the other kids,” Bayona said. “He knew what his character is going through.” Sadly, MacDougall’s mother had died a year before they began filming A Monster Calls.

Lewis MacDougall in A Monster Calls. Photograph by Jose Haro

Bayona next moves on to directing the second movie in the Jurassic World series, scheduled for a summer 2018 release. As A Monster Calls has garnered him strong comparisons to Steven Spielberg, the job seems to suit him well.

When you first got hold of the story and you spoke to the writer, what sort of collaboration went on in regards to putting this to film your way?

J.A. Bayona (JAB): I think the first time I sat down with Patrick Ness, my idea was about trying to find light at the end of the story—to find some hope. I think Conor goes through such an emotional journey that I had to find a signal of hope at the end of the film. So I started to think about it, and at that time I didn’t know how exactly to do it. But then I came up with this idea that Conor was an artist. It was like a way of visualization, a way of putting on the screen his own work, his inner work. Somehow, I had this image of the pencil moving, rolling on the floor, leading us to the monster. That was the main tool. His guns were his pencils.

How did you think of Liam for the monster?

JAB: The monster is inspired by the Green Man, who is one of the most important characters in Celtic folklore. I started to think about an Irish actor. From the moment we started looking for someone who has the wisdom and aura, and could bring the soul to the monster, it was obvious that Liam Neeson was the number-one option. We met, and he loved the script, he loved the book, and he really liked my previous films, so to my surprise it was quite easy to get him to play the role.

And you had to map out the entire movie from the weeks that you did with him for motion capture? That couldn’t go back and be changed, right?

JAB: Well, the thing is, we didn’t want only his voice, we wanted the performance. So we spent 10 days shooting motion capture. For me one of the most challenging things was to create chemistry between the kid and the monster, because the kid would not be performing in front of the monster on the set. So from the very beginning it was very important to have Liam acting in front of Lewis. Also it was great because it was a way of getting 10 days of rehearsal, with Lewis doing all the scenes with the monster several times.

Lewis is almost in every frame of the movie. How did you find him, and also did you feel bad about making him cry so much?

JAB: It was a long, long process of auditions, during which we saw hundreds of kids. Because Conor is such an important piece in the film, we needed to be sure that we got the right kid. We did four steps: The first one was a self-tape, the second one was a meeting with the acting coach, and the third was a meeting with myself. The fourth was a camera test in Barcelona. At that time we had four or five very good kids—very good kids. It’s always difficult to make the decision at the end, because you know there are some other kids that are as good as him that can do the film.

But the truth is that Lewis was so different from the other ones, so unique. The way he approached the scenes was different. All the kids were going more toward the emotional aspect, the emotional side that you would expect from a very dramatic scene. But he was more about rage. He was reluctant to show his tears. Even though you can see the tears, he was reluctant to show them. He has such a strength in not showing that. I thought that that dealt a lot with the rage that Conor is showing throughout the story. From the very beginning, I thought that he was special, and he got the job at the end.

Working with the actors on set, it’s a question of getting them the space, the time and the energy they deserve. With kids, if they are too young, it’s a question of patience to try to get the performance. But Lewis being 12, he was quite articulate and a very good actor, actually. I think he ‘s going to do great things in the future. So I treat them exactly the same way as the other actors. And of course you have to cry a lot, but I think crying is not a big deal, really.

Talk about casting Felicity Jones, who is suddenly very hot because of Rogue One.

JAB: I needed a young British actress. At the moment The Theory of Everything was still not released, so she was not that popular, but I remember her from a very beautiful film called Like Crazy. She did an amazing performance in that.

I wanted to keep a sense of beauty on her character, because I knew how physically destroyed she was going to look at the end of the film. But for Conor, she’s still his mother. So before being a sick person, she’s a mother. I wanted to keep that sense of beauty for someone like her. I thought that she was a great actress, and she would portray that image and simultaneously the fact that she was going through such a nightmare situation.

Same with the other characters: With Sigourney Weaver, I’ve always admired the strength and great presence that she has on camera. And the fact that she also shows a vulnerability. I think it was what they did in Aliens—how they turned that character into a mother in the second film. I thought, “She’s a grandmother who somehow feels like a witch for Conor. But at the same time she’s a mother for Felicity’s character.” So that dual ability that she has in some of her best performances was a thing that I needed for this film.

Talk about using special effects in the film, yet keeping the humanism front and center.

JAB: The first time I met Naomi Watts, for The Impossible, I told her, “The best special effect in King Kong is the way you look at the monster. The way you look at King Kong. Because it’s so believable. It’s that I see your face, and I know that the monster is there.” And it’s true, that’s why I was so obsessed with finding this chemistry between the kid and the monster. I really pushed for having this life-sized replica of the heads on set, so always Lewis was acting in front of the monster.

Wasn’t the designer who worked on Pan’s Labyrinth with you?

Monster movies are usually pure escapism, but your films ask people to look at those real fears that nobody wants to think about. What drives you to want to make those films, and do you think you’ll bring that element to Jurassic World?

JAB: I love the idea of going to the cinema and going through an emotional journey. I hate to go to a cinema and see a movie and forget about it five minutes later. I love the idea of making films that stay with the audience, and somehow the films keep growing in their imagination afterwards. The whole thing keeps growing. I love that.

And I don’t know, I’m attracted to that material. I really feel cathartic in the way we talk about the relationship between the mother and the son and the truth and how death becomes a reminder that we need to tell the truth, and we need to be sincere and honest to each other. J. A. Bayona on the set of A Monster Calls. Photograph by Quim Vives

Were you concerned the film was maybe too dark?

JAB: It’s dark, but it’s rewarding and inspiring and enlightening… The human energy we’re talking about—I mean, we’re talking about a monster, and you’re afraid of the monster. But the monster in this film is the result of Conor’s nightmares, yet it’s also the solution. And that contradiction, there’s the humanity, there’s the reality of it. That’s what the kid needs to learn, that things can be black and white at the same time. So your nightmare can be your solution. And that’s very difficult for a kid to process. For him, that can feel like a cheat. Because kids nowadays, they go to movies and we tell them all the time that things are black or white. But they know that things are not black or white, and they don’t experience life in black and white, but they cannot articulate it. This is why the film plays with emotion—from the moment you tell the story from the point of view of a kid, a kid doesn’t have a story to refer to. What they have is emotion.

What can you say about the new Jurassic World film?

JAB: I’ve done three movies that were pretty intense. I wanted to have a break, and I’ve been offered to do Hollywood films since I made The Orphanage, and I’ve always said no. But the fact that it was Steven Spielberg behind it—I thought I really wanted to try that. I’d always been a huge fan of Spielberg.

Is it gonna be as much fun as the first one, on that kind of a big scale?

JAB: Yeah, I think so. It’s massive. It’s even bigger than the first one. MM

A Monster Calls is currently in limited theaters, and expands nationwide on January 6, 2017, courtesy of Focus Features.

Laughing With Pain: Director Maren Ade and Sandra Hüller on Their Hilarious Father-Daughter Dramedy Toni Erdmann
Getting A+ VFX: How Top-Notch Visual Effects Can Make Your Indie Feature Dazzling