In case you’ve forgotten, sometimes movies can just be about fun.

Welcome to the 25 Coolest Film Festivals in the World. A companion list to our definitive “50 Film Festivals Worth the Entry Fee” list released in spring, “Coolest Fests” is where things get a little looser, a little funkier, a little weirder. Think of it this way: While that list is all about bang for moviemaking bucks, this list is, simply, about having the best time at a festival imaginable—whether that means incredible atmosphere, superb repertory programming or choice victuals.

And yes, one moviemaker’s “cool” is another’s “I didn’t get to see any films, I was rolling my eyes so hard”—so that’s why we ask a broad, certified-hip panel of film festival veterans to nominate their circuit favorites, then present the top of the crop. These fine folk have logged Academy Awards, national theater franchises, and lots of mescal—sorry, moviemaking—between them. They’ll show you the way.

Every year, before we receive the nominations, we think we’ve seen it all… and while, yes, there are a handful of repeat offender fests in the following line-up, we never fail to learn about at least a few events we’ve never heard of, but are immediately desperate to attend. Some other findings this year: The beach is where everyone wants to be. Florida is getting cooler than ever. If you’re a genre nut, you better speak Spanish. And, finally, coolness can be found anywhere in the world (yes, even New Jersey!). So go out, make some memories, and tell us about them next year.

Steven Caple Jr.’s feature film directorial debut, The Land, was released in theaters July 29, 2016 by IFC Films. Previously, he made HBO-airing short film “A Different Tree,” amongst others, and was selected to direct a one-act stage comedy for the HBO Character and Scene Studio.

Brady Corbet is an actor and moviemaker who has appeared in films such as Melancholia, Funny Games, Simon Killer, Eden, While We’re Young and Force Majeure. His feature directorial debut, The Childhood of a Leader, was released in theaters July 22, 2016 by IFC Films.

Tim League and wife Karrie founded the Alamo Drafthouse Cinema in Austin in 1997 (these days it is expanding to L.A., San Francisco and Brooklyn, with more locations on the horizon). League also co-founded Fantastic Fest, the largest genre film festival in the U.S., and launched distribution label Drafthouse Films.

Emily Lu Aldrich is a festival and awards-film publicity consultant based in Los Angeles. She spent the last four years as the director of national publicity for Strategy PR/Consulting, and worked on campaigns for films such as Boyhood, The End of the Tour and Drinking Buddies.

Amanda Salazar is the vice president of film acquisitions at subscription streaming service Fandor. She is also a musician, a programmer and the co-founder of the newly reconstituted Camera Obscura film society in Petaluma, CA.

“It’s obviously niche—someone on the project has to be black,” says a panelist. “But the turnout is very diverse, plus you get to watch movies and hang out by the water in South Beach!” ABFF celebrated the two-decade mark this summer with attending luminaries such as Nate Parker, Gabrielle Union and Common (the 2016 fest ambassador). High-level industry attendance and sponsorship have made ABFF launching pad for talent—for example, “HBO have an awesome short film contest,” says our panelist, “where the shorts get bought by HBO and placed on HBO NOW and HBO GO.”

Sure, Ashland is best-known for its long-running Shakespeare Festival, but AIFF isn’t mired in tradition. The 15-year-old fest has recently taken steps to broaden its range, with dives into live cinema, art installations and interactive media offerings, plus a new category called BEYOND which this year showcased Celia Rowlson-Hall’s dance-driven narrative Ma, amongst other titles. Even so, the festival hasn’t lost any of its particular Southern Oregon charms—it’s still “such a down-to-earth exhibition of talented filmmaking,” says a panelist. “It treats filmmakers with so much respect.”

You may (or may not, actually) have heard about the homemade theme park, the fake Criterion release party, the machete fights, the mushrooms. Before the BFF’s long-awaited 10th edition (it’s a biannual affair), why not whet your palate a little more? “For one week,” says a panelist, “Borscht rules Miami. [Filmmaking group] The Borscht Corp. produces films, TV content, online content, fine art, new media, art residencies and film grant competitions—and at their film festival, they highlight their accomplishments and then sit around the beach at 2 a.m., talking. I loved the workshops, bike-beer crawl, huge outdoor screenings, and the beautiful Miami sunsets in winter.”

This best-of-the-best cinematography festival welcomes a full armada of the world’s visual masters—seriously, everyone attends. “Camerimage is one of the greatest honors to be selected for—especially for your cinematographer, of course,” says a panelist. “The excitement surrounding cinephilia there is palpable.” Continuing Poland’s strong reputation for film education, the fest dedicates substantial space to masterclasses for students (young and old, local and international) who relish the chance to talk shop, then party late into the night, with their heroes.

An Arri workshop with the Helicopter Girls at Camerimage 2015. Photograph by Marcin Mięsak

The seaside resort town of Deauville in Normandy is one of the more idyllic hotbeds for American cinematic talent you’ll find. The 41-year-old fest hosts an impeccably chosen annual collection of top U.S. indies—last year’s titles ranged from Marielle Heller’s The Diary of a Teenage Girl to Terrence Malick’s Knight of Cups. There’s serious star-power, to be sure, yet as one panelist recalls, “no film or filmmaker was held in a higher regard than another.” Still, an appearance at Deauville is a signal that you’ve made it. Says our alum, “I would go again in a heartbeat.”

“Everything about it is a huge highlight in my memory, filled with joy,” raves a panelist. Considering the chops DOC NYC displays these days (it’s billed as America’s largest documentary festival, after all), it may surprise that it’s only 7 years old. And while uniting the field’s brightest (Wiseman, Oppenheimer, Polley, Gibney, Poitras, etc.) in Downtown Manhattan for eight days is cool enough, fest personnel aren’t stopping there: Artistic Director Thom Powers hosts a doc-focused podcast called Pure Nonfiction, and he and Executive Director Raphaela Neihausen run weekly screening series Stranger Than Fiction at IFC Center.

Hitchcock/Truffaut by Kent Jones was a documentary selection at DOC NYC 2015. Photograph by Philippe Halsman; courtesy of Cohen Media Group

Far be it for us to run this list without including “Coolest” all-star Fantastic Fest, which explodes genre onto the streets of Austin every fall. Beyond the high-profile premieres and secret screenings, “the activities scheduled around the fest are the most fun,” says a panelist. “I look forward to checking out the ‘Fantastic Debates’ boxing match each year.” Another adds, “I would like to highlight the Mercado Fantastico, or Fantastic Market, lead by the amazing Rodney Perkins”—the industry gathering and pitch event (with a special emphasis on Latin American or Ibero-American films) that takes place during the fest’s first week. 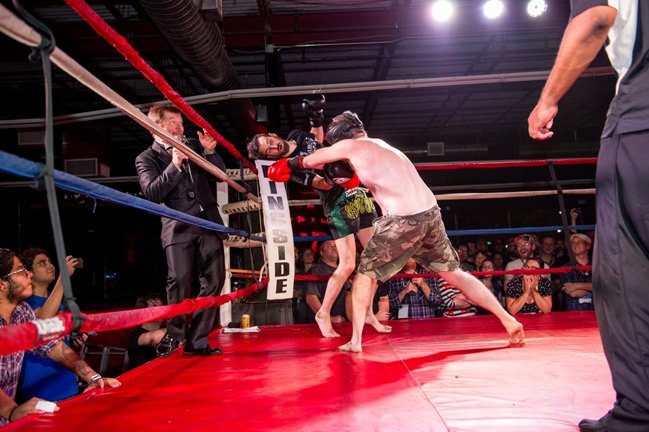 Fantastic Fest’s debate-come-boxing matches are the stuff of “you had to be there” legend. Photograph by David Hill

GIFF unfolds in two cities in the Mexican state of Guanajuato: the first half in UNESCO World Heritage Site San Miguel de Allende, and the second in Guanajuato City. We’ll let our panelist elaborate: “Highlights include free screenings in graveyards and in caves among mummies, giant outdoor screenings, parades for guests, and a wonderful showcase of world cinema that honors one country per year. Not to mention all the delicious Mexican food and never-ending flow of tequila! I was lucky to be present for the year Japan was the spotlight country, and got to drink mescal with cinema greats like Nobuhiko Obayashi and Kaori Mamoi.”

Do you need one more reason to go to Cuba? Also known in English as the International Festival of the New Latin American Film in Havana, Havana Film Festival has a focus on top Spanish-language films, though it has also featured an international selection since its inception in 1979. One panelist recalls the thrill of an early iteration of the fest, which has a tradition of giving voices to the marginalized: “There were filmmakers coming from all over the world to screen films that were considered controversial in their own countries.” With multiple translations occurring at once, “it was so refreshing to hear everyone laugh at the same time.”