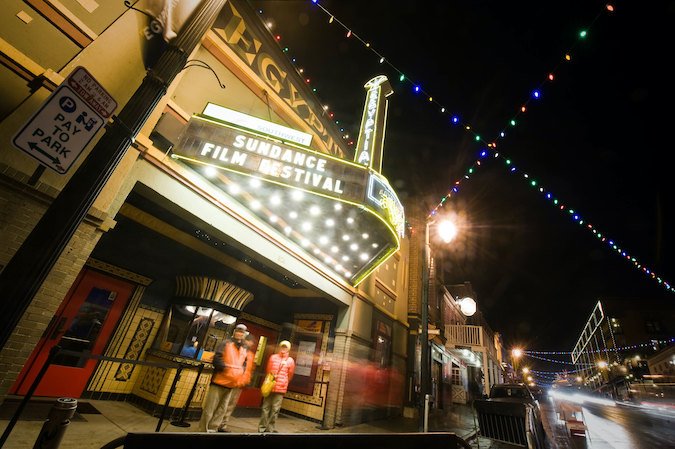 Since this year’s Sundance awards winners were announced via a virtual ceremony, with pre-recorded clips, there was a certain charm in seeing all of these moviemakers accept the awards at home or during chores. Grand Jury prize winner Ahmir “Questlove” Thompson was headed to work in a car stuck in traffic when he recorded his messages. All Light, Everywhere director Theo Anthony was taking his dog out for a walk in snowy Baltimore. Virtual festgoers got a nice personalized window into their lives.

Next up, Sundance film festival director Tabitha Jackson thanked the filmmakers, Sundance staff and all of the volunteers working virtually this year out of 13 states, Canada (“They’re the polite ones” Jackson joked), and the U.K. (“They’re the well-spoken ones,” she added.)

Patton Oswalt hosted from what looked like a personal theater. He took a playful jab at Slamdance, joking that after this he was hosting their awards show on the wifi they were stealing from Sundance. He had a single recurring bit of pretending to talk to someone seated next to him off screen. Lines like “I was naked, Soderbergh was naked,” might have worked had they not gotten lost amidst a hundred others of the same ilk.

Below are a complete list of winners from all of the Jury and Audience Awards from this year’s Sundance 2021:

CODA, which made noise earlier in the festival when Apple shelled out a record $25 million for the rights to the film, was the big winner, taking home four awards, including U.S. Grand Jury Prize: Dramatic.

Other notable multi-award winners include Summer of Soul (…Or, When the Revolution Could Not Be Televised), Hive, and Writing With Fire.

NEXT Audience Award for – Ma Belle, My Beauty – Marion Hill

Also read: Sundance Survey: Moviemakers Give Us an Inside Look at 19 Sundance Films

Audience Award: U.S. Documentary – Summer of Soul (…Or, When the Revolution Could Not Be Televised) – Ahmir “Questlove” Thompson

U.S. Grand Jury Prize: Documentary – Summer of Soul (…Or, When the Revolution Could Not Be Televised) – Ahmir “Questlove” Thompson