10 Tips for Making a Low-Budget Movie in the Woods 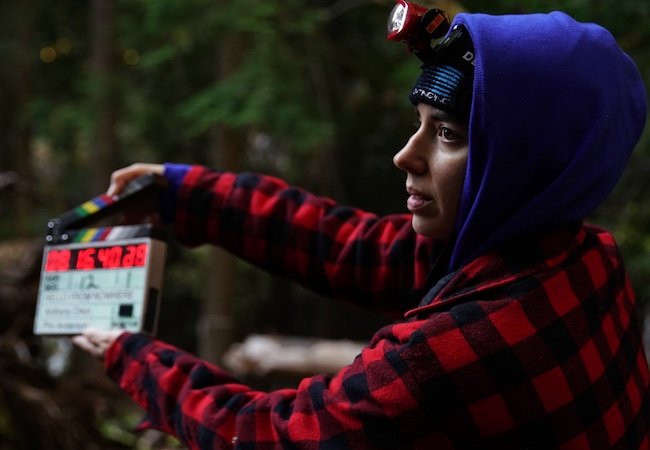 Writer-director-editor Anthony Orkin is a Portland, Oregon-based filmmaker. His first feature, Personal Sergeant, was distributed by Marvista Entertainment. In this piece, he shares what he learned shooting his second feature, Hello From Nowhere.

When I told my wife I wanted to make my second feature, she wisely challenged me to write the cheapest feature I could.

“I’ll have a small cast,” I said to myself, “five people. And I’ll set it in the woods! We’re in Oregon. Oregon has lots of woods, so that should be cheap, right?”

What was I thinking?

After reading the script for my farce/thriller Hello From Nowhere, my producers — Lara Cuddy, Alyssa Roehrenbeck and Todd Robinson — gently introduced me to the logistical and budgetary realities of feature filmmaking in the Great Outdoors. Here are some tips I learned from them, and from the shoot itself, when we made Hello From Nowhere on the slopes of Mount Hood.

1. Don’t Shoot in the Woods. Shoot next to the woods. I started out wanting to make a Dogme 95 film, where we all slept in tents and shot with natural light. Then we did the location scout, and I became familiar with the pleasures of a pit toilet. Some sacrifices are too great.

2. Don’t Shoot Near a Town. There are trees, right? And bathrooms! How many trees do you really need? Our D.P., Phil Anderson, pointed out that half our scenes could have been shot with the greenery in a grocery store parking lot. But the problem is sound: cars, planes, pedestrians. We scouted more than two dozen lakes, and the more accessible they were, the louder they were. So unless you’re making a silent movie…

3. Shoot in a Resort or a Camp. Some place with acres and acres of private property, which means you won’t have any elk hunters tromping through your shot. Plus you’ll have a restaurant-size kitchen, hot water, beds, etc. We scoured Oregon’s Google Maps, and discovered Camp Baldwin, a Boy Scout camp on Mount Hood. It was the sweet spot: remote enough to look and sound wild, yet just close enough to civilization for one modem to work. Every day, after shooting, folks would crowd into the office and check their phones. It got very cozy in there.

4. Rent Just Slightly Off-Season. Spring or fall, usually — right before school lets out, or right after. Too far outside those dates, and you’ll run into bad weather. You want to shoot in that brief interval between the summer/winter vacation crowds (when you’ll never be able to afford your location) and the rain. This means planning! We picked our camp in August, then shot in September, thirteen months later. This way, we were able to scout our location in roughly the same season we shot. We got great fall colors in September, by the way.

5. Minimize the Hump. So now you’ve got this beautiful outdoor location. It’s got peaks, gullies, meadows, a cornucopia of beautiful vistas. How many of them are within fifty feet of a road? It can be a gravel road, but it can’t be so pitted that a gear truck can’t get up there. And once the gear truck is parked, about a thousand pounds of gear will have to be humped through the grass/trees/rocks to this pretty spot you’ve picked out. And your crew will be looking at you, dagger-eyed. Ansel Adams did his greatest work by the side of the road; do yours there, too. 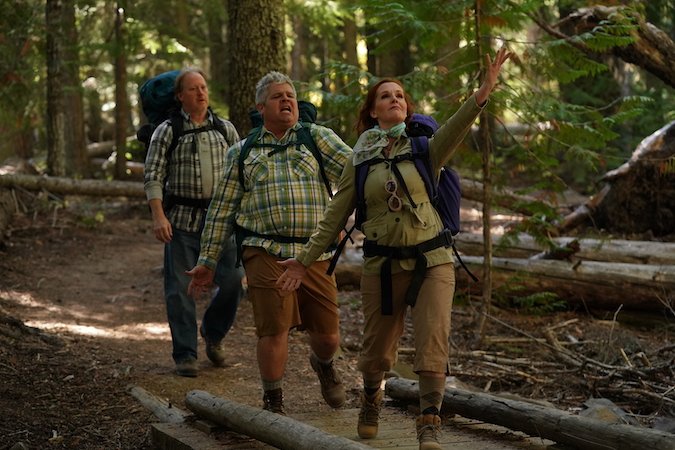 6. Prepare for Weather. In the whole two weeks we shot, we got one night of rain. The crew just put on their ponchos and kept going like it wasn’t even there. A plastic tarp appeared over my head. Oregon crews know how to handle rain. Same thing with heat; it got down to the forties at night, and we had about six nights of dusk-to-dawn shooting. Out would come Mr. Heater, and we’d crowd around it between takes, and drink hot tea. Cozy, once again.

7. Bring Extra Craft Services. No matter how comfortable you make things, outdoor filmmaking is harder work than indoor. If you’re at high altitude, that burns extra calories, so the normal crafty isn’t enough. You’ll need extra power bars, bagels, water, and of course caffeine. Our P.A., Pete Fitz, was a beast of burden, hauling his wagon of goodies up narrow hiking trails. Thanks, Pete!

8. Consider Post-Production Fixes. Got an outhouse in the corner of your scenic vista? Take it out in post. Can’t afford enough lights for your night shots? Shoot at twilight, then color it night in post. Hello From Nowhere isn’t science fiction, yet it has thirty-two effects shots. That was me, in After Effects, for several months, folks. Then my master colorist, Chris Hackett, spent many more months adding masks and adjustments, to get the smooth day-to-night transition the script required.

9. Embrace the Cutting Edge. You’ll be using literally tons of equipment in a rugged, inaccessible place. Production equipment is constantly evolving, so you need to find the latest, most miniaturized version of everything. In the words of our D.P., Hello From Nowhere “experimented with using large battery stations from Lion Energy and Stanley. The stations, in combination with LED lighting, gave us the ability to shoot in the middle of the woods at night without having to run hundreds of yards of cable, in order to get traditional power-plants far enough away to keep sound happy.” And it worked! I’m just glad I didn’t know beforehand about what a chance we were taking.

10. Bring Treats. Small comforts mean so much more in the woods: Tall Pawl brought his hot sauce. Brian Mazzola brought his trumpet; during the night shoots, he’d play “Reveille” at sundown and “Taps” at dawn. There were several guitars, and jamborees by campfires, when we weren’t shooting. Singing in the woods, just like the story of Hello From Nowhere. Hmm, maybe this shoot was more Dogme than I thought.

You can also check out short films by Anthony Orkin, such as “Sammy’s Measle”, “The Neighbor Hood” and “Stargazer,” by clicking their titles.

How Mark, Mary and Some Other People Embodies the 20-Something Experience
Felicity Jones Only Gets Love Letters (Cover Story)