007 Gets 002 Thumbs Up; What Licorice Pizza Means; In Praise of Body-Swap Movies 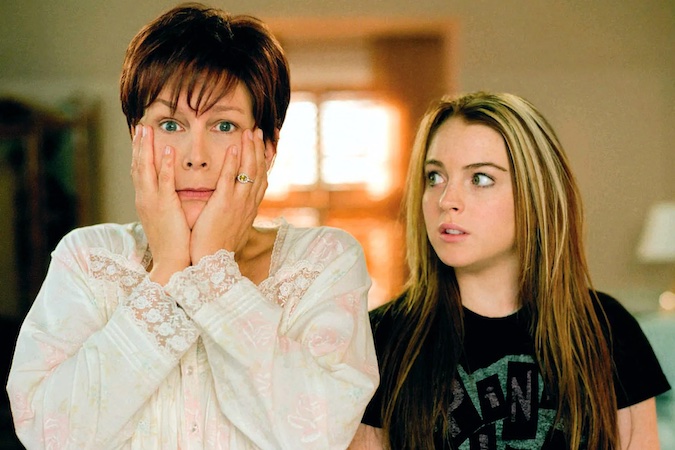 A WarnerMedia mistake; good reviews for the new James Bond film No Time to Die; in praise of body-swap movies; thanks to the readers who explained the title of the new Paul Thomas Anderson movie, Licorice Pizza. All in today’s Movie News Rundown.

But First: If you enjoy this newsletter you can sign up to receive it daily here.

Kilar: WarnerMedia CEO Jason Kilar concedes that he should have spent more time talking to the filmmakers involved about his decision to release all 17 Warner Bros. films this year simultaneously on HBO Max and in theaters. The decision upset people like Dune director Denis Villeneuve and Many Saints of Newark writer-producer David Chase. Here’s The Hollywood Reporter‘s J. Clara Chan with a great writeup of his comments. Variety notes that Kilar is leaving soon.

Bond Reviews: They’re good! No Time to Die has a 90 on Rotten Tomatoes. There are some complaints that it’s a little long at two hours and 45 minutes — we should bring back intermissions, they were great — but the final Daniel Craig 007 film is generally well-liked. I’m most intrigued by an observation from The Playlist critic Robert Daniels about the film’s ending, but since it could be considered a mild spoiler I’ll just leave this link to the review here.

Why It Matters More Than Usual: You may recall that No Time to Die was one of the first major films to be delayed by the pandemic. The Cary Fukunaga film is also one of the big bets for getting audiences back into theaters. It’s out next Friday, Oct. 8.

What Did Roger Moore Think of It, Though? Film critic Roger Moore reviewed the film without once mentioning that he shares a name with the third actor to play Bond. That must have required Bond-like restraint and Mr. Moore should be commended. Roger Moore gives No Time to Die three our of four stars, and says it is a “graceful exit” for Daniel Craig. He also says 1969’s On Her Majesty’s Secret Service, starring Bond No. 2 George Lazenby, is “perhaps the most underrated film of the lot.” Extra integrity points for not showing favoritism to one of the films starring his namesake, who died in 2017.

Hm: I’m hoping to rewatch On Her Majesty’s Secret Service soon, in part because of Diana Rigg, who is also excellent in the upcoming Edgar Wright film Last Night in Soho, her final role.

Rotten Tomatoes, Really? I don’t like judging a movie by an aggregated score, because we all have movies we passionately love that critics, perhaps on tight deadlines, didn’t have time to process and appreciate. But I do like using Rotten Tomatoes to look for reviews that seem thoughtful.

Cool Customers: A huge thanks to the readers who generously took time to explain, kindly, why the new Paul Thomas Anderson movie Licorice Pizza is called Licorice Pizza. (I admitted yesterday I was clueless about the origin of the name.) Gail Worley was the first to comment: “Licorice Pizza was the name of a southern California record store chain in the ’70s and early ’80s.” Tom Peterson adds that it was a “famous record store, made more so because my sister-in-law worked there. She’s no one you would know, unless you worked there, too.” And Don Malcolm won me over immediately with his opening line, since the internet usually makes me feel old: “I’m guessing that you are too young to remember a record store chain called Licorice Pizza that was all around Los Angeles in the 1970s-80s. I’m also guessing I’m not the first person to write and tell you this! Of course, you are 100% right about the food images conjured up by the name—it was so gross that some folks boycotted the store on general principles!” It sounds like Licorice Pizza attracted a very nice and cool clientele.

Okay, But How Did the Record Store Name Itself Licorice Pizza? It’s from a self-deprecating joke by the comedy-folk duo Bud and Travis, who joke around the 9:30 mark of this video that one of their vinyl records is so unsuccessful that it’s being marketed as “licorice pizza” — since records are black and round.

What Happened to Licorice Pizza: As I learned yesterday from Los Angeles Magazine, the owners of Licorice Pizza, James and Patti Greenwood, sold off the chain to a company called Record Bar in 1985, and Record Bar was then sold to Musicland, which later rebranded as Sam Goody. I was always more of a Music Plus guy.

P.S.: If you’re as fascinated as many of us are with Los Angeles in the early 1980s, I highly recommend checking out the new Bret Easton Ellis story The Shards, which he released exclusively through his podcast. You can sign up now and listen to all of the episodes while they’re still there. Its high-school-serial-killer storyline takes us from Malibu beach clubs to the Sherman Oaks Galleria to football fields and near-empty houses in the canyons, as the Bret Easton Ellis character seeks solace in films and a wash of ’80s music. This tweet today from Spree director Eugene Kotlyarenko reminded me how much I’ve enjoyed The Shards over the last year.

Just listened to the last 45 mins of @BretEastonEllis The Shards half asleep in the dark. It made me extremely emotional and reflective and now it’s time for bed. The experience of listening to Bret read this book throughout the Pandemic was very special and won’t be forgotten.

Body Swap: I enjoyed this Screen Crush essay by Matt Singer arguing that while critics may hate body-swap movies like Vice Versa and Like Father, Like Son, the body-switch genre is in some ways a perfect distillation of cinema because it invites us to empathize completely with another person for a few engaging hours. And it’s fun to watch Lindsay Lohan and Jamie Lee Curtis play each other.

The Boy Who Magically Switched Places With His Dad: Here’s a powerful clip from The Ben Stiller Show.

Main image: Lindsay Lohan (L) and Jamie Lee Curtis in 2003’s Freaky Friday remake, which has an 88 on Rotten Tomatoes, which is especially good for a body-swap movie. Oh shoot, correction: that’s Jamie Lee Curtis on the left.