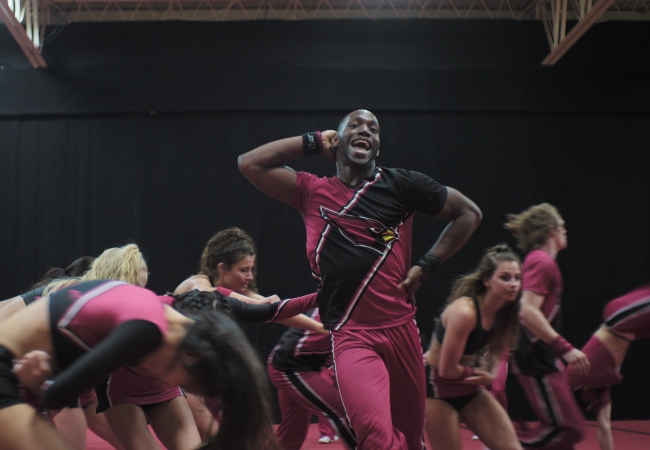 “Navarro is incredibly interesting. I think Monica is the type of person that you could film forever, and she’ll have a new cast of interesting characters every year that she’s going to be coaching,” Whiteley told MovieMaker ahead of Cheer’s season two premiere on Wednesday.

“That said, whenever you’re making a show, one of the great opportunities that you have is to introduce the audience to a world that they’re not familiar with.”

Season 2 introduces us to new characters like Vontae Johnson, the head coach of Trinity Valley’s cheer team whose mission is to best Navarro — and his rival head coach, Aldama — at the year’s ultimate showdown: the National Cheer Association’s College National Championship in Daytona Beach, Florida.

“With Navarro, even though we’ve been there before, there’s been some turnover on the team, so there are some new cheerleaders that it’s important to get to know. And then Trinity Valley is a whole brand new world including explaining the town, its proximity to Navarro, their coaches, their backstories, their cheerleading team,” Whiteley said.

“People now know Corsicana, to a degree. They know Navarro College and they know Monica. And so I think it just is helpful to have new people and a new world that you can introduce to, especially if they’re so closely related to the original world that you’re set to document primarily.”

The Batman Is Rated PG-13, and Some Fans Are Surprised — Others, Not At All
Matthew Heineman’s The First Wave Doc Depoliticizes the Pandemic: ‘There’s No Trump in My Film’ (Video)