Who Can Tell What Story?; Bill Maher on Matt Damon; Don’t Take the Bait 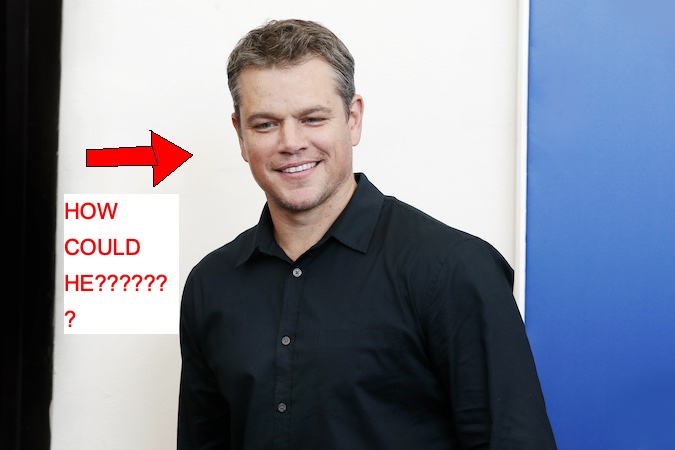 Bill Maher defends Matt Damon, Johnny Depp feels ostracized, who can tell what story, and some thoughts on clickbait. All in today’s Movie News Rundown.

Johnny Depp: The actor tells the The Times of London that he’s being “boycotted by Hollywood” since losing his libel case last year against the publisher of The Sun over an article that described him as a “wife beater.”

Box Office: Free Guy, starring Ryan Reynolds, beat expectations by taking in $28.4 million at the weekend domestic box office, Variety reports. That’s slightly better than the $26 million that The Suicide Squad earned in its theatrical debut last weekend while it was also available for home viewing via HBO Max. Free Guy was only in theaters. As you may have heard, the pandemic is not helping the whole theatrical-attendance situation.

Today’s Main Image: As I was wrapping up today’s newsletter, my visiting friend Tim Jacobs’ young son, Matīss Jacobs, age 11, asked what I was writing. When I explained, he advised: “Put a very clickbait image.” I asked what he meant. “Red arrows, a big circle, and put words like ‘insane’ around it,” he explained. I told him I didn’t know how to do that, and he tried to show me, but I ended up just handing over my laptop. So today’s main image is brought you by Matīss Jacobs, who also came up with the terrific “How could he????”

What About Child Labor Laws Though: We gave him both pizza and donuts.

The Outsider: There’s a lot of debate lately about who has the right to tell what story, and I think this interview with CODA writer-director Siân Heder may be helpful to that debate. She made a movie about musicians, people in the Deaf community, and the insular fishing town of Gloucester, Massachusetts without belonging to any of those very specific cultures, to near universal acclaim. She did it by researching intensely, seeking out real participation from the people she portrayed onscreen, and heeding the mantra of the Deaf community and many other marginalized groups: “Nothing About Us Without Us.” I like her approach a lot.

Bill Maher on Matt Damon: The Real Time host went all in on the Twitter scolds who have gone all in on Matt Damon many times over the years, making the increasingly familiar point that no one is “woke” enough for the so-called “woke” police.( I put “woke” in quotes because The Associated Press Stylebook designates that you should put quotes around words you think are silly.)

Don’t Take the Bait: Maher’s thing is amusing enough but I respectfully submit that “woke” outrage and outrage over “woke” outrage are equally hack and tiresome and not worth anyone’s time. Stop using your free speech to complain constantly that you don’t have free speech and instead use it to make something beautiful, shocking, or just because you can. Don’t waste an instant of your intellect or energy worrying about what anyone else said. You can have a greater impact with your films, songs, novels and especially your sculptures made of trash — which are a stunning critique of our rampant consumerism in a time of sweeping modernity, great job! But refuse to fuel the outrage machine.

Full Disclosure: If nothing else stops you from overreacting to every dumb thing on Twitter, please know that I, a smug middle-aged white man, own some Twitter stock and use the meager profit I yield from your outrage to buy fancy iced creams.

This Is How We Do It: See, I’m not even going to touch this fake Shang-Chi “controversy” about an actor interpreting a boring comment by an executive in the most negative way possible in hopes of selling tickets to the movie, and in so doing enriching both himself and executive. The joke’s on you, actor: I was already going to go see Shang-Chi.

Lousiana Film Prize: Our friends at the Louisiana Film Prize, which awards a $25,000 prize to a short film shot in Louisiana, just named their 20 finalists for this year’s competition. If you want to know more about the festival, again, this fun conversation with festival founder Gregory Kallenberg is a great place to start.

Comment of the Day: “The trailer for Wild Indian looks intense and fantastic, writes Todd Schoenberger in reference to the trailer at the end of Friday’s Rundown. “It does have one thing that annoys me more each passing day, the high-pitched ringing to signify disorientation. The first time I heard that I thought it was great, but it has suffered from extreme over-use. I think we can give that audio trope a bit of a rest now.”

Two Things: I didn’t notice the high-pitched ringing in the trailer and I’m pretty sure it isn’t in the movie, but Todd is very right about this being a trope. The audio trope I’m most tired of is the slowed-down, mournful version of a once-cool song, as deservedly mocked here. Audio tropes I love: when Chris Nolan adds ticking clocks and the sound of shaking out a wet beach towel.