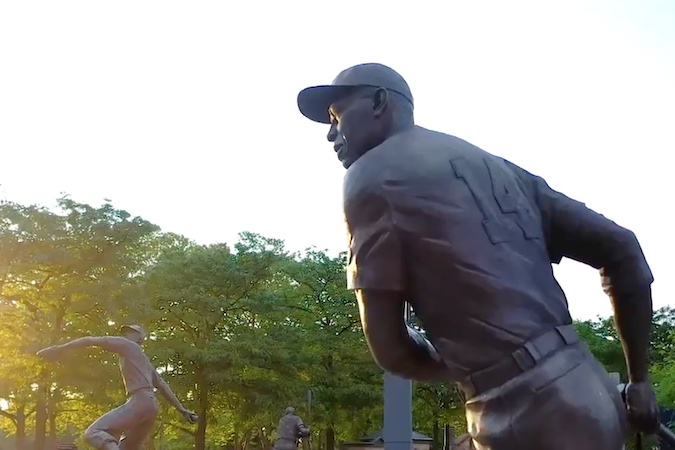 Things That Are Out Today: Snake Eyes and M. Night Shyamalan’s Old are in theaters, the new season of Ted Lasso is on Apple TV+, and Last Letter From Your Lover is on Netflix. Here’s our cover story on Last Letter for Your Lover’s Felicity Jones, who stars in the cross-time love story with Shailene Woodley.

Together, we are all… pic.twitter.com/R5FnT4kv1I

Why Tom Hanks, You Ask? Born in California, Hanks came into his own as an actor in Cleveland, where he worked for three years at the Great Lakes Theater Festival and won Best Actor from the Cleveland Critics Circle in 1978. I like to imagine that when he received the award, the mayor of Cleveland took him aside and said that one day he would be called upon to provide a service for the city, and that with the video above, Tom Hanks has finally paid his debt.

Cousins: Sophie Martinez has this terrific interview with the directors of the new Cousins, about three Māori girls and their intertwining lives. (The Māori are the indigenous people of New Zealand.) Sophie writes: “To watch Cousins is to experience a Māori worldview, free of imposition from a non-indigenous perspective.” If you refuse to take our word for it that Cousins is good, it’s also a New York Times‘ Critics Pick, so you probably feel very silly now.

Sean Penn: Penn is refusing to return to work on the Starz Watergate series Gaslit — in which he stars with Julia Roberts — until all cast and crew receive the COVID-19 vaccine, Deadline exclusively reports. Given that L.A. has reimposed indoor masks due to the surging Delta variant, Penn has also offered to lead the vaccination effort through his organization, CORE. Deadline additionally notes that Gaslight’s studio, NBCUniversal, has mandated that everyone working in Zone A on productions be vaxxed, after studios and unions agreed that producers could make vaccinations mandatory in Zone A, which refers to the zone where people have the most intimidate contact, often unmasked.

Or to Put It Real Simple Like: No vaccinations means no kissing, wrassling or working with beloved Oscar winners Sean Penn and Julia Roberts.

Fantasia! Montreal’s beloved Fantasia International Film Festival, one of our 50 Film Festivals Worth the Entry Fee and one of our 50 Best Genre Festivals, has just announced its third and final wave of films and events for its 25th edition. It will close with Takashi Miike’s The Great Yokai War — Guardians, which is not about Cleveland’s baseball team. Rather, it is a sequel to The Great Yokai War, which opened Fantasia in 2006. Per Fantasia, it “plunges the audience into the fairy-tale world of friendly Japanese demons that overflows with creativity. With its kaiju references, unifying story, festive atmosphere, love for popular culture, and spectacular direction from the festival’s favourite filmmaker, it’s the perfect movie to close out this 25th anniversary.” Other film just announced include Vincent Grashaw’s Southern Gothic What Josiah Saw, about an estranged family dealing with the grisly sins of the past. You can learn more at Fantasia’s website.

Theatrical Windows: I was in an actual movie theater yesterday seeing something excellent I’m not allowed to talk about, and while there I noticed that almost every poster in the lobby was for a movie that will also be on HBO Max. And of course Marvel’s Black Widow made summer’s biggest debut in theaters and Disney+ on the same day. How to keep track of what’s being released in theaters and what’s available at home? IndieWire has compiled this helpful guide to how the different Hollywood studios are handling theatrical windows.

Wait for It: Variety also says that Legendary, the company behind Godzilla vs. Kong and the upcoming Dune, has had discussions about selling an equity stake or potentially merging with another business.

Comment of the Day: “Very inspiring!” says Nerd Reactor (we checked and this is their legal name) commenting on this interview with Zola writer Jeremy O. Harris, who went from rejection to writing for himself and earning a record-breaking 12 Tony Nominations for his acclaimed Slave Play. Here is the interview just in case you didn’t watch earlier this week. Also, keep an eye on the career of interviewer Lowam Eyasu, a fantastic, funny writer currently making her debut film with StudioFest. Watch: