The Half of It is a kind of modern-day teenage Cyrano story, about young people eager to connect. In the latest MovieMaker Interviews podcast, Eric Steuer asked the director of the Netflix hit how she feels about the algorithms that steer streaming viewers to some films and not others.

He noted that her film — which is focused on a young, gay Chinese-American woman — might not be something Netflix would recommend for him — but that he nonetheless deeply enjoyed the film. (You can listen to the full conversation on Apple or Spotify or above.)

Wu is more tech-savvy than the average filmmaker. Besides growing up in Silicon Valley before its boom, she began attending MIT at age 16, and studied computer science.

“Algorithms are really just a computer’s way of sorting data sets, right? That’s literally all it is. And that doesn’t mean that interesting things can’t emerge,” she says.

“I’m guessing the way Netflix does their algorithm is like, they’ve seen that you love Chinatown, and you also love Ferris Bueller, and you also love, I don’t know, Children of Men. And they look at me like, ‘Oh, Alice also loves those three things. And also, Alice loves Ladybird.'”

Using your previous selections to choose others you might like, she says, is better than saying, “Here’s everything, go find it yourself.'”

That said, algorithms also cut out the one-on-one conversations that used to be so important to choosing what to watch.

“As a people, we seem to have lost the art of communication and conversation,” she says. “This is a slight tangent, but it’s something I actually feel very strongly about. It used to be the information for me was like a currency of intimacy. Meaning if knew a lot about you, the only way I’d know a lot about you is if you told me. You told me where you grew up, you told me who you’re in love with, you told me what you like to eat. Not because I Facebook stalked you and read up on what you tweeted. 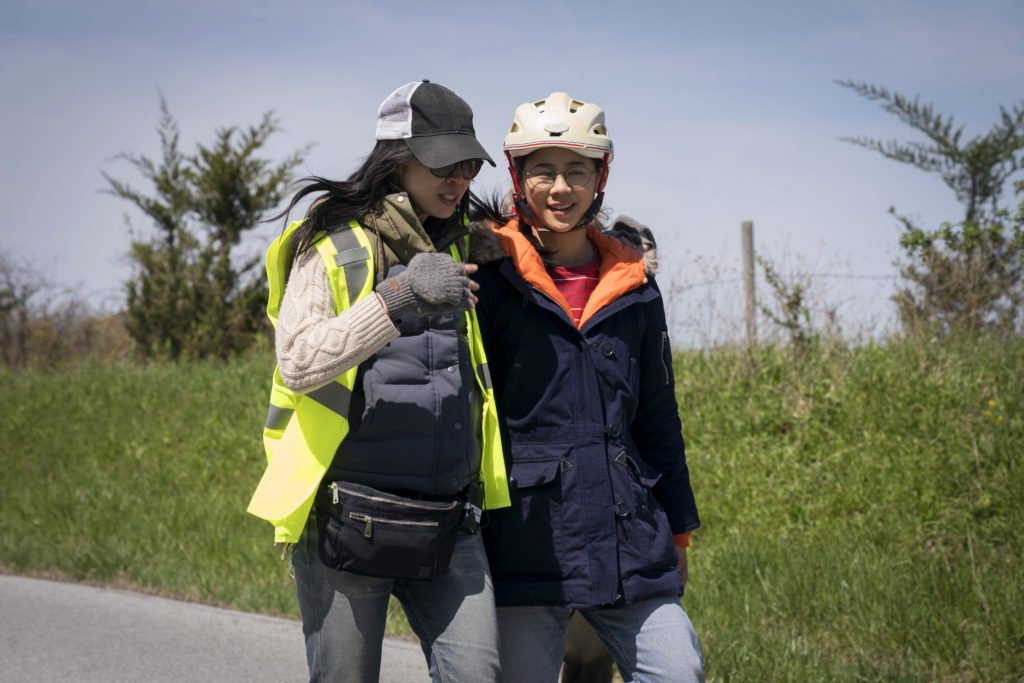 The Half Of It director Alice Wu (L) and Leah Lewis. Main image, above: Lewis, Wu and Daniel Diemer on the set of The Half of It. Photos by KC Bailey, courtesy of Netflix.

“Now I know all this stuff about you, but you and I have never met, right? We have turned into a nation of broadcasters,” she continues. “And what you lose there is is the interaction, right? And I’m hoping somewhere in all of this sort of circle back around is that some point maybe people are gonna realize, like, Look, it’s not, it’s not about how much you know, or them being able to find the perfect movie you’re gonna see based on all the data.

“There’s also something to be said for the kind of connection you get when a friend says to you, ‘Hey, you know, you might like this,’ because that shows that they know something about you.”

She adds: “As a computer scientist, I’ve always weirdly also been a bit of a humanist or a bit of a Luddite. … Honestly, the only point I think of being human is connecting with other people.”

The Half of It has earned the kind of intense fan following you can’t generate through an algorithm, as the abundance of online The Half of It fan art illustrates. Wu talks on the podcast about her feelings on that art, how she chose the music for the film, and the years she spent going to a Mormon church without being Mormon. It’s wide-ranging talk that proves human haven’t lost the art of conversation just yet.

The Half Of It, directed by Alice Wu, is now streaming on Netflix. If you like it, recommend it to a friend.

The AD of the Pandemic Film Don’t Fear on the COVID-19 Protocols Here to Stay
Michael Moore to Joe Biden: Abolish the Electoral College, Give Us Ice Cream