Succession Behind the Scenes; Matthew Modine v. Fran Drescher; R.I.P. Ed Asner; What If and Schmigadoon Are Fun 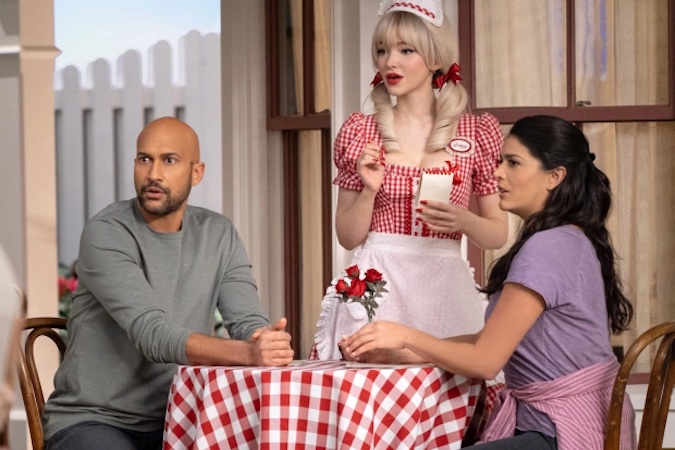 What Succession Season 3 won’t be about; Matthew Modine and Fran Drescher face off, dramatically, for the SAG-AFTRA presidency; Rest In Peace, Ed Asner; we’re enjoying What If and Schmigadoon. All in today’s Movie News Rundown.

What Succession Season 3 Won’t Be About: Creator Jesse Armstrong decided early on that the season wouldn’t focus on COVID-19. “These are really wealthy people,” star Sarah Snook told Vulture. “And unfortunately, none of the world’s really wealthy people were going to be affected by the pandemic.” The Succession cast was: In March 2020, Mark Blum, who played executive Bill Lockhart, died of COVID-19 complications. And stars Alan Ruck and Brian Cox also contracted the virus, Harris writes.

Sweet: Nia DaCosta’s Candyman earned an impressive $22.37 at the weekend box office, claiming the top spot on a weekend suppressed by the Delta variant and Ida. IndieWire notes that it “appears to be the first #1 film from a Black female director.” Congratulations to Nia DaCosta and everyone involved.

Males 18-34: The Hollywood Reporter notes that the film “attracted an audience that was over half male and 69 percent of which were in the 18 to 34-year-old age bracket.” It also notes that this demo — men 18 to 34 — have been most likely to go to movies during in the pandemic. I did not know that and am kind of surprised.

Hooray: Indie filmmaker Lucas McNelly, who wrote this honest, moving piece for us about the long struggle to finish a film while dealing with depression, is happy to announce that his new film, Maine Noir, hit its Seed&Spark crowdfunding goal last week. Some of the people reading this helped make it happen — way to go, everyone! It’s awesome to see a success story.

Matthew Modine v. Fran Drescher: The Wall Street Journal has this piece on the state of the SAG-AFTRA election, in which Matthew Modine (Full Metal Jacket) and Fran Drescher are running for president. Actors’ endorsements are meaningless in normal elections, but what about elections where everyone involved is an actor? “Ms. Drescher, 63, was endorsed by actors including Tom Hanks and Rosie O’Donnell,” the WSJ writes. “Mr. Modine, 62, boasts backing from Whoopi Goldberg and Diane Keaton.” But then the WSJ offers perhaps the most intriguing detail: Modine is backed by Drescher’s Nanny co-stars Charles Shaughnessy and Madeline Zima.

Matthew Modine v. Fran Drescher, in a Legal Sense: Modine threatened last week to sue Drescher for defamation if she didn’t issue a public apology by Friday, which she did not do. So now we wait to see if he sues. Here are the details, via Deadline. Long story short: Modine seems to be right that Drescher’s team misrepresented facts in an attempt to make him look bad. But I also found it overly dramatic for him to say, at a town hall meeting: “I’m ashamed of Fran Drescher…  But she’ll be judged by the people in the world after she’s gone, or by whatever god she worships.” Look, it all goes to prove my theory: actors enjoy drama.

What Are They For, Though: Sorry, I don’t mean to do vapid horse-race coverage of the SAG elections — because that’s what real elections are for. Deadline did a good job here of letting Modine and Drescher spell out their actual positions.

R.I.P. Ed Asner: The 91-year star of The Mary Tyler Moore Show and Pixar’s Up, among many, many projects, died yesterday. He remarkably played news director Lou Grant in both a sitcom and a drama: The sitcom, Mary Tyler Moore, ran from 1970 to 1977, and then he starred in his own drama, Lou Grant, from 1977 to 1982. Which goes to show you should attempt to do whatever you want to, creatively. “He was a beautiful actor,” James L. Brooks, the co-creator of The Mary Tyler Moore Show, told Variety. “He was just as deeply a good guy as everybody sensed he was.”

Tryon International Film Festival: The North Carolina film festival, held in the beautiful foothills of the Blue Ridge Mountains, is holding a series of outdoor workshops as part of this year’s get-together, held Friday Oct. 8 though Sunday Oct. 10. Among them is two-hour outdoor workshop, “From Screenplay to Screen, from Kevin Bernhardt (Echo Boomers, 3,000 Miles to Graceland) and Steven Esteb (Hate Crime). The festival will also feature about 50 curated films from around the world. Here are some details.

What If and the State of the MCU: The animated series What If is, for my money, the best Disney+ Marvel show so far. In the latest Low Key podcast Keith Dennie, Aaron Lanton and I talk about what makes it good, and what’s next for the Marvel Cinematic Universe. And also why I think Tom Cruise would be a great Wolverine.

Oh Hey: If you run a terrible superhero movie site desperate for fresh “content,” please don’t say there’s a “casting rumor” or “theory” or some nonsense about Tom Cruise playing Wolverine. It’s just me! It’s just a silly idea I threw out during a podcast conversation with friends. Thanks.
Schmigadoon!: The new Apple TV+ series, which I haven’t seen much talk about, is a total charmer. Cecily Strong and Keegan Michael-Key, who is brilliant and highly underrated, play a couple who wander off a trail on a couple’s retreat and find themselves trapped in a musical that’s kind of Oklahoma meets Hello, Dolly! What I’m saying is that males 18-34 are going to love it.

A Taste of Candyman; No Man of God Q&As; the Sound Stage Boom
Oyelowo Reboots The Rocketeer; Rodman in Vegas; Fat Suit Regrets