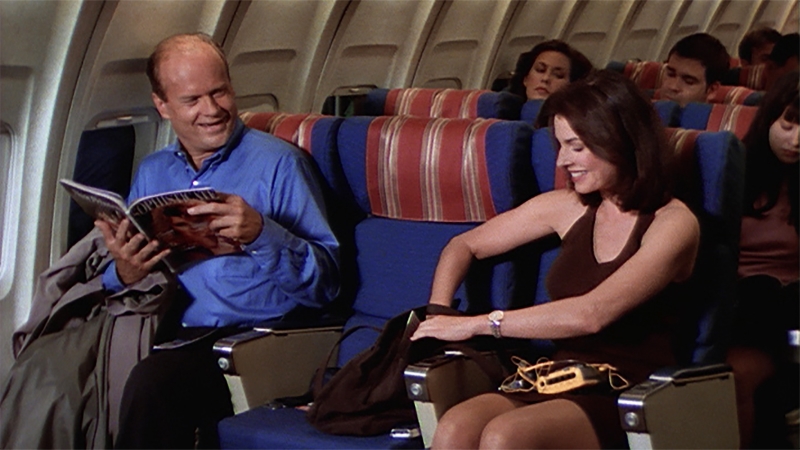 Wonderful News Up Top: News of Spider-Man: No Way Home‘s ability to rescue the 2021 box office were not exaggerated. The Hollywood Reporter says that the film scored the third largest box office preview gross of all-time! And Deadline reports that things are going similarly well for the lovable web-slinger overseas.

An Anecdote: MovieMaker editor Tim Molloy and publisher Deirdre McCarrick tried to go see Spider-Man Thursday night in suburban Boston. Molloy writes: “We were disappointed but kind of excited to see that everything was sold out. Everything. It’s a sight we hadn’t seen since Avengers: Endgame and it was amazing to see once-empty theaters roar back. No one wants superhero movies to be the only movies, but it was great to see that movies can still be the cultural and economic force they were way, way back in… 2019.”

Over in TV Land: Variety has compiled their ranked list of the best Frasier episodes ever. Not sure what the occasion is, but Frasier is always worth celebrating, ranking, revisiting, quoting — any time.

Thoughts from a Frasier Lover: Their #2 (“The Innkeepers”) and #1 (“The Ski Lodge”) are absolute classics so no complaints at the very top there. “Ham Radio” feels low at #17 — move that classic up!

My Sleeper Picks: I personally love the two episode stretch of Season 4’s finale “Odd Man Out” to Season 5 opener “Frasier’s Imaginary Friend.” In this two-parter, a lonely Frasier is encouraged to spontaneously meet a mystery woman at the airport. No surprise, this doesn’t go as expected, but it does lead to Frasier spending a weekend in Acapulco with supermodel Kelly Easterbrook – a supermodel none of his friends and family believe is real.

Another: I also love “Hot Ticket” where Frasier and Niles are embarrassed to wait in the standby line for the Opera, so they pretend to be smoking every time they’re spotted by their more fortunate friends with tickets.

Stream Them All: 11 seasons of Frasier are available to stream on Hulu.

Hijinks Ensue: Is a phrase of which I am fond — a phrase I realize can be used in every Frasier episode description.

David Fincher x Netflix: Netflix’s Global Film Chief Scott Stuber sits down — if that’s what you say for a Zoom conversation — for a conversation with Variety’s Rebecca Rubin. They discuss a number of Netflix films (both past and forthcoming) including David Fincher’s upcoming assassin thriller The Killer, which is currently filming in Europe with Michael Fassbender in the lead. Stuber notes Andrew Kevin Walker as the screenwriter who adapted the graphic novel, who worked with Fincher back on Se7en. So expect something dark.

What Else: Most notable to me from Variety‘s conversation is that Stuber indicated that Andrew Dominik’s Blonde, would likely be coming out next Fall. The much-anticipated film is a Joyce Carol Oates adaptation featuring Ana de Armas as Marilyn Monroe. Dominik doesn’t make a lot of films (this is only his third since 2007!) and having to wait even longer for his Killing Them Softly follow up is hard to swallow — especially since the film seemed complete enough to screen for Oates way back in September:

an exquisite portrait of Marilyn Monroe by Ana de Armas & director Andrew Dominic; one without the other could perhaps not have worked this magic. the tone of the film is hard to classify, not surreal but not totally realistic, not "horror" but suffused with the dread of horror. https://t.co/1r3w0Ysw0A

A Missed Opportunity: Rubin did a commendable job pushing Stuber to answer questions about Netflix’s ever-changing viewership metrics and their Dave Chappelle problem but didn’t ask about Blonde’s delays and the chatter over an internal battle between a R and NC-17 cut.

The Good News: The delay seems to indicate a possible Cannes or Berlinale premiere. I don’t attend either festival, so yep, I’m still sad.

More Netflix News: Spike Lee and the streamer have agreed to a multi-year creative partnership, Variety reports. Netflix and Lee previously worked together on the feature Da 5 Bloods and the series She’s Gotta Have It.

The Matrix Revisited: It’s been almost two decades since The Matrix Revolutions, and critic reactions have begun to roll in via social media for the fourth installment The Matrix Resurrections. Reactions appear decidedly mixed. Some applaud its goofiness, its heart and its openly meta qualities. Others criticize the exposition, confusing nature (despite that exposition) and weak action sequences. The Hollywood Reporter collects some of the reactions.

MATRIX RESURRECTIONS is much more meta than you’re expecting, locking on to the original film like a Sonic & Knuckles cartridge so it can remix and riff to Lana W’s delight. Loved all that, loved the love story, loved gay actors throwing punches. But action is surprisingly blah!

#TheMatrixResurrections is a comedy. The action is disappointing and the new characters are thin. But the metatextual commentary is biting. It wrestles with its own legacy in that JURASSIC WORLD/BAD BOYS 3/RP1 fashion. I prefer the first three, but this is a wild swing. pic.twitter.com/7i3n5qUvOq

#TheMatrixResurrections is more fun than I remember the sequels ever being. Yes it's bogged down in exposition like the previous two, but there's a knowing wink to it all now. Newcomers Neil Patrick Harris and Jonathan Groff are key to that. Oh and the climax ROCKS. pic.twitter.com/2aWXYI7YAi

When: The Matrix Resurrections will open in theaters and will be available to stream on HBO Max next Wednesday.

Weekend Streaming Pick: Terrence Malick’s 2016 documentary Voyage of Time is now streaming for the first time ever on Mubi. There is a longer version narrated by Cate Blanchett but this is the one narrated by Brad Pitt. I saw the Pitt-version in IMAX way back when I was still a MovieMaker intern and can confirm it is beautiful. A true can’t miss for both nature doc fans and those who follow the elusive Texan moviemaker.

And Its Short!: With long movies the seeming norm these days, rejoice that my recommendation is only 45 minutes.

Also on Mubi: If you want an entertaining light-hearted romp that illustrates that the spirit of low-budget American filmmaking is alive and well, check out Michael Bilandic’s Project Space 13. After, read my chat with Bilandic. The film also clocks in at a brisk 67 minutes.

Backup Pick: If all that Meta Matrix talk has you feeling some type of way, then all the Scream movies are currently streaming on Paramount+. I watched Scream 2 and 3 recently and can certainly recommend Scream 2. But Scream 3? I’ll just say that I did enjoy Parker Posey’s performance as Jennifer Jolie.

Scream Again: I’m excited for the new Scream, which hits theaters on January 14. Pick up our Winter issue in early 2022 for a special feature on Scream star Jenna Ortega. Ortega was a standout in You Season 2. But You Season 3? I’ll just say that I did enjoy Victoria Pedretti’s performance as Love Quinn.

Third Somethings in a Series that are Actually Good: The Wire Season 3, Lord of the Rings: Return of the King, Harry Potter and the Prisoner of Azkaban, Mission: Impossible III.

Lord of the Rings Tarantino Threat; Robert Rodriguez Takes on Boba Fett; Spidey Does Well in the Land of the Wet
Spidey Is #2; Alexander Skarsgård Goes Inigo Montoya in The Northman; Louis C.K. Is Back