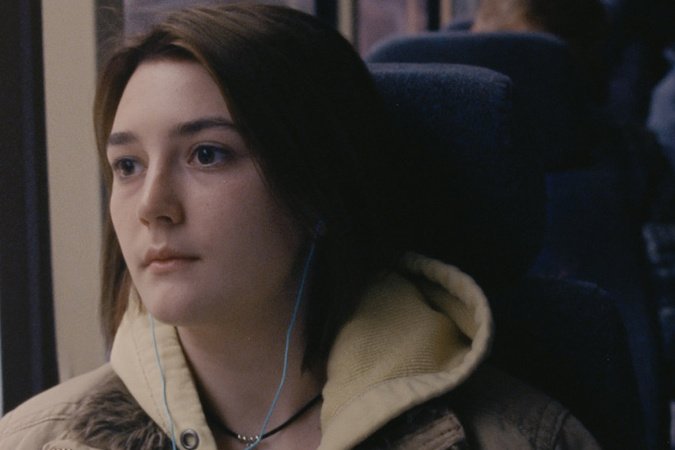 Sidney Flanigan’s road to starring in Never Rarely Sometimes Always, one of the most celebrated films of the year, began in her native Buffalo, New York, when she was 14. She happened to be dating a guy who was crashing at a house that one weekend hosted a wedding. One of the attendees was Scott Cummings, in town shooting his experimental short Buffalo Juggalos. He happened to be married to fellow filmmaker Eliza Hittman.

Flanigan, a budding musician, made an impression. The couple kept tabs on her evolution from YouTube bedroom songbird to DIY scene fixture, the way you follow the online career of someone you met once, don’t really know, but feel a warm affinity toward, nonetheless. When Hittman finished her Never Rarely Sometimes Always script and secured funding and distribution—with an insanely tight pre-production scheduled underway—her mind went instinctively to Flanigan. She urged her husband to contact her to audition.

Flanigan was working at a supermarket at the time.

“I thought it was a scam, honestly,” Flanigan said of Cummings’ first email. “I was like, ‘Who is this person? I barely remember meeting you.’”

Her other recent jobs had included being a janitor.

“When you grow up working paycheck to paycheck, an opportunity like that comes your way and you think, ‘I can’t do that,’” Flanigan added.

Hittman was understanding, but didn’t give up. She got Flanigan to read the script. And then Flanigan knew she had to say yes.

Within a month, she was flying back and forth to New York City for fittings, chemistry reads with costar and fellow newcomer Talia Ryder, and unconventional screen tests where Hittman and cinematographer Hélène Louvart would film her doing things like riding the subway and ordering pastries in Chinatown.

When I asked Flanigan what it took for her to take the leap of faith, she talked about her roommates fronting her rent during production, and how she sent them money through Venmo when she got paid.

She understands the struggle for money. In Never Rarely Sometimes Always she plays Autumn, a young woman who travels from rural Pennsylvania to New York City in search of an abortion. The film shows how much money opens doors, and how much a lack of it restricts options, no matter what the laws say.

“It’s interesting because no one has brought that up,” Flanigan tells me. “Money plays a huge role. Lack of access to money and resources is a huge issue when it comes to healthcare and reproductive rights in this country. They say the wealthy will always have access to abortion, even if the right is stripped away.”

The film also addresses what it’s like to be a young woman who’s struggling financially. She has a lecherous manager at her supermarket job, and a flirty boy who meets her and Ryder’s character, Skylar, won’t even consider helping them out of a desperate situation without a sexual quid-pro-quo. Never Rarely Sometimes Always conjures a vision of young, working-poor women in a world of men who manipulate their vulnerability.

“It’s this unfortunate recognition that the film puts on display,” Flanigan explains, “of what women know they have to go through in order to get certain things. Things that they just deserve, period.” Securing the abortion becomes increasingly complicated. Autumn is swallowed in a sea of legal knots and personal battles. And things as simple as food, a safe place to sleep, and help from strangers prove elusive.

The grocery store job is long behind Flanigan. At Berlinale, she accepted the coveted Silver Bear—for what I can’t stress enough is her first performance. Whatever she does next will be her decision alone.