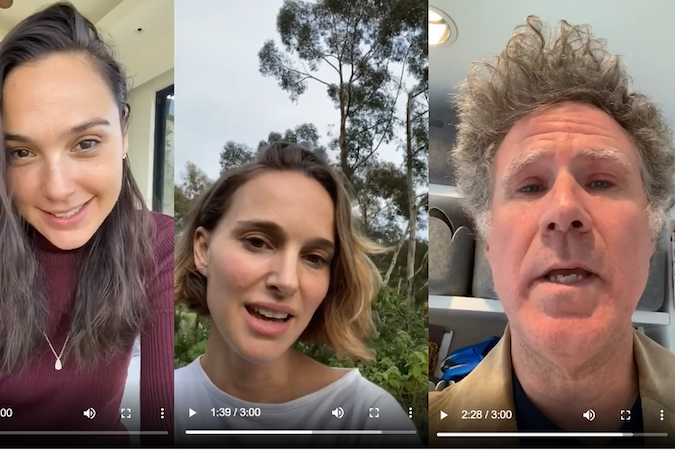 Madonna recorded a weird bathtub video. Vanessa Hudgens said coronavirus deaths were “like, inevitable.” Gal Gadot’s “Imagine” singalong was so poorly received that it sparked a backlash against John Lennon, who has been dead for 39 years.

When singer Pharrell Williams asked his 11 million Twitter followers to contribute to a GoFundMe to buy “masks, gowns, and other critical items” for medical workers, one typical response was, “They’re trying to raise $10 million. You’re worth $150 million. But you are asking our broke asses to donate?”

Decisions to self-quarantine and stay home in the coronavirus era have led many celebrities to communicate directly with fans as never before, without the aid of the writers and publicists who usually protect them from looking foolish. It isn’t always pretty.

Celebrities with nothing else to do have posted videos, and fans with nothing to do have ridiculed them. We’ve vented our fears and frustrations at those who come off as overprivileged, out of touch, or desperate for attention. It’s been kind of therapeutic, in ways the celebrities probably didn’t intend.

Every time a celebrity’s name pops up as a trending topic on Twitter, we cringe: Have they tested positive for coronavirus? Or said something stupid on Instagram?

Not everyone has earned our ire. Tom Hanks and Rita Wilson, the first celebrities to announce they tested positive, have received a warm outpouring of support. So has Idris Elba. Steve Martin played a lovely song on his banjo, offending no one.

But others should have stayed off Twitter. Because they have proven, once and for all, Hollywood’s need for handlers.

Chappelle’s Show co-creator Neil Brennan, one of Hollywood’s most in-demand comedy writers, tweeted this week: “The next Writers Guild strike should just be us showing celebrity videos from the pandemic. We’ll be able to set our price.”

When Madonna posted a video of herself singing her hit “Vogue” with the lyrics changed to “let’s go eat some fried fish,” parody master Al Yankovic shared the video with the commentary, “See? Not so easy, is it?”

A writer for The Guardian asked: “Could a neighbour maybe pop round to check on her?”

We’ve all had crazy thoughts and said silly things during our national bout of fear, confusion, and cabin fever. But when most of us tweet or Instagram something dopey, few people notice or care. If a friend from high school posts something dumb, we give him the benefit of the doubt, because he probably isn’t sharing it from an estate in Malibu.

We aren’t very forgiving of celebrity gaffes to begin with. And now the usual excuses no longer apply. When Hudgens said in a video that her comments about people dying were taken out of context, critics pounced, nothing that she herself had released the video. She has repeatedly apologized.

“Imagine” is a song about an end to possessions, countries, and religion, and a world in which we are all united by our humanity. But the well-meaning celebrity singalong, led by Gadot and featuring A-listers like Natalie Portman, Will Ferrell, and Mark Ruffalo, seemed instead to unite all of humanity in thinking it was a bad idea. (Of course some people enjoyed it: It earned 1.5 million likes, as well as lots of derision.)

Days after the backlash died down, a tweet went viral that hurled a series of accusations at the song’s long-dead author.

“John Lennon was an absent, abusive father who also beat the shit out of every single woman he was ever with. By the time he wrote ‘Imagine,’ he was richer than you’ll ever be. His greatest accomplishment in life was cosplaying as a progressive, peaceful activist,” said a Twitter user named RandiFoor Dalton, a self-described “radical Mohawk librarian.” She received 36,000 retweets.

(Lennon has not commented—something a lot of celebrities should consider.)

Also: Many websites list Pharrell Williams’ net worth at $150 million, but none seem to provide a source. This may be a case of sites rampantly plagiarizing each other.

And, in Williams’ defense, he had nothing to do with the “Imagine” singalong.

Movie News Roundup: A Birds of Prey Test; Doctor Seeks Hollywood Help; Take Our Poll
Just Mercy Is Very Accurate, Because It Had to Be