In animation, “two-dimensional” can mean a few things. It can refer to a simple line drawing on paper — think Mickey Mouse in “Steamboat Willie.” Pejoratively, it can refer to simplistic, overly simple storytelling. “The Pope’s Dog,” an exhilarating new film by a team of nearly 80 SCAD Animation Students, doesn’t fit either of those definitions. Though it is, technically, two-dimensional, it more resembles 3D animation in large part thanks to the innovation of Noah Catan, one of the students who worked on the short film and has since gone on to work on massive projects you’ve almost definitely seen. The student innovations serve a story that may seem simple on the surface, but also contains a beautiful metaphor about progress and change. 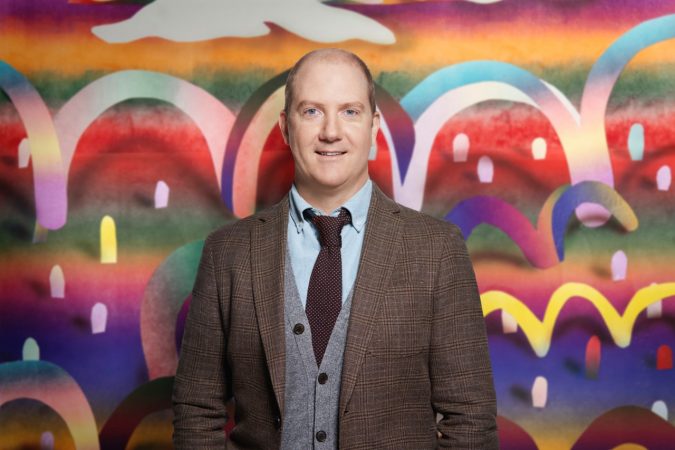 The story of “The Pope’s Dog” begins with professor Chris Gallagher, the chair of SCAD Animation, who received his MFA in computer art at the school before going on to work as technical director for Walt Disney Animation Studios on films including Ralph Wrecks the Internet, Moana, Zootopia, Big Hero 6, Frozen and Tangled. He returned to the Savannah College of Art and Design in 2017, this time on the faculty, and quickly decided that the best way to teach students animation was to get them working and collaborating on films.

The model of SCAD Animation Studios is to make a short film a year, though they may take a little longer than a year to complete. It’s different than a normal class, in that students apply to take part. Gallagher acts like a studio head, who guides the process.

“We say, ‘We need some writers. We need some directors. We need animators.’ And students actually apply. They make a resume, they put together a portfolio, we interview them, and we hire them for their skill set — just the same as if they are hired at a regular studio, because in all actuality SCAD Animation Studios is a studio. It just happens to be 100% run by students,” Gallagher explains.

The first SCAD Animation Studios film was “Bearly,” a charming computer-animated musical, directed by SCAD student Cherry Zhou, about a bear cub who wants to see the changing seasons instead of hibernating. You can watch it here. It was followed by “Hex Limit,” a cyberpunk broomstick chase directed by SCAD student Jordan Fleming, which you can watch here.For SCAD’s next student film, Gallagher wanted to expand on the achievements of the previous shorts while doing something cutting-edge that the students hadn’t done before.

“The Pope’s Dog” was led by SCAD’s associate chair of animation, John Webber, who got his BFA in animation at SCAD and whose jobs have included working for Walt Disney Feature Animation as a character animator on films including A Few Good Ghosts, Lilo and Stitch, Mulan, Hercules and Pocahontas.

“He was teaching an intro class to students, and he’s like ‘All right. Let’s do dogs,’ and they’re like, “No — dogs aren’t fun,” Gallagher recalls. “He said “dogs are so much fun.”

A still from The Pope’s Dog

The exchange inspired Gallagher to challenge the SCAD Animation Studios students to come up with a great dog story. Because it was around 2020, and the presidential election was on everyone’s mind, they considered doing a story about a dog in the White House. But then they heightened the idea.

“It ended up being a black comedy with the Pope’s new dog in the Vatican,” Gallagher says.

The film, directed by SCAD student Neko Pilarcik-Tellez, involves a diminutive, good-natured, somewhat mischievous pope who tries to get his new dog into the Vatican, past guards who cling to the old rule that no dogs are allowed. Through a comedy of errors, the dog enters an exorcism chamber, where he’s possessed and causes chaos. But then, when things look very dark, divine intervention allows the dog to stay — as if God himself has blessed change at the Vatican. You can read it as a cute story about a dog, or as a metaphor about religions evolving with the times. (The trailer is above, or here.)

But the students didn’t just want to tell a cool story about breaking social barriers. They also wanted to break technological ones. One goal, inspired by Disney’s Tarzan, was to make a film in which the camera feels alive. That means finding a way to make the two-dimensional characters feel three-dimensional.

Many viewers, thanks to 3D glasses, assume that 3D images need to seem to pop off the screen, like in Avatar. But that effect is actually known as stereoscopic, because it uses the two lenses to create the illusion of depth. 3D animation is different, Gallagher explains.

“When you say 2D, it’s traditional animation,” says Gallagher. “It’s a pencil and one sheet of paper. Nowadays everything is done in the computer, but there’s still the sense of a drawn character that looks like it was done as a labor of love by hand.

Creating that effect is largely about lighting — or rather, creating the illusion that lights are hitting characters and other objects in specific ways. This was Noah Catan’s massive contribution to the project.

Catan grew up in Quezon City in the Philippines, just outside Manila. He developed an interest in animation at a very early age, and even took a year off of high school to work on an animation job. After he completed high school he attended the former SCAD Hong Kong campus. 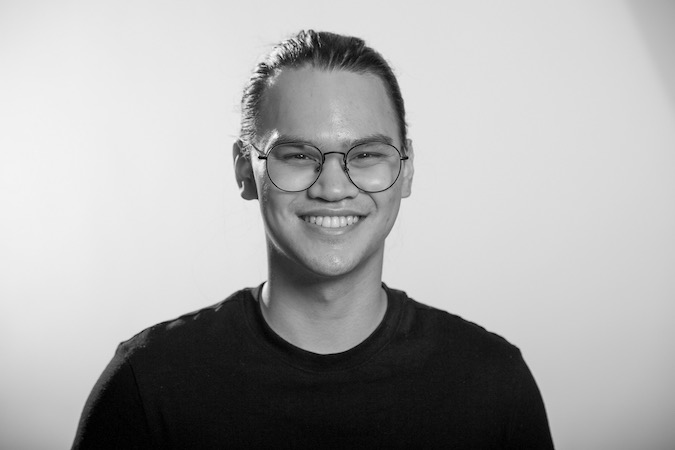 SCAD Hong Kong, now closed, was one of three SCAD campuses — besides the main one in Savannah, there’s also a sizable campus in Atlanta. SCAD also has a residential study abroad program in Lacoste, France.

Catan started out studying animation, but soon made a change, to focus on becoming a compositor — the person who takes several different visual assets, such as computer-generated images and live footage, to create one cohesive shot. It started when one of the SCAD visual effects professors taught him to use Nuke (short for “new compositor”), a digital compositing app first developed by Digital Domain. Foundry evolved it after the London-based company The Foundry took over Nuke in 2007.

As soon as the professor showed him how it works, Catan says, “I fell in love with it.”

Catan was an exception to the SCAD Animation Studios rule that students apply to work on films. He was going to school at the Savannah campus when the project found him.

“I didn’t formally apply to it,” Catan explains. “I was recommended by one of my friends. He was like, ‘oh, they’re looking for someone who can come up with a technique to do this Klaus-style 3D lighting.”

Things get a little intense in “The Pope’s Dog”

Klaus is a 2019 Netflix animated film by Sergio Pablos Animation Studios that is notable for its very realistic, atmospheric use of light and shadow. Catan spent a long time trying to reverse-engineer how Klaus did it.

“I’ve been a fan of SPA Studios and Klaus and I thought that what they were doing with the new technology they developed for that film was so spectacular. I was following all their artists like trying to get a glimpse at how they did it, and those thoughts had been bottled in my mind for a while. And when suddenly at SCAD they said, ‘We’re looking for someone who can do that, I immediately contacted John Weber, who was heading the project, and I told him that I would do some R&D — no promises, but give me a few days to to figure out how to do this, and I worked with my friend Louise Wong, who is a 2D animator,” says Catan. “And after a few days, it was like, ‘I figured it out.’”

Everyone was happy with the turnaround test — which demonstrated light at different angles — and the plan was a go. But Catan realized his system needed to be simple enough for everyone to use.

He notes that Nuke is “an incredible piece of software, but it’s also very daunting to learn, if you’ve never worked with a node-based software.” So he looked for ways to streamline the process.

“So that was basically my job — not only to supervise the the lighting artists in production, but also to to build the new toolset that allowed us to give to the animation volumetric lighting. We ended up calling it Pantheon.”

Catan trained everyone on how to use Pantheon. He explains how it works:

“Let’s say there are three different lights in the scene. Let’s say you have a key light that’s the main source of light. you have ambient light, which comes from the sky. And you have bounce light, which is the light from everywhere that’s hitting the ground and then bouncing up to the camera. We have to create each of those lights: We’re painting the key light, then we have to paint the ambient light then you have to paint the bounce light. It’s basically all these different light passes combined, and that gives the illusion of a volumetric look.

“It’s difficult to compress into one software because it’s a lot. But we managed to to do it quite efficiently, I think.”

The skills Catan learned at SCAD helped him land coveted jobs: An internship at The Mill NY in New York City led to a job as an associate compositor there, and he’s now a compositor at Framestore. His reel includes stunning work, including an ad for Paramount+ in which Bumblebee from the Transformers is doused with water, Flashdance-style, and a Super Bowl ad in which Lebron James talks with his younger self.

He hopes that someday soon he can release the technology he developed for “The Pope’s Dog” to everyone, so that other animators can benefit from what he and the other SCAD students learned.

“My next step is to fix some bugs to make it more presentable, and release it to the public,” he says. “So that more people can access this and use it in their work, and maybe even develop their own things on top of it. I think it has the potential to inspire more good things coming out of animation at the student level and beyond.”

Main image: The pope and his dog raise eyebrows in “The Pope’s Dog.” All photos courtesy of SCAD Animation Studios.