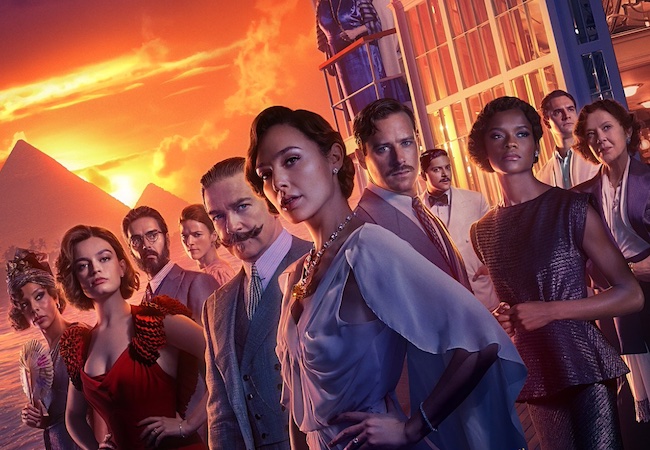 The Matrix Resurrections is here and so are the silly reactions; Armie Hammer will be in the next Armie Hammer movie; Maggie Gyllenhaal vows to avoid dopey, trope-y sex scenes. All in today’s Movie News Rundown.

Out Today: The Matrix Resurrections, a movie I am vaguely curious about and will probably watch. It’s in theaters and on HBO Max.

Dept. of Oh Will You Stop: “We are all in the Matrix now!” has long been one of the hackiest think pieces you can write in response to a new Matrix movie, but this hysterical New York Times guest essay goes the extra mile to say, no, actually everything is even worse than in The Matrix. Please go play with a puppy and come back when you’re in a better mood.

No More Boring Sex Scenes: In her acclaimed directorial debut The Lost Daughter, Maggie Gyllenhaal made a point to avoid “Victoria’s-Secret-demi-cup-bra-arched-back fantasy sex,” she tells MovieMaker ‘s Margeaux Sippell. “I don’t find it hot, and I think it’s a little boring. … I am interested in real human expressions of sex.” The Lost Daughter arrives on Netflix on Dec. 31.

Mm-hm: The Hollywood Reporter spoke to some of the good folks in L.A.’s hospitality industry about bracing for Omicron and more potential restrictions. You can guess how not-great they’re feeling.

Okay But: It’s misty where I am, and it’s just lovely. Also lovely: trees, cinnamon-glaze bagels, trying to learn a new language, when you ask a toddler for a hug and they acquiesce; long drives; getting the recycling together; fresh laundry; making coffee at home; getting coffee somewhere else; playing Spades; walks; jogs; good sits; making lists and crossing things off; the holidays.

Out Later Today: Check out this awesome GIF that MovieMaker design director Ryan Ward made for the latest episode of the MovieMaker podcast, featuring The Scary of Sixty-First director Dasha Nekrasova, pictured. The movie is in New York and L.A. theaters and arrives on Shudder on Christmas Eve. The podcast will be out very, very soon.

Oh, Okay, Fine: Finished the podcast a little ahead of schedule so you can check it out right here, right now. There is no other place IIIII wanna be. Happy birthday, Jesus (Jones).

Armie Hammer, Unerased: Variety has this piece noting that Armie Hammer is in the trailer and new poster for Death on the Nile, the sequel to Murder on the Orient Express, and has not been scrubbed from the film. Variety contends that the “upcoming press tour for Death on the Nile could become a headache” because “even if Hammer doesn’t participate, the remaining cast members could be peppered with questions about him rather than their work on the movie.”

May I Editorialize?: I found Murder on the Orient Express to be pompous, fussy and dull.

Oh! But Also, About Armie Hammer: Can’t everyone involved in the film just recite prepared statements about how they didn’t know about the accusations against him when the movie was being made, and that they hope it won’t distract from their movie? We’re all grown-ups here, right?

What’s the Status of the Hammer Case, Anyway? Hammer has been “accused of rape, sexual assault and abusive behavior by extramarital partners,” notes Variety in a silly sentence, since the extramarital part is in a different universe of wrong than the very awful accusations earlier in the sentence.  But I digress. The LAPD has investigated but Hammer he has not been charged, and he has denied all wrongdoing and said all of his relationships were consensual. Will he be charged? No one knows, but TMZ cites sources who say it isn’t likely. Of course, we don’t know who these sources are, so they could be trying to spin things for Hammer.

Comment of the Day: Yesterday Caleb Hammond asked for your opinion on overlooked 2021 movies. Steve Warren responds: François Ozon’s Summer of 85 won some awards in Europe in 2020, played some festivals and had a token release in the US in 2021; but it deserves so much more attention. It’s the love story of two gay teens, but the narration generates suspense with references to a death to come. It’s the best example yet of a narrative that alternates between past and present, keeping both interesting and involving.

This Song Is Thirty: When it came out, I thought, I guess this is how all songs will sound from now on. But that’s not always the case. Things go in cycles. Also, is anyone else seeing the ad for Moxie before the song starts? Horrifying.

Main image: Death on the Nile.