Relic Director Natalie Erika James: How I Felt Through the Darkness to My Sundance Debut 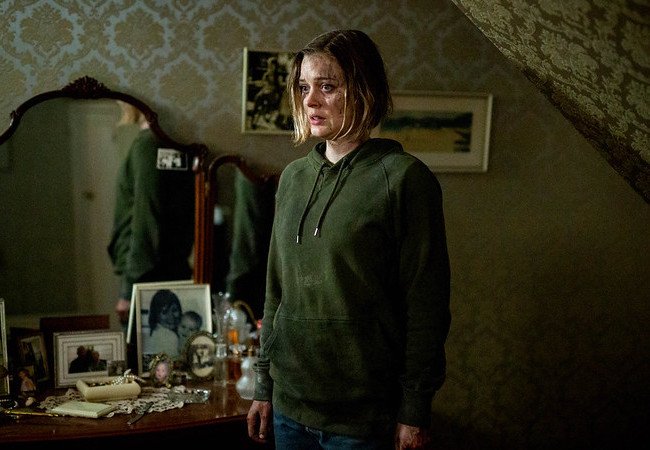 Director Natalie Erika James makes her Sundance Film Festival feature debut this week with Relic, a horror film starring Emily Mortimer, Bella Heathcote and Robyn Nevin as a family dealing with Alzheimer’s — and another creeping, mysterious threat. In the piece below, the Austalian-Japanese moviemaker talks about her inspirations and the struggles she overcame on the way to Relic and Sundance.

In 2014, as I was traveling through Japan, I came across a curious temple in Nagano prefecture. At the back of the temple, there were stairs that led down into a black void with a sign that translated roughly to, “Find the key to paradise.”

The temple was quiet that day. So, very much alone, I descended down the stairs into darkness, the kind of darkness where it makes no difference whether your eyes are opened or closed. Groping my way through the space, I found myself in a hallway with a series of turns. With no sight and no conception of how long the passage would extend, my primal senses kicked into gear. My lizard brain conjured a presence in the dark: an unseen predator, lurking. I could hear my heartbeat in my ears. I was scared of moving forward, but refused to turn back.

At some point, my hand fell upon a metal, doorknob-like protrusion affixed to the wall: presumably the purpose of this wacky exercise in masochism. I must have been down there for all of two minutes, but I swear it felt like half an hour. When I finally emerged up the steps through the other side, I was buzzing. The adrenaline was swimming laps with ease through my body. Everything seemed brighter, sharper. I felt buoyed by my small, private achievement for the rest of the day.

Looking back, this unexpected side-quest must have been the inspiration behind the labyrinth in my debut feature, Relic. Drawing from personal experience, Relic is a psychological horror about Alzheimer’s, told through a story about a grandmother, mother and daughter whose family home is being taken over by a sinister force.

There were so many moments of joy throughout the making of this film. When an actor’s performance was like magic, when the whole team worked together with ease, when the prep paid off or when inspiration would arise in the moment and push ideas further. Moments where I would think, “This is exactly what I want to do for the rest of my life.”

​But there were certainly many lessons learned in stepping up to helm a feature film. All of my previous experience had been in making self-funded shorts and mid- to low-budget commercials and music videos. A lot of these projects had involved scraping together gear and crew working for “mates rates” or favors. Projects held together by sheer determination, friendships and passion for the work.

When you’re used to working agilely, the constraints and practicalities of “the machine” can be frustrating to adjust to. My DOP/ long-time collaborator and I quickly learned this when we got a slap on the wrist for lingering and trying to squeeze in a simple cutaway shot after lunch had been called. Much to the chagrin of our incredibly patient producers, we’d occasionally sneak off during lunch with my other long-time collaborator/director’s assistant, and the three of us would conceive of and shoot some mood shots around the set.

The worst moment of not being able to push beyond the minutes was during one of our biggest stunt days. We’d shot one take of an actor fighting through a breakaway wall. I knew we just barely had the coverage, and it was going to affect the edit. But another breakaway wall was going to take too long to set up, so we had to relinquish going for another take. It felt like a heavy defeat to spend months designing and building the set and coordinating the stunt, only to settle for something subpar. Understanding my disappointment, my art department team presented the spare breakaway wall to me upon wrapping the film so I could kick and punch clean through it myself. I had scabs on my knuckles for days afterwards, but the satisfaction was worth it.

On the flip side, it was nice to be able to focus on just the one job of directing. Often with shorts you’re juggling different elements of production out of necessity or having to worry about damage control because you’re shooting at your mate’s mum’s place and someone’s spilt coffee on her carpet, etc. You’re trying to squeeze the most out of your resources and you’re often pulling ridiculous hours. In comparison, the feature schedule was paced well, and the weekends allowed everyone to recharge and regroup properly.

My biggest misconception going into the feature was thinking there would automatically be enough time scheduled in pre-production. I’m naturally a planner, and pre-production during my shorts has been characterized by a well-prepared and methodical approach. By the time the cameras start rolling, I’ve usually shot-listed and drawn up camera floorplans weeks in advance. I’ll have spent ample time with the actors and seen and approved every prop and costume and prosthetics element. I was used to having not only a plan A, but being comfortable with plan B and C for any likely obstacles.

This wasn’t exactly the case for our six-week shoot — not when we faced the combined challenges of having a few locations fall through, having our set designs over-budget and needing to rethink everything. Not with key props that weren’t ready until the day before we shot, etc. This time, I had to learn to ride the chaos and trust my instincts a bit more. There was definitely something freeing about improvising more and embracing spur-of-the-moment ideas.

Post-production has always been the most emotionally challenging aspect of filmmaking for me. It’s when the high of your rushes are long gone, and you have to reconcile the potential of everything you wanted the film to be and what you have baked on-screen.

Post days truly are the darkest days. There’s no excitement of the upcoming shoot, there’s no on-set camaraderie or adrenalin. Post feels like you’re being constantly hit in the face with your oversights and mistakes.

(I’m being slightly dramatic here – there are definitely wins along the way. It’s satisfying to see the progression of the edit when you’re in the trenches with your editor, and starting each new phase of post is exciting. Distracting yourself with writing a new script to channel your creative focus elsewhere helps too.)

Nonetheless, there are times when you wake up consumed with anxiety; your heart drumming an erratic beat in your chest. You feel like you’ll never find your way out. But inevitably, when you face darkness like that, you come out the other side, thrumming with life.

Relic premieres at 11:59 p.m. Saturday at the Ray Theater at the Sundance Film Festival.