The Regional Film Centers of America: Four Institutions That Have Shaped Independent Film For Decades

Studio executives watched as The Graduate, made for $3 million, sold more tickets than Dr. Dolittle, made for $17 million. Bonnie and Clyde, made for $2.5 million, creamed Camelot, made for $13 million.

During this pivotal year, Sheldon Renan wrote a small slim paperback which entirely sidestepped the question “what do people want to see?” by instead addressing the question “what do people want to make?” Renan’s book An Introduction to the American Underground Film was about movies made by individual artists working alone or nearly alone. While the big studios were making enormous turkeys, searching for the key to the hearts of their lost audiences, his book was about tiny movies made on no budgets by obscure artists very far from Hollywood.

Renan influenced generations of directors. The heart of his book is a series of portraits. He writes:

“Jack Smith is an anarchist, and his films break all the rules of film art. They go too far, and they do it on purpose. They are too scratchy, too nervous, too vulgar, and at times too beautiful.”

The writing glows with admiration. Who wouldn’t want to become one of the cinematic explorers Renan describes? The films he catalogs range from under a minute to over eight hours. Some use animation, some use found footage and some don’t even use cameras. Yet, all seem to have been made in response to a dare: Bet you can’t do this. Renan writes about them as an insider, but remains matter of fact, explaining that underground films are not seen because no one wants to see them:

“For good or for bad, the underground filmmaker is a man alone. But he is free to decide. This is a prerequisite to the making of art.”

At one time called “experimental,” then “avant-garde,” Renan predicted this branch of American filmmaking would next be called “expanded cinema.” (Just how much it would expand, he had no idea!) Whatever we want to call it, he says, it has always been with us. We don’t seem to be able to live without it. The diversity and unpredictability of independent, sometimes actively noncommercial filmmaking is essential to the vigor of American cinema.

James Gray, the director of The Lost City of Z, talked about this in a recent interview in Vulture:

“If the audience only gets to see Marvel, then they only want Marvel, and then if they only want Marvel, only Marvel is made. I don’t even have a problem with Marvel. The problem is not the specifics of each movie, the problem is it’s the only movie you can see now in a multiplex, and when it’s the only game in town, you’re looking at the beginning of the death throes of an art form.”

In 1970, Renan made a proposal to the National Endowment of the Arts: Why not support a network of film centers spread across the country? Why not bring a wide range of documentaries, foreign films, art films, underground and avant-garde films to regional audiences? His logic was the same as Gray’s: If we want American cinema to thrive, we have to make sure young artists see films which represent the full range of expression of the art form. Four regional film centers, in Berkeley, Portland, Chicago and Detroit, were funded through this initiative. They still serve audiences, and inspire filmmakers, today.

After his tour of duty at the NEA, Renan became a filmmaker himself, working on a wide range of projects as writer, director, producer (or all three). The Killing of America, a 1982 documentary co-directed with Leonard Schrader, was recently released on Blu-ray, DVD and VOD. His classic guide, An Introduction to the American Underground Film, can be found at archive.org.

The Berkeley Art Museum and Pacific Film Archive in 2016

Mission: “BAMPFA inspires the imagination, ignites critical dialogue, and activates community engagement through art and film, and other forms of creative expression.”

Signature Programs: Committed Cinema, featuring artists whose films and videos arise out of political conviction and aesthetic innovation to explore vital and urgent issues of our times; annual Les Blank Lectures. The Film Library and Study Center is one of the major film reference resources in the country.

Good To Know: “We often hear from established filmmakers that BAMPFA was the first venue to screen their work, so we are known for spotting talent.” 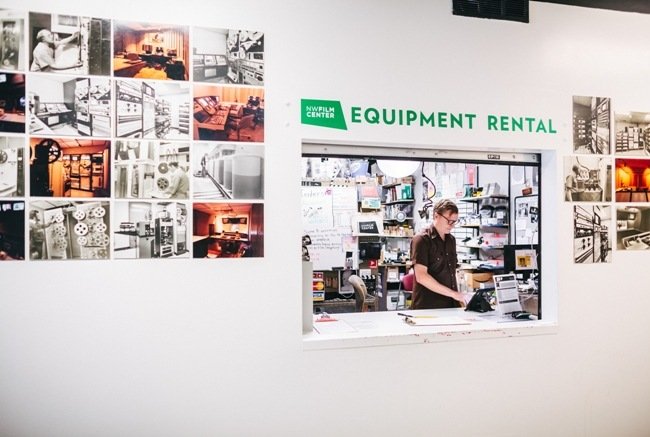 Mission: “Founded to encourage the study, appreciation, and utilization of the moving image arts”

Affiliation: School of the Art Institute of Chicago

Mission: “GSFC exhibits a range of carefully curated film art in technically excellent facilities, and educates the audience, setting film in an historical and cultural context through courses, lectures, panel discussions, and publications, and through research and collections.”

Mission: “Dedicated to cultivating awareness, appreciation, understanding and knowledge of the cinematic medium and its history”

Good To Know: The Samoan bodyguard named Elliot Wilhelm in Be Cool (2005), played by Dwayne “The Rock” Johnson, is Elmore Leonard’s sly tribute to the director of Detroit Film Theatre. MM

What’s In An Eighth? An Assistant Director Explains How to Break a Screenplay Page and Plan Shots
A Fellow Conspirator: One of Werner Herzog’s "Good Soldiers" Takes Us Inside His Moviemaking Workshop