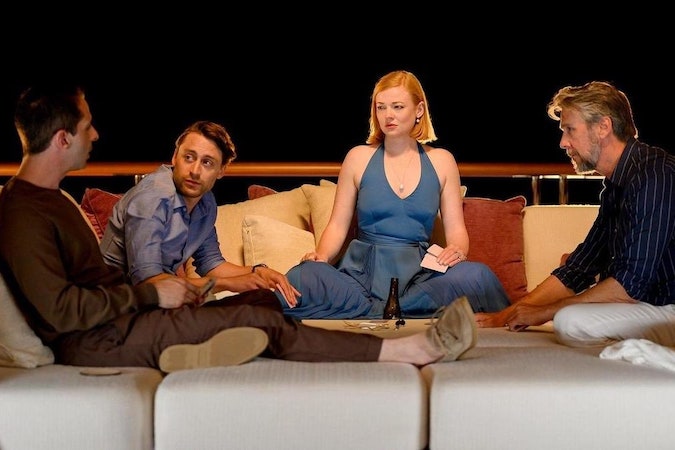 Spider-Man: No Way Home trailer leaks; Succession is back in two months; Scarlett Johansson-related hyperbole. Plus: Beware of “red flag movies” — or not. All in today’s Movie News Rundown.

Break Into The Industry: On every episode of The Industry podcast, presented by MovieMaker, Dan Delgado tells stories of Hollywood’s weirdest decisions, with a special place in his heart for those who tried — and usually failed — to make something great. Except today, when Dan tells us the origin story of the podcast, and why he loves giving moviemakers a chance to tell their side of the story. You can listen on Apple or Spotify or here:

Free Guy Endures: Deadline notes that the Ryan Reynolds film had the best staying power of any film this summer, earning $18.8 million to lead the box office in its second weekend.

Succession: If you’re wondering when the best show on TV* will be back, great news from the Succession Twitter feed: This morning it posted the word “October.” Among those joining the cast is Dasha Nekrasova, who starred on our spring cover and is profiled by Caleb Hammond right here.

Black Canary: Lovecraft Country creator Misha Green and star Jurnee Smollet will reunite for an HBO Max film about Black Canary, Smollet’s supervoiced Birds of Prey character. This is HBO Max’s second recent greenlight of a film based on a female Gothamite — Leslie Grace was announced as the lead in Batgirl almost exactly a month ago.

Spider-Man: No Way Home Trailer Leak: What appears to be a leaked Spider-Man: No Way Home trailer crept onto the interweb today, prompting Sony to make lots of legal demands. As The Hollywood Reporter notes, Sony seemed to be in a “whack-a-mole situation,” wherein every time one copy of the video was taken down, another would be appear. True MCU fans would have gone with a Hydra metaphor, but it’s okay. I’ve watched the thing and regret it. The quality is awful because the jerks who pirated it talk over the trailer, and aren’t good at taking handheld videos. So please trust me that if you like Spider-Man at all, this is no way to watch the Spider: Man: No Way Home trailer.

Speaking of Misogynistic Attacks: Today I learned that one of Disney’s lawyers in the case is Daniel Petrocelli, who won a $33.5 million civil judgement against O.J. Simpson by convincing the jury that he was responsible for the deaths Ron Goldman and Simpson’s ex, Nicole Brown Simpson.

Today in Hyperbole: Deadline says says the Scarlett Johansson lawsuit has become a “Cuban Missile Crisis level war of words.” That’s referring to the time the U.S. and Soviet Union almost got into a nuclear war. Can everyone please calm down, please?

Today in Hyperbole, Part 2: The tweet below about “red flag movies” set off lots of objections from people who said you can like a movie for lots of reasons and not necessarily because you’re a maniac. That said, Joker is boring.**

Hey Film Twitter, I got a question.
We all know red flag movies, Fight Club, The Joker, etc, that we all can spot on sight, but is there any green flag movies?
Movies that you hear someone say that makes you instantly trust or like a person?

Comment of the Day: “Travis, There’s a whole lot of us that believe you and in you. Thank you,” writes Jin Marich in response to this post about Travis Walton, the man who says he was abducted by aliens in 1975 in Netflix’s Top Secret UFO Projects.

Rebuttal to the Comment of the Day: “Travis, Youre an effin liar,” writes Tom Mullen.

Clarification: Travis Walton does not and has never written for MovieMaker, and to the best of our knowledge does not read the comments. But Travis, if you see this, please consider it an open invitation to write anything you’d like for us.

*: I have not seen every show on TV

Main image: The Roy family discuss “red flag movies” or whatever in the Succession Season 2 finale.