Medicinal Moviemaking: To Document a Spiritual Quest, Reality of Truth Zooms In On Shrooms and Other Psychedelics

“And when the dew that lay was gone up, behold, upon the face of the wilderness there lay a small round thing, as small as the hoar frost on the ground. And when the children of Israel saw if, they said one to another It is manna: for they wist not what it was. And Moses said unto them, This is the bread which the Lord hath given you to eat.”—From The Book of Exodus, 16:14

He had the parties. And the cars. He had the L.A. friends on speed dial and sold piles of self-help books to help others live the same dream.

By 2008, however, Mike Zapolin was so lost emotionally that he turned to The Bible for answers. The passage 16:14 from The Book of Exodus—and hundreds of others like it—stopped him in his tracks.

“Could the manna, which is referred to over and over again in The Bible, actually be mushrooms?,” asked Zapolin during a recent MovieMaker call. “Maybe those mushrooms held some hope for me?”

That question, like so many others related to psychedelic drugs, has since consumed the boyishly messianic entrepreneur who purchased a full-page New York Times ad this past January to celebrate the physical and psychological healing power of these natural plant “medicines.” He now dreams of the day when hallucinogens such as the ayahuasca vine, the San Pedro cactus or the African ibogaine root are commonly prescribed in America to break addictions to alcohol and heroin, or reduce reliance on prescription drugs like Ritalin, Adderral or Dexedrine.

A camera, aimed at himself and others, is now at the core of his quest to change people’s perceptions. His first foray into documentary filmmaking, 2016’s Reality of Truth featuring Deepak Chopra and actor Michelle Rodriguez (Fast & Furious), has already garnered millions of eyeballs and helped spur all sorts of non- and for-profit spinoffs into healing supplements and destination spas where the Class 1 restricted drugs are legal. He promises a second documentary by year end, Economic Terror, along with a weekly reality television show, Psychenauts, to convince America that there’s far more to consuming psychedelics than a bunch of stoners giggling around a campfire.

MovieMaker talked recently with Zapolin—Zappy to his friends—about how he walks the thin lines between films and infomercials, making money versus making lives better and what it will take to truly be taken seriously.

Deepak Chopra and Michelle Rodriguez in a scene from Reality of Truth. Photograph courtesy of Mike Zapolin

Paul Tukey, MovieMaker Magazine (MM): Why did you make Reality of Truth?

Mike Zapolin: I was having a sort of spiritual mid-life crisis of my own where I had kind of done everything society had told me to do and I was like, “Oh my God, I still feel like there are things that are unanswered for me.” Here I am, I did all the stuff that’s supposed to make me totally fulfilled and I’m not. So when you look at yourself in that moment, you could either go get a sports car or something to make yourself feel better. Instead, I felt like I’m gonna have to go to the root of what I’m thinking about right now and I’d like to try to figure out how to go deeper inside of myself.

MM: With a camera involved?

MZ: I have been involved with production for a long time. I had done infomercials in the early ’90s. I did a Super Bowl ad in 2000; I would participate in that whole process of making that really cool 30-second spot that you spend a half a million dollars making. So I was comfortable with production, but I never did a documentary per say. I mean, I did this thing with the Grateful Dead that was sort of a entertainment-meets-music-sales and it had a little documentary theme, but it was a TV show. I was inspired by people like Michael Moore, who just kind of went out and figured it out and got the story—and did it with the video running. I figured you just kind of cobble it together in some way. I had a lot of faith that that would happen.

MM: Well, it started with reading The Bible, right?

MZ: It was pretty clear to me that I was sort of reading about psychedelics in The Bible and I got excited about that. It was one of these moments where, even if there’s a chance that that’s true, then it means that everything down to maybe your most core belief about who you are and the world—everything—is totally wrong. Holy God, if that’s not something to try explore then what is? I was lucky enough to know Deepak Chopra from doing a project with him years earlier. I was sitting by the phone going, “Ah, I really wanna call Deepak and tell him what I found, but also he might think I am so nuts he never talks to me again.” So I called him up and said, “I think these are psychedelic mushrooms here in The Bible. This description, using my modern scientific knowledge, there is nothing else this could really be describing.” I was waiting for Deepak to say no. He was silent on the phone and Deepak is very rarely silent.

“Could the manna, which is referred to over and over again in The Bible, actually be mushrooms?,” asked Reality of Truth director Mike Zapolin on a call with MovieMaker. Image courtesy of Sweet Publishing/FreeBibleimages.org

MM: So you go see him in person? With the cameraman?

MZ: He suggested we do a sit down and I said I would do a book. He said, “Nah, this is too important. Why don’t we do a video recording?” So I called up my wife’s cousin (Laurent Levy), who I had done photography work with. I knew he knew how to capture the conversation from me and Deepak in a way that would be a lot more interesting than just a video Deepak normally would do. We recorded the whole 60 minutes of the interview; each five-minute block could be its own movie, that’s how amazing it was.

MM: So you had started a documentary at this point in the process.

MZ: At the end of that first conversation, when we were wrapping it up, I say, “So what do we do now?” And he said, “Have a party.” I said, “What? Bring people down to Peru and put some [mushrooms] in the pot?” And he said, “Yeah, put it in the pot and drink it—that’s what you gotta do.” So right there, I was like, “Wow, I have this spine of a movie already, a documentary.”

MM: So you have Deepak as a calling card. How did you land Michelle Rodriguez too? It’s quite a coup to have an A-list actress literally and figuratively go on a trip with you.

MZ: Laurent knew Michelle from doing photo shoots and things like that and so I had him put me in touch with her. I told her what we were planning with the ayahuasca in Peru and she was immediately psyched about it. She said she’d been thinking about doing it for awhile, was trying to find the right time and place and group. We just became fast friends and the timing was just really, really right. Probably my favorite part of Reality of Truth is that you really get to see Michelle Rodriguez’s transformation where she goes from really cool, but kind of a protective edge, to where she describes 20 years of therapy—just weight off her shoulders. She stepped into her femininity. We could see that she was completely changed after the ayahuasca experience. 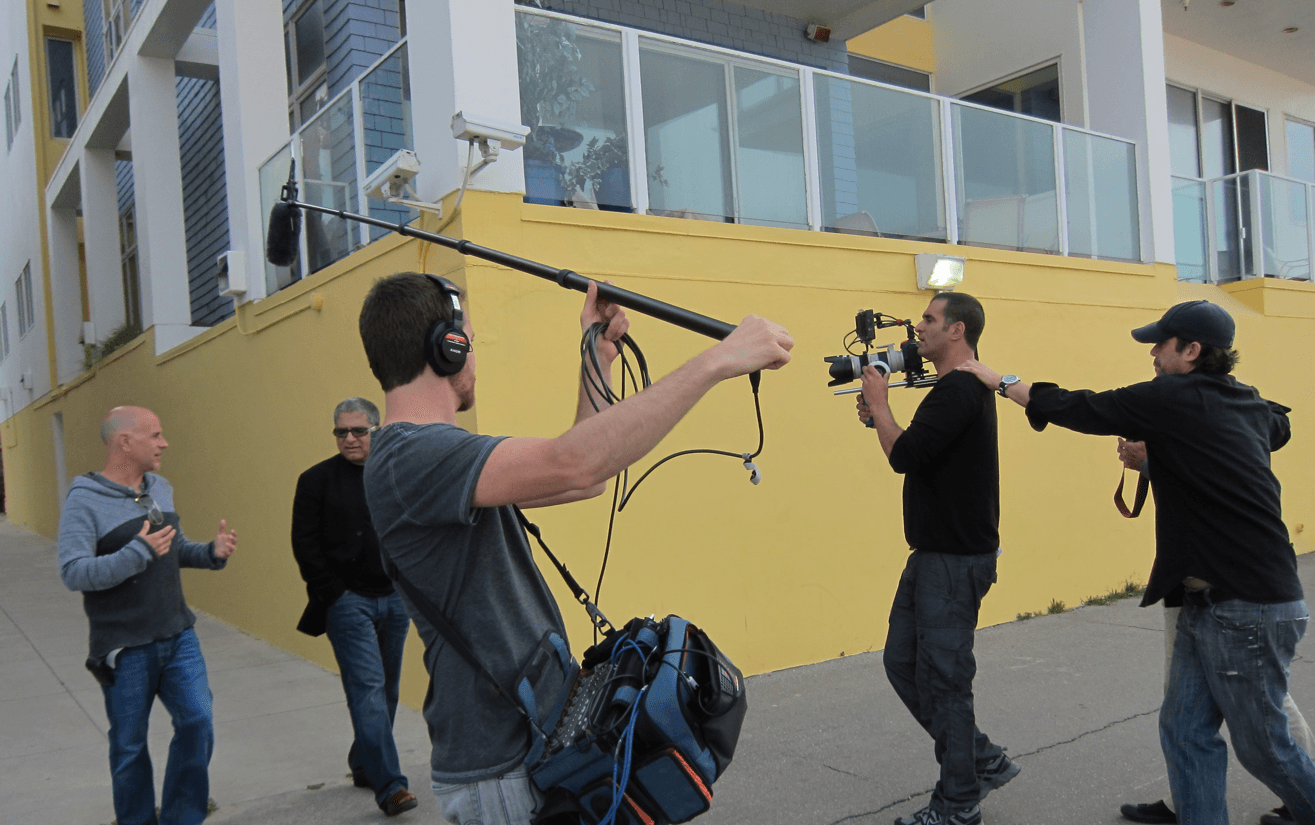 MM: That was several years ago now, right? What happened in the interim until the project came out last year?

MZ: As a filmmaker you’re always saying, “I should just finish this now and wrap this up and put a bow on it.” But one of my strategies toward finishing was to put out press about what I was doing—so that I didn’t have to call everybody up. From that, I got a call from one of the guys whose apartment who I had used for that original Deepka interview in Santa Monica. He had this oceanfront place and the deal was that we could use his place, but he wanted to watch the interview, meet Deepak, take pictures and that kind of thing. I didn’t know it at the time, but despite having sold his company for almost a hundred million dollars he was addicted to drugs. He was shooting Demerol and drinking in a real death spiral.

MM: Gerard Powell. He’s the guy in your film who said he was healed by taking a “trip” with the plant medicines.

MZ: He said, “Hey, Zap, you’re not gonna believe this. If you remember me, I was in Thailand and I was really abusing drugs and someone saw me, a friend of mine, and they thought I was gonna die and told me to get on a plane and go to Coasta Rica to do this ibogaine plant medicine to break addiction. Hearing you and Deepak talk about it that day in my apartment it resonated with me, but I never really wanted to deal with it.” Gerry went on to build the Rythmia Center in Costa Rica where people could go to do plant medicine. “I felt like, “Wow, that’s like such an incredible part of this story, I have to incorporate it into the movie. I can’t even finish until I come down there to Costa Rica and hang out.”

They’re Just Like Us: Jeff Baena on Adapting a 14th-century Text for Modern Audiences with The Little Hours
Scorched Earth Unearthed: This Moviemaker Knew Nothing About the Guatemalan Genocide… Until He Made Finding Oscar