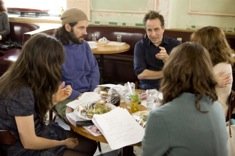 In 2001, Paul Rudd appeared as the unworldly American inheritor of a French mansion in The Château, directed by Grammy Award-winning music video director Jesse Peretz. Since then, Peretz has directed just one other feature—The Ex, starring Amanda Peet and Jason Bateman—while Rudd has perfected the role of the sarcastic-but-sweet man-child in films like Knocked Up, Role Models (which he also wrote) and I Love You, Man, earning himself a reputation as one of the most likable guys in movies.

Ten years after their first collaboration, Rudd and Peretz are re-teaming for Our Idiot Brother, the story of the hopelessly naïve Ned (Rudd) who disrupts the lives of his three sisters (Elizabeth Banks, Zooey Deschanel and Emily Mortimer). The film, which was shot on a RED ONE camera with an all-star cast and $10 million budget, is a far cry from the duo’s experience on The Château, an unscripted, no-budget feature shot with a handheld video camera.

MovieMaker played fly-on-the-wall as Rudd and Peretz interviewed each other about their ongoing collaboration and discussed the ever-important topics of beards, Elizabeth Banks and idiot brothers. Even if it did feel a bit awkward…

Paul Rudd (PR): Alright, Jesse. How are you?

JP: I’m good, man. I’m glad we have an excuse for you to come over from around the corner.

JP: How was the walk over here?

PR: Not bad. It was a little cooler than I thought. I was expecting 100 degrees, but that temperature has been cracked.

JP: It’ll come back… Speaking of 100-degree weather, what was the worst thing about the decision to do this movie with me last summer?

PR: God, it was crazy hot, wasn’t it? That was tough. We were shooting in all these places where the air conditioning was a little suspect or nonexistent and there were pregnant women on the crew of our movie. It was one of those ridiculous New York summers where it was like 110 degrees.

PR: It was the kind of hot where they say, “Don’t go outside if you don’t have to.” And then that first day, I was wearing that sweater, and then the hair and the beard.

JP: But when it’s hot like that, movie lights really do help cool it down. Movie lights will help take the edge off that.

PR: You wouldn’t think that would be the case, but it’s weird how that works. So… what was it like, Jesse?

PR: How many times have we worked together? Well, The Chateau was the first time.

JP: And the most significant.

PR: And the most significant. Because after that there were just little flyers. I worked a day on The Ex and then The Foo Fighters video that got banned.

JP: It got banned from MTV, but definitely plenty of people saw it. You’ve really got to be paying attention and slow that shit down to see the sweet work you did in The Foo Fighters video.

JP: You’re there in the TV.

PR: What scene is it?

JP: I believe we squirted a good load of Lubriderm from the backside of a prosthetic penis that was sticking up Donal’s pants onto your face.

PR: So it might not be a bad thing that you can’t really see it.

JP: You can’t really see it. But just knowing it’s there makes me happy.

PR: That was one of those spur-of-the-moment things, like, ‘Oh my God, there’s a bottle of lotion. Grab it!’ Well, that just certainly sounds cryptic enough if you read that in a magazine…

PR: So this was the first time we really worked together in…

PR: Almost 10 years. How was that for you? What was your favorite thing about me from your perspective? We’re just going off of these questions that have been suggested and it feels so weird to sit here and ask you these things.

JP: Paul, my favorite thing about working with you after these 10 years is that you are just as talented at playing the comedy and the drama as you were 10 years ago. In fact, you probably perfected playing both of those things simultaneously, which… see this is what’s awkward about doing this interview…

PR: I already feel so uncomfortable.

JP: Maybe we should step out of talking about ourselves. It was some sweet happiness that I convinced you to come and do this movie with us. My sister and my sister’s husband and I hoped we would craft it in such a way that maybe we could convince you to play this part.

PR: If that’s true—which I have my doubts—then you kind of crafted it. You were so sly about it.

JP: Sly about how I slipped it to you?

PR: Yeah. I had no idea. I just read it and thought, ‘This is awesome.’

JP: I know. You were super busy and we just decided to get the film almost to the place where it was happening to give you less reason to say no.

JP: Do you remember I had that eight-page treatment for that other project which took a couple of months for you to read and you decided you didn’t want to do it?

PR: Is that true?

PR: But that doesn’t make any sense that it would take me months to read an eight-page treatment.

JP: It’s alright. It was a good thing it didn’t happen.

PR: We’re good friends. We always have been. I don’t even remember that. God, is this what children do to you?

JP: I know. It really does. How many children do you have now, Paul?

PR: I’m like Screamin’ Jay Hawkins. ‘Fourteen!… That I know about!’ I have two just like you.

JP: Exactly. So, Paul, I have a question for you related to the movie. When we were shooting the scene where you run into the dance studio where you expect that Steve Coogan is hard at work doing a really deep and comprehensive interview with the subject of his film and you find him and her butt naked. Did you feel at that time that it would be funnier to see his penis that whole time or to actually keep his hand in front of his penis until he leaned over?

PR: I think we all had this debate when it was happening. The way Steve said the line as he was bending down for his keys and you shot him from behind so that you would see his testicles hanging down was really funny and kind of surprising. So I think ultimately covering himself was the funniest way to go. But I remember he did one where he made a gesture, then showed himself full frontal and then covered himself up again. That was very funny.

JP: When I had first met with him about doing the movie, the first thing he talked about was how he was really exited about the idea of doing that scene without covering himself up.

PR: Kind of like in Short Cuts. Just standing there the whole time.

JP: That was a fun day working with Coogan.

PR: He’s really very funny. He’s so, so solid. I’m such a fan of his. Why can’t I remember that guy’s name? He’s so funny… You knew most of the people in this movie but you didn’t know Coogan.

PR: No. The only one I didn’t know was Coogan.

JP: I didn’t know Elizabeth, who I was really scared of at first.

JP: I was warned to have my act together and be decisive and know what I want. So the first time that I met with her and the first few days I was so scared of her. I was like, ‘Oh man, I gotta really sell that I’ve got a total and complete picture here.’ She ended up being one of the most easygoing out of the cast. I love Banks. And then, of course, my favorite discovery—who’s a friend of yours—was Catherine Hahn, who I think is a fucking comedic genius. It’s pretty exciting to see her having a little explosion of people finally taking note of how great she is.

PR: Yeah, she’s really super-talented… You really did assemble a group of great actors, me excluded. I just looked at who you cast, in the whole film, and I was so psyched.

JP: It was such a great group of people. They really helped pull you up and made you seem like you really knew what you were doing. Which isn’t to say that I don’t think you’re a pretty good actor. But I just think assembling an awesome cast like that really helped.

PR: It really helps you. You don’t want to slack off. The other thing that was great—I know you’re teasing me—

JP: That’s because you said “excluding me.”

PR: Well, ‘cause I’m saying you organized a great cast and then I’m in the cast, so it sounds a little pompous. But I look at someone like Adam Scott, who is one of my oldest friends, and Banks, who I’ve worked with on five or six different things, and Zooey, who I’ve worked with before and I know you’re good friends with her, too—there’s something great about that familiarity. It was a kind of family and everybody was just psyched to be there working on it. We all wrote the script.

For more information about how to subscribe to MovieMaker Magazine, check out the MovieMaker home page.