Outside In: Lynn Shelton and Jay Duplass on Rehearsals, Sex Scenes, What They Learned Working in TV, and More

When I met with Lynn Shelton after the premiere of Outside In at the 2018 SXSW Film Festival, I facetiously asked who her favorite Duplass brother to work with was, now that she’s directed both.

She worked with Mark Duplass on some of her earliest works like Humpday and Your Sister’s Sister, but in her new film, Jay Duplass—whose own acting career has been taking off—plays an ex-con struggling to re-adjust to life in his small town as he forms an intense bond with his former high school teacher, played by Edie Falco.

While Duplass and Shelton certainly aren’t strangers to the DIY world of indie moviemaking, they’ve each spent the last few years gaining a treasure trove of new experience. Lynn has become an in-demand director for television, working on hit shows like Master of None, Fresh off the Boat and GLOW, while Jay’s newfound transition to acting has led to him starring alongside brilliant performers in critical darlings like Landline, Beatriz at Dinner, and the Amazon series Transparent. As both return to their roots with their new film, I spoke with them about what they’ve learned, working with the great Edie Falco, and how their latest ventures impacted their work on Outside In.

Edie Falco in Lynn Shelton’s Outside In. Photograph by Nathan M. Miller, courtesy of The Orchard

On Working With Each Of the Duplass Brothers As An Actor

Lynn Shelton (LS): I can genuinely say they are both equally talented. I’ve only worked with Mark in an improvisatory way, so it was a very, very different experience working with each of them because Mark likes to give you as many options as possible when he’s improvising, so every take would be a completely different version of getting to the beats of the scene. I say that with a grain of salt. It wasn’t like wildly crazy, but he really does like to try out a lot of stuff so it’s very facile and a very different experience. Jay was very adamant that he wanted to be more scripted.

Jay Duplass (JD): Back in the day in Austin—this is almost 20 years ago—there was only one acting class in Austin, and Ron Hayden ran it, and he was himself a pupil of Sandy Meisner. A lot of the classes in Austin at that time were “how to be funny,” “how to be entertaining,” you know what I mean? How to get day-player roles. But Ron was running a class which was basically “how to be Brando.” I joke about it that it was a cult because, I mean, he was religious about it. He did not fuck around, and honestly, there weren’t a lot of people that could stay in the class because it was so rigorous. We were working 20 hours a week, couple classes a week, doing scene work preparations, and I honestly did that class as a director just to become more comfortable with acting in general because, especially coming from film school, directors are afraid of actors and actors are afraid of directors. And also, all actors should learn to direct.

But I was in this acting class to learn how to become a better director, and in retrospect I realize that acting was pretty natural for me; I am that person in my family where everybody is like, “can you stop having all the feelings? It’s a little uncomfortable.” And that’s just how I am. I feel things a lot, and it’s been really nice to get paid for that.

LS: I generally don’t. If I can, I like to at least spend a little bit of time with the actors to hang out, because for me I want to make sure I’m creating and emotionally safe space for creativity to happen because it’s very risky. But Jay & Edie really hit it off and made a connection which was great.

JD: Edie & I don’t like to rehearse a lot, we don’t like to over talk things. When script is very good we’re both very focused on script. When it needs help or when it could be better we’re ready to improvise.

On Acting Alongside Edie Falco in Outside In

JD: I was writing this with Lynn and we were rewriting it as we were going into hurry-up mode with producing it and making it, so I didn’t have time to think really clearly that Edie Falco was flying from New York to star opposite me! I was literally just trying to get the movie going with Lynn.

But It’s all about being present, and being in the moment every single time. It’s nuts that I’m even talking about Edie, she is the reason I love The Sopranos, she is the crown jewel of the whole show. But we were great scene partners. And you know, I’ve only been acting three or four years, she has been doing it 20 to 30 years with some of the best performances in television and film. Honestly, working with Edie is fucking insane.

Ben Schwartz and Jay Duplass in Outside In. Photograph by Nathan M. Miller, courtesy of The Orchard

On Shooting An Intimate Sex Scene

JD: I think that our MO was just joking and trying to keep it chill. We spent a lot of time together because it was a very small crew, and if anything we’re just trying not to talk about it. It was super charged when it was in the room. I think we both understood when you’re in love with somebody and everything is against it, there’s that throttle that’s happening that’s just like you can barely contain it in your body. So we’re both embodying that in our own unique character levels. So we’re just trying to charge that up as much as possible.

LS: I honestly don’t think I’m prouder of any other scene. I love that scene so much. And the fact that the whole thing—if I’m not incorrect—is two shots, one shot when they first come in, and it’s mostly one long shot through the whole thing. You don’t get impatient at any point, it never feels too long. And every single frame is amazing because of her face; she’s just one of those actors that everything that’s coming through her head is coming through her eyes and her expressions. It’s mind-blowing. 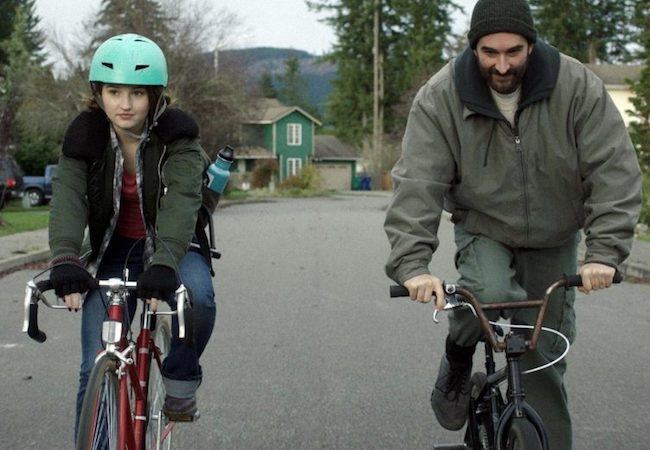 Kaitlyn Dever and Duplass in Outside In. Photograph by Nathan M. Miller, courtesy of The Orchard

On What They’ve Learned Working in Television

LS: I feel like I wasn’t even aware of it until I got on the set of Outside In  and I was thinking “Oh my god, I am so much more confident and at ease as a director.” Sometimes with sitcoms—and I’m so grateful for all of those opportunities because I think the writing is incredibly smart and funny on all of those shows; New Girl, Mindy Project, Fresh off the Boat, just incredibly smart writing—the actual structure of a network sitcom can be a little formulaic. You can be a little bit of a coverage wrangler as far as the cinematic aspect. So your focus is on trying to draw out the humor and well-rounded performances and all that.

But then I’ll work on a show like Maron or Casual or Master of None and it was like, “Oh my god, I feel like a filmmaker.” It’s so awesome, and it really is fulfilling and spoiling working on these. Like I got to work with Christian Sprenger and Mark Schwartzbard and all these amazing, amazing cinematographers. Learning so much from them, and learning so much from the actors, it’s just basically being on set so much. And you’re always thrown challenges. It’s like being on Chopped when you’re thrown a basket of ingredients and you’re like, “okay, what am I going to make of this crew and this cast that I’m just being handed to do.” And it’s always great material and great people to work with and stuff. And I get so lucky, I’ve never had a bad experience in television. It was four years in between and I was in development on films that we were pushing or didn’t quite come together, or whatever, so those four years without being on set it was so nice to be doing the TV stuff.

JD: I had this crash course in acting, but not only acting; acting with titans. Really with Transparent being in scenes with Jeffrey and Judith, and honestly—they aren’t as quote unquote “famous”—but like Amy and Gabby they are acting titans. Titans of personality. So I kind of got thrown into it and there’s so much emotion on that show so you just have to like full give over. So I feel like I’ve had this crazy crash course of just being in the middle of it.

On Being Heavily Involved In the Edit As a Director

LS: I started as an editor so I’m there every minute. I have only recently discovered that not every director does that. For me, that’s when it all happens. I’m sure you’ve heard this before that the final draft of the script happens in the edit room, but it’s really true with me. I’m all about finishing that balance of not making it too opaque of not pushing the audience away, but I don’t want to spoon-feed every bit of backstory and exposition because I feel if you can kind of create a breadcrumb trail for the audience to peak interest and create a trail in their mind so it engages them and they try to piece the story together. It just creates a more satisfying experience than just assuming they aren’t going to get anything and just shoving it in their mouth. And in the edit room you find out there is so much you can convey with faces and blank space and pauses. I always try to cover my ass on set to make sure that there’s enough.

LS: The two biggest pieces of advice from me for anybody is: Get on other people’s sets. I actually have a friend who said a mentor told him, “If you want a career in something, find someone you admire, go to them and say, ‘Let me help you in any way you can’.” Even just showing up and being a PA on somebody’s set, you learn so much. And if you make yourself indispensable people are going to say, “You, I want you.”

Number two: Just start making your own stuff. Find your tribe, even if it’s just one or two people, because it’s a collaborative art. You have no excuse, equipment is so cheap, you can edit on your laptop, figure things out, and learn all those technical skills on YouTube. You can do it for so cheap, with low stakes, and if you fail, you can learn from your failure and just sweep it under the rug. Start doing. MM