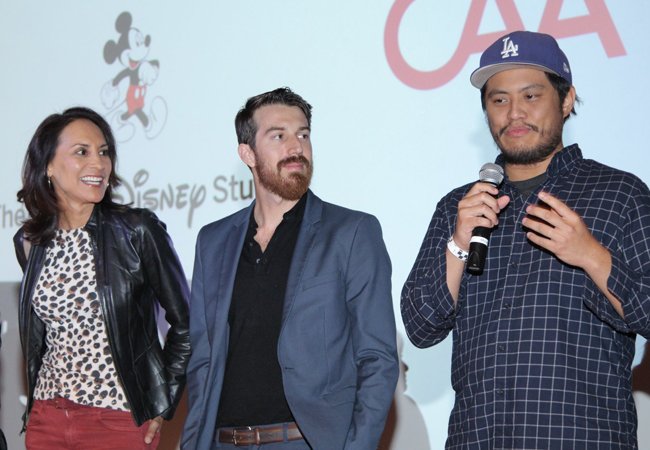 On November 16th, 2019, the NewFilmmakers Los Angeles  (NFMLA) Film Festival hosted “InFocus: Native Cinema” with support from UCLA’s American Indian Studies Center and the LA Skins Fest. The Festival line-up celebrated the poignant voices of emerging Native and Indigenous filmmakers, in addition to showcasing work from other innovative creators from around the globe.

The Festival kicked off with an InFocus: Native Cinema shorts program which offered a collection of films from Native and indigenous filmmakers dedicated to exploring questions of identity, femininity, cultural preservation and revival, and poetic resonance in the everyday. The evening continued with Shorts Program #2: The Monsters Inside, featuring a curation of thoughtful, and at moments haunting, examinations of protagonists metaphorically at odds with their bodies. The film festival closed with the World Premiere of Up The 5, an eclectic and character-driven feature-length comedy that navigates a range of comedic styles. NFMLA showcases films by filmmakers of all backgrounds throughout the year in addition to its special InFocus programming which celebrates diversity, inclusion and region. All filmmakers are welcome and encouraged to submit their projects which will be considered for all upcoming NFMLA Festivals, regardless of the InFocus programming.

About Patricia: Patricia Beckmann Wells, EdD is an independent filmmaker based out of Los Angeles, whose animated films run the spectrum of documentary to fantasy and have toured internationally to over 200 festivals.

About “Propolis, Part 7”: Locked in their closets as punishment, two siblings steel themselves to confront the abusive mother who put them there.

About Michelle: Michelle Salcedo is an award winning director with over 20 years experience in the entertainment industry.

About “Piel Canela (Cinnamon Skin”): A Cuban exile returns to her homeland in search of her daughter and unravels a secret that has haunted her for twenty years.

About Michael: Michael Thomas is a well-versed filmmaker whose notable credits include: “Pride Fighter” (2015), “Nadia’s Visa” (2018), “First Position.” (2018), and his partnership with Opera Philadelphia on the film interpretation of La Voix Humaine (2019).

About “First Position.”: A young, aspiring dancer moves to San Francisco in the 1980s, but his dreams and relationships are tested when he develops symptoms of a deadly disease.

Up The 5, directed by Gabriel Adams

About Gabriel: After moving to LA purely because his junior college misprinted his college transcripts, Gabriel Adams worked to become a seasoned filmmaker with experience on over 200 film and television projects.

About Up The 5: When Phill falls for the girl who steals his car, he’s forced to team up with an oddball traveler to track her down.

Watch the NFMLA interview with Gabriel Adams, director of Up The 5:

“Everything Looks Better on Fire,” directed by Elizabeth Hinkler

About Elizabeth: Passionate about advocating for human rights, mental health, persons with different abilities, and LGBTQIA rights, Elizabeth Hinkler’s work focuses on nuanced, multilayered character-driven stories that draw you into their mystery, and encourages audiences to discuss these multifaceted, yet essential conversations.

Watch the NFMLA interview with Elizabeth Hinkler, director of “Everything Looks Better on Fire”:

“The Bookends,” directed by Elizabeth Hinkler and Emily Hinkler

About Elizabeth: See above!

About Emily: Emily Hinkler is an up-and-coming actress and director who is uniquely focused in cultivating media that promotes loving connections in an increasingly fearful world.

About “The Bookends”: “The Bookends” is an exploration on the experiences of a pair of identical twins’ identity contingency, together and separately.

Watch the NFMLA interview with Elizabeth and Emily Hinkler, directors of
“The Bookends”: