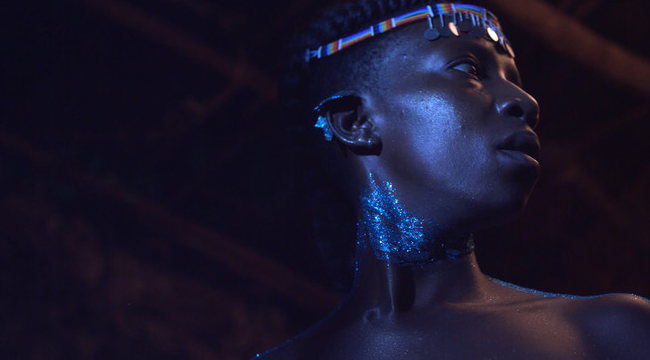 An ambitious fisherman encounters a mermaid-like water spirit. A man escapes pre-Civil War slavery to live as a free man. A pianist and painter develop an unexpected relationship. And a South African community’s struggles during the COVID lockdown. These are just a few of the stories highlighted at the NewFilmmakers Los Angeles (NFMLA) Film Festival that showcased promising directors tackling stories about human existence, adversity, community and inspiration.

The festival began with a shorts program titled “Winter Shorts”, where emerging directors showcased their voices through a wide range of genres. This section was followed by InFocus: Black Cinema Shorts, celebrating inspiring stories as well as Black filmmakers and talent in front and behind the camera. The festival concluded with the InFocus: Black Cinema Feature screening of the captivating and fantastical Taliya, the feature film directorial debut of award-winning Kenyan TV writer-director Arnold Mwanjila.

Here is some info on the filmmakers and their films as well as their video interviews with NFMLA Board Chair Danny De Lillo (Twitter/Instagram: @dannydelillo).

About Arnold: Arnold is a writer and director based in Nairobi, Kenya. He graduated from Columbia University with a degree in Film Studies and Economics. He has worked in multiple capacities in the film and TV industries and in theatre, both in New York and in Nairobi, and has written and directed episodes for various home-grown award-winning TV shows.

About Taliya: In an idyllic fishing village off the coast of Kenya, Babu, a poor and ambitious but self-centered fisherman, ensnares Taliya, a mermaid-like water spirit, in stolen nets. Babu decides to exploit Taliya as a grand magical theatrical exhibit for personal wealth and power. Taliya must create her own plan, using Babu’s own eight-year-old son as a crucial part of her exit strategy.

Watch the NFMLA interview with Arnold Mwajila, director of “Taliya”:

“Down”, directed by Garry Crystal

About Garry: Garry’s short films “Bertie,” “The Fox and the Rabbit” and “Bobby” have been selected for and won awards at numerous Academy Award and BAFTA qualifying international film festivals. Garry also works as a freelance documentary editor and has edited BAFTA, Emmy, Grierson and RTS-winning and nominated documentaries and films.

About “Down”: Two strangers are trapped in an elevator. One is dying; the other is dying to escape.

Watch the NFMLA interview with Garry Crystal, director of “Down”:

About Jon: Jon is a five-year NFL veteran turned award-winning filmmaker. After graduating from Stanford University, Jon enrolled at the School of Cinematic Arts at the University of Southern California to pursue an MFA in Film and Television Production. From 2018 to 2020, Jon served as Story Editor on the hit CW/Netflix television series All American. Most recently, Jon directed and executive produced the award-winning short film, Augustus and won the Directorial Discovery Grand Prize at the Rhode Island International Film Festival in addition to being awarded the distinction of Best Director at multiple festivals in 2020.

About “Augustus”: Augustus, a literate, escaped slave masquerading as a free man in Massachusetts just prior to the Civil War, experiences nightmares of his son’s death and a future America that resembles the struggles of his own time. Augustus soon realizes the horrors of slavery and racial inequality will only continue if he remains complicit. He’s left with one choice: speak out or risk his freedom.

Watch the NFMLA interview with Jon Alston, director of “Augustus”:

About JJ: Born and raised in Denver, Colorado, JJ attended Harvard University, where he studied urbanization and globalization in Latin America. After graduating with honors, JJ moved to Los Angeles to pursue a career in film. He has written and directed several short films and is currently developing his first feature film.

About “Date Nite”: After the spread of a virus that preys on the biological impulse for romantic desire, life in America is forced to recalibrate to a world where feelings of love can trigger crippling physical consequences. But Jon was OG lonely, a desolate soul long before repression became the norm. Terrified of disfigurement, but more terrified of having never loved at all, Jon refuses to passively accept his loneliness, and dares to download a deep web dating app. Soon he matches with a woman equally desperate for human connection and they go ahead with a candlelit dinner for two. But when his unfettered feelings lead to stupefying incapacitation, he must reckon with perils of all he stands to lose.

Watch the NFMLA interview with JJ Shpall and Eric Brewster, director and writer of “Date Nite”:

About Dewun: Ghanaian-American filmmaker Déwun Owusu is a visual story-teller with over a decade of experience producing award winning content that spans a multitude of industries and continents. Pulling inspiration from his heritage, Déwun has shifted his focus to content centered around African experiences and culture.

About “Lockdown Lunch Club”: On March 26, 2020, South Africa was placed under one of the world’s strictest Covid-19 lockdowns. Among the hardest hit during these times were the poverty stricken townships of the country. In Langa, the country’s first planned township, a group of unlikely heroes stepped up to sustain their community and show them that the future is in their hands, they just have to build it.

About Sarah Louise: A recent graduate from South Seas Film and Television School in New Zealand, Sarah is a drama director, screenwriter and filmmaker. Sarah made her directorial debut with her short film Tamatoa which has been screened in both national and international film festivals. She is passionate about stories with heart and impact, using film as her language to reach audiences and story as the soul of her craft. Maddick is an emerging director, with her focus on finding her cinematic style and writing/directing stories with provocative and emotional themes.

About “Tamatoa”: A coming of age short film based on a young Maori boy, Toa, who has Autism, navigating the challenges of his condition and his internal perspective of the outside world. As tensions rise at Toa’s school, he is faced with a decision. Will he retaliate against his bullies or will he find another way to overcome the conflict?

About Kameishia: Kameishia Wooten is a passionate writer-director who creates provoking, inclusive, socially impactful stories for film and television. She has written, directed, and produced six short films and created a web series titled Man of the House. Kameishia was selected as a Women In Film/Sundance Financing Intensive Fellow and most recently, was selected to take part in the 2021 Alliance of Women Director’s Black Directors Initiative. Originally from Goldsboro, North Carolina, Kameishia earned her Masters in film from Columbia College Chicago and is a proud UNC Chapel Hill undergraduate.

About “Destiny’s Road”: At her high school graduation party, a teenage girl whose only chance of making it out of poverty is through college, scrambles to recover stolen tuition money before reliant family members catch on to her secret.

About Brendan: Brendan Bennett is a filmmaker raised on Bainbridge Island, Washington. He recently produced a virtual short with partners including Amazon Studios, Universal, WB, and Technicolor. Currently, Brendan is coordinating test shoots for the ASC, exploring different use-cases and workflows using Unreal Engine. Brendan graduated from USC School of Cinematic Arts and works as a producer and writer, telling poignant, dramatic stories with a dash of dark humor.

About Jamie: Jamie McNeill is a freelance producer and production strategist dedicated to supporting ambitious creators and interesting worlds in order to emotionally connect people across the globe to create a more empathetic future. His focus is on fostering creativity and creating meaningful, impactful, and compelling content rooted in inspiring themes and breathtaking visuals.

About “Cutioner.exe”: When searching for a human connection in an AI-dominated world, a standard technician will go to any cost to find companionship.

Watch the NFMLA interview with Brendan Bennett and Jamie McNeill, director and producer of “Cutioner.exe”:

“Out of Place”, directed by Tracy Shen

About Tracy: Tracy is a Chinese writer-director currently based in Los Angeles. Her shorts were selected to BAFTA Student Shortlist and Oscar-qualifying festivals such as Cleveland, LA Shorts, St. Louis, and Nashville. Her feature screenplay, A Graduation, is selected to participate in the Cine Qua Non Script Revision Lab, sponsored by IMCINE and the Academy. She is also a member of the BAFTA LA Newcomers Program. She graduated with honors from Columbia University and recently obtained her MFA in Directing from the AFI Conservatory.

About “Out of Place”: A dual narrative film that explores both the disconnection and the connection between two immigrant lives in the United States. A young aspiring Chinese pianist and a Mexican house painter, unaware of them being neighbors, go through a day of disillusionment in symphony. Their stories, in its core, are to examine a universal longing to belong and the unfortunate reality of feeling still, out of place.

Watch the NFMLA interview with Tracy Shen, director of “Out of Place”:

8 Little-Known Facts About Princess Margaret From Elizabeth and Margaret: Love and Loyalty
David Fincher: ‘Perfectionism Is a Term That’s Thrown About Mostly by People Who Are Lazy’