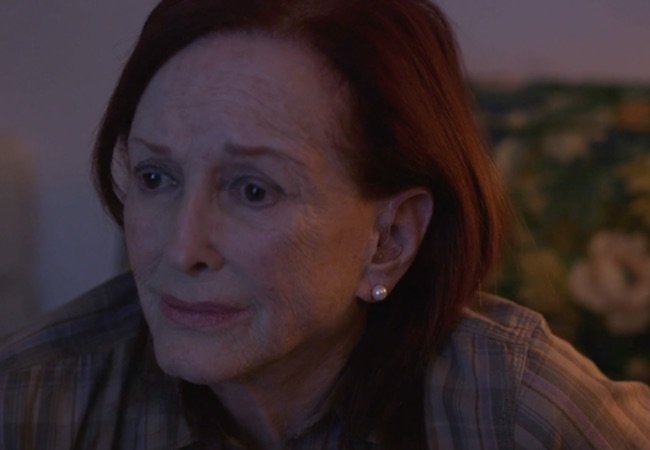 A queer teenager discovers her grandfather was once in love with another man, a devoted sister seeks to save her brother’s life by auctioning off a heart, and two football fan brothers bump into a headphone-wearing donkey in a recent New Filmmakers Los Angeles (NFMLA) film festival against ageism.

The evening, held on Jan.11, continued with the feature film Inside the Rain, Aaron Fisher’s authentic portrait of bipolar disorder and depression wrapped up in a wincingly funny rom-com-drama. The night concluded with a shorts program featuring an international blend of stories that explore generational disconnection, love and sacrifice — as well as the world of counterfeit bag merchants.

Here’s more about the films and the filmmakers.

“What’s In The Box?” directed by Ryan Kelly

About Ryan: Ryan Kelly is a United States Navy veteran turned filmmaker with a passion for cinematography and telling important stories through short film.

About “What’s In The Box?”: An off-duty lifeguard has to tangle with the law in order to keep the contents of a package out of their hands.

Watch the NFMLA interview with Ryan Kelly, director of “What’s In The Box?”:

Won’t You Take 10 Seconds to Sign Up for Our Newsletter, The Movie News Rundown?

About Robyn: Robyn Killian is a fine artist, photographer, and jewelry designer with a passion for filmmaking.

About “VISION”: The film follows the unique relationship between blind dogs and their dog parents, as their owners begin to learn that blind dogs don’t see with their eyes, but with their hearts.

Watch the NFMLA interview with Robyn Killian, director of VISION:

“This Land” directed by Michael Aloyan

About Michael: In his sophomore year of college, acclaimed filmmaker Michael Aloyan penned an original TV pilot that sold to 20th Century Fox Television, kickstarting his prolific career in filmmaking.

About “This Land”: The film is an immigrant love story told on the backdrop of the counterfeit designer bag industry.

Watch the NFMLA interview with Michael Aloyan, director of This Land:

About Yves: Yves Piat is an Oscar-nominated filmmaker who discovered the world of cinema through his technician work as a decorator and studio manager on set for the production of “Fouillet Wieber.”

About “Nefta Football Club”: The Oscar-nominated short film is about two football fan brothers who bump into a donkey lost in the middle of the desert on the border of Algeria, south of Tunisia.

About Katie: Katie Lemon is a writer/director from Austin, Texas now based in Los Angeles, and her work explores themes of family and personal identity.

About “Gail”: A recently widowed woman who used to take partner dancing classes with her husband must decide whether to remain stifled by her grief or muster the courage to dance on her own.

Watch the NFMLA interview with Katie Lemon, director of “Gail” (a still from the film is pictured in main image, above):

About Patrick: Patrick Fritz is a filmmaker, writer, director, and production designer who tells heartwarming stories of diverse LGBTQ characters.

About “Elijah”: A queer teenager struggles to come out, but when she makes the miraculous discovery that her grandfather was once in love with another man, she convinces him to take on the challenge of telling their family together.

Watch the NFMLA interview with Patrick Fritz, director of Elijah:

“THE AUCTION” directed by Alia Tompkins

About Alia: Alia Tompkins is passionate about telling stories that provoke thought and change. She was born in the melting pot of Southern California, and then spent years of her upbringing in Doha, Qatar. Her time living in the Middle East ignited her passion for storytelling and crafting an intercultural dialogue.

About “THE AUCTION”: A devoted sister is given a chance to save her brother’s life when she discovers the first ever auction of a human heart.

Watch the NFMLA interview with Alia Tompkins, director of “THE AUCTION”:

Best Places to Live and Work as a Moviemaker, 2020
The Past Is Now: Movies Have Never Been Better