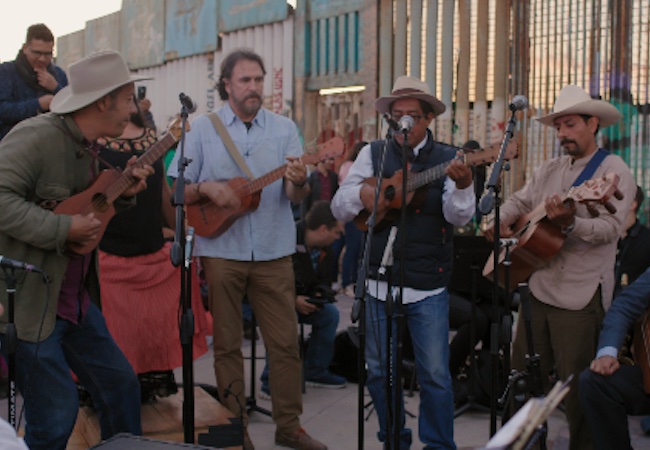 A college student with a secret, a power-hungry leader, and an estranged son are among the people explored in a NewFilmmakers Los Angeles and Academy of Motion Picture Arts & Sciences focus on Latinx and Hispanic Cinema. It also highlighted the new documentary Fandango at the Wall, about a cross-border concert.

The first program showcased people trying to define reality, and was followed by the premiere of HBO’s documentary Fandango At The Wall by Varda Bar-Kar, which tells the story of a concert that took place simultaneously on both sides of the U.S.-Mexico border. The third and final program of the night concluded with shorts that meditated on both geographical homes and finding a home in others.

Here are interviews with the filmmakers.

“The Catch,” directed by Thais Drassinower

About Thais: Peruvian director Thais has toured and showcased her work internationally, and currently she is in the process of developing her first feature-length film.

About “The Catch”: Abril, a trapeze flyer married to her catcher-partner Andre, prepares to jump 46 feet in the air and into his arms. But the trust between them is unexpectedly threatened, along with their relationship, their careers and their lives.

Watch the NFMLA interview with Thais Drassinower, director of “The Catch”:

About Alberto: Alberto’s diverse body of work — ranging from shorts to commercials to television — has garnered tens of millions of views, praise from the global media, and interest from acclaimed film festivals including SXSW.

About “After Life Vacation”: A newly wedded couple enters a travel agency to book their most important journey: the one that begins when you die.

Watch the NFMLA interview with Alberto Belli, director of “After Life Vacation”:

About Gabriela: As a writer and performer, Gabriela has toured her one-woman show, Las Garcia, across sold-out venues in L.A. As a filmmaker, she explores pressing social issues through personal stories and alternative forms of documentation.

About “Papi”: A daughter uses memory and a special day at the beach in the Dominican Republic to capture her father’s vibrant, at times performative, and always loving spirit.

Watch the NFMLA interview with Gabriela Ortega, director of “Papi”:

“Being In,” directed by Victor M. Rocha

About Victor: Victor hopes to work his way into a writer’s room and become a staff writer for comedy television, but above all else, he strives for inclusion and the accurate representation of BIPOC and LGBTQ+ people in the mainstream media.

bout “Being In”: As someone who is out as gay in school but not at home, Adrian has 24 hours to “go straight again” with the help of his friends before his mom arrives for a visit. However, the night before she arrives, Adrian begins to question whether this is the right choice.

Watch the NFMLA interview with Victor M. Rocha, director of “Being In”:

About Jon: Jon began his career directing music videos for punk and indie bands, but now as an MFA candidate in Stanford’s Documentary Program, he endeavors to highlight issues pertaining to the Latinx diaspora such as indigeneity, colonialism, and generational trauma.

About “Manzanal”: Rufina Amaya recounts the events on December 11th, 1981: a large contingent of army soldiers arrived at the district La Guacamaya in the hamlet El Mozote, which resulted in the largest massacre in modern Latin America.

Fandango at the Wall, directed by Varda Bar-Kar and produced by Kabir Sehgal

About Kabir: Kabir is a military veteran, finance executive, music composer, film producer, and award-winning author with acclaim from The New York Times, The Wall Street Journal, the Grammys, and more.

About Fandango at the Wall: Maestro Arturo O’Farrill comes together with the masters of a 300-year-old folk music tradition called son jarocho for a music festival called “Fandango Fronterizo” that takes place simultaneously on both sides of the United States-Mexico border.

Watch the NFMLA interview with Varda Bar-Kar, director of Fandango at the Wall:

“Lift Off,” directed by Alyssa Toledo

About Alyssa: Completing her B.A. in film production, Alyssa made shorts and music videos before becoming enthralled with filmmaking, and now she is working on two feature scripts as well as developing her TV series.

About “Lift Off”: The relationship between a young boy’s childhood dreams and his adult reality becomes symbiotic.

Watch the NFMLA interview with Alyssa Toledo, director of “Lift Off”:

About Kate: Kate’s years as a photographer and global brands collaborator led to her becoming a creative producer and director, where she now finds a passion for storytelling through film.

About “Chronology”: A time-travel drama about a woman forced to confront her different selves, each at different stages in life. She realizes that the rules she’s been faithfully following are due for reassessment.

Watch the NFMLA interview with Kate Romero, director of “Chronology”:

About Fernanda: Finishing her degree at the New York Film Academy, Fernanda juggles academics and part-time jobs, all while writing and directing five films — with more to come.

About “Undocumented”: Everything comes to a standstill when a family finds out that their daughter, who lives across the country, has been in a tragic accident, and the one thing that stands between them are documentation papers.

Watch the NFMLA interview with Fernanda Belmar, director of “Undocumented”:

About Miguel: Besides making PSA’s for the Coalition for Humane Immigrant Rights and creating multiple award-winning films, Miguel has been honored as an Outfest 2019 Screenwriting Lab Fellow and co-founded the independent production company, Cabaldana Alchemy.

About “Acuitzeramo”: Salvador, a gay Mexican elder who has lost his partner of 15 years, calls his partner’s estranged son, Anthony, to tell him of his father’s passing.

About Pablo: Pablo has more than fifteen years of experience in the audiovisual field and has participated in many festivals, such as the Short Film Corner of the Cannes Film Festival 2017 and Festival Internacional de Cine de Morelia 2017.

About “Water Dreams”: An old Mayan woman dreams about being a crocodile and facing a night owl that stalks her. Growing tired of it, she searches for a shaman’s help.

About João: After finishing his AFI thesis film “Dia De Las Carpas,” João won the DGA Student Grand Prize for Latino Directors and has been featured in prestigious showcases such as CAA Moebius, SAG-AFTRA Foundation and Oscar-qualifying film festivals.

About “Día De Las Carpas”: After an immigration raid in their apartment building, a group of boys helps an undocumented girl get to the beach to reunite with her family, unaware that their new friend has a magical secret that will change their lives forever.

About Nicole: Nicole is the co-founder of the independent production company 6pm Films based in Mexico City, where she has directed award-winning narrative, documentary and commercial projects.

About “The Little Thief”: A young boy experiences the feeling of guilt for the first time after stealing a bean from a local market in the early 1950s.

Watch the NFMLA interview with Nicole Vanden Broeck, director of “The Little Thief”:

Main image: Fandango at the Wall.