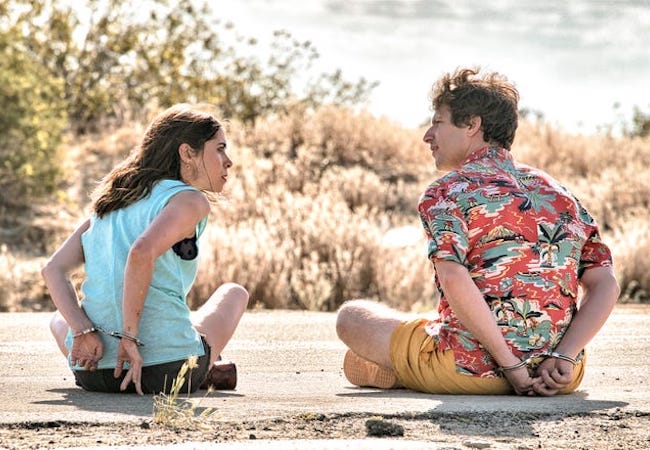 In today’s Movie News Rundown: Everyone’s bluffing about the Palm Springs ending; if you won’t let Tom Cruise blow up your bridge, someone else will; and how Amy Seimetz channeled her new homeowner anxiety into She Dies Tomorrow. Plus: We are uncomfortable saying the name of a new Amy Adams project.

Amy Seimetz at the Drive-In: Seimetz’s new film She Dies Tomorrow is in drive-ins today, and here’s Harper Lambert’s terrific profile on Seimetz. It starts by explaining how Seimetz started feeling a sense of anxiety as soon as she bought a home — and how she used that for the film.

Palm Springs Ending, Unexplained: No spoilers, but maybe skip this one if you haven’t seen Palm Springs, the excellent new rom-com starring Andy Samberg and Cristin Milioti. Many headlines include the words “Palm Springs Ending Explained” to suggest that they, you know, do that. But let’s save you a lot of reading: None of them, even from outlets like The Los Angeles Times, Slate, and Esquire, actually explain the ending, which is supposed to be open to some interpretation. “I feel like I know exactly what happens. Other people involved in the making of the movie feel something different happened,” screenwriter Andy Siara told Decider. “Therefore, I feel like it’s best to leave it up to the viewer to decide what that final scene actually is.”

“Palm Springs Ending Explained by Andy Samberg”: Is the misleading name of this clip where he doesn’t actually explain the ending, but does explain the process of arriving at the ending, which is still interesting:

Sammy Davis Jr. and Kim Novak Were a Thing?: Deadline reports on an intriguing project from director Janet Mock about a secret romance between Davis (Hollywood Emmy nominee Jeremy Pope) and Novak (not yet cast), at a time when their interracial affair was seen as Scandalous!, which is also the title of the film.

Would You Let Tom Cruise Blow Up Your Bridge? Polish news outlet The First News says the new Mission: Impossible movie wants to blow up a 111-year old bridge. Pros: Our bridge could be in a movie! Cons: They would blow it up though. Missing: From The Story is confirmation that Mission: Impossible does indeed want to blow up the bridge. I have sought comment and will report back if I learn anything.

Nightbitch: I’m just repeating the title, folks, of an upcoming debut novel by Rachel Yoder that Annapurna Pictures just bought as a starring vehicle for Amy Adams,  according to Deadline. It’s the story of a former artist who, after the birth of her son, becomes a stay-at-home mom convinced she’s turning into a dog. It also sounds like the name of an ’80s Orange County hair band,  but I guess it got all of our attention, didn’t it?

The Business of Drugs: On the latest Low Key podcast, we talk about how well Netflix’s new docuseries makes the case for drug legalization. You can listen to on Apple or Spotify or right here: